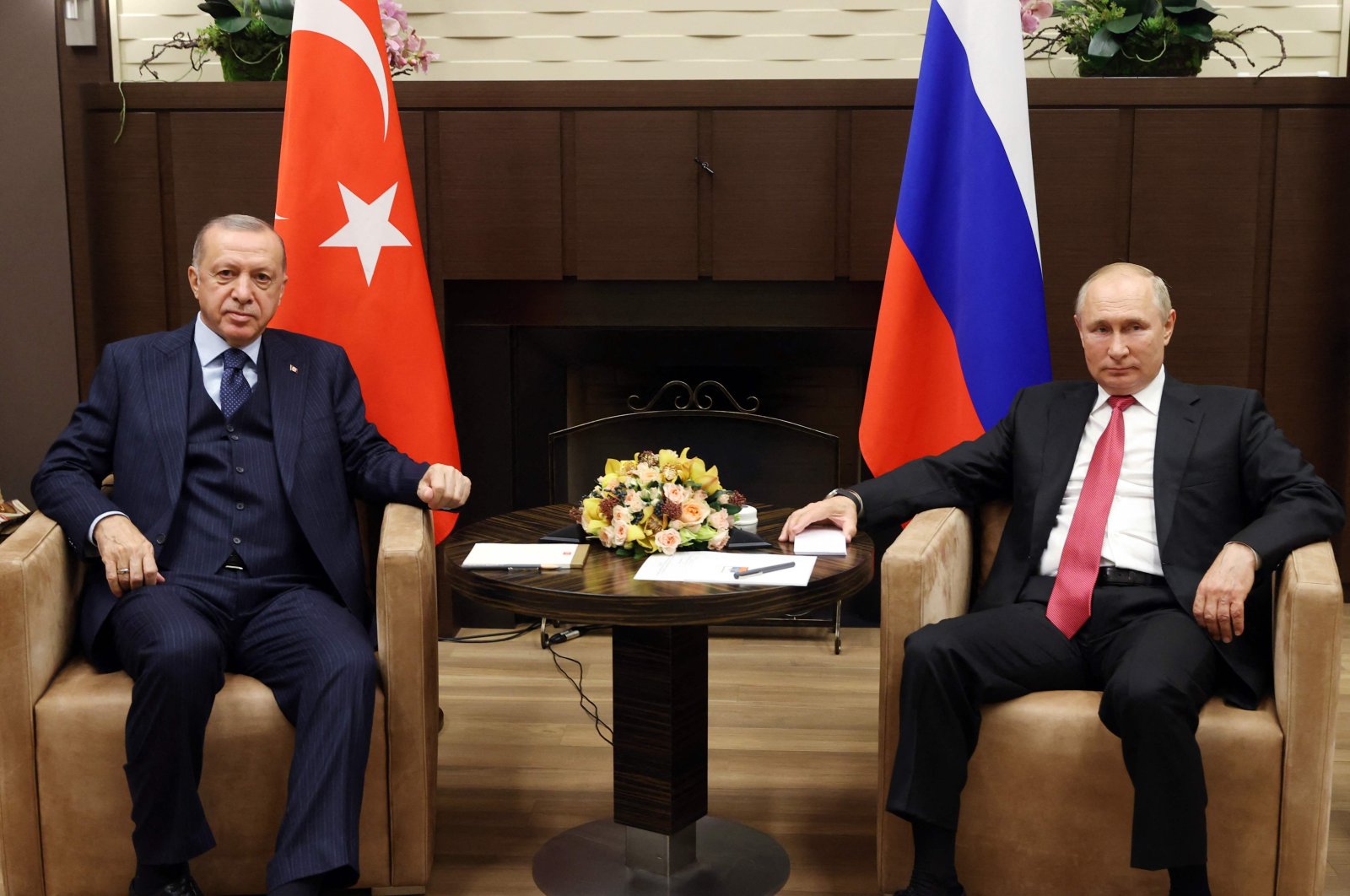 Peace in war-torn Syria depends on relations between Turkey and Russia, President Recep Tayyip Erdoğan said Wednesday, highlighting the importance of steps taken by both countries in Syria.

“It would be beneficial if Turkey-Russia relations continue in a stronger manner every day, I believe,” Erdoğan said during his visit to Russia ahead of his meeting with Russian counterpart Vladimir Putin in Sochi.

The presidents of Russia and Turkey on Wednesday began talks on curbing renewed violence in northwestern Syria and on possibly expanding Moscow's sales of military defense systems to Ankara despite U.S. objections.

Turkish officials said before the meeting that Erdoğan would press Putin to return to a cease-fire agreed last year to end a Russian and Syrian regime army assault on Turkey-backed opposition groups in Syria's Idlib region.

"The steps we take together regarding Syria carry great importance. The peace there is dependent on Turkey-Russia ties," Erdoğan told Putin at the start of their talks.

Meanwhile, Putin made only a passing reference to Syria in his opening comments, saying it was one of the areas where the two countries cooperated fairly successfully.

The Russian president highlighted the idea that the two countries are able to overcome differences through dialogue.

"Our meetings do not always proceed without problems, but relevant institutions are able to overcome issues to reach resolutions," Putin said.

Putin also touched upon cooperation with Turkey in the Nagorno-Karabakh crisis, saying that it is an important element in maintaining the cease-fire and ensuring permanent peace in the area in the future.

He said Moscow's cooperation with Ankara on Syria and Libya has also been moving forward successfully in the global scheme of things.

Erdoğan was also expected to touch on the issue of terrorists in the region and ask for the end of PKK's Syrian branch YPG presence in Tal Rifaat and Manbij regions in accordance with the Astana agreements.

YPG terrorists remain in Syria’s northwestern Tal Rifaat region in a proximity that could pose a threat to civilians and to the Turkish Armed Forces (TSK) trying to eliminate the humanitarian crisis in the area.

According to an agreement between Russia and Turkey on northeastern Syria and the establishment of a safe zone that would aid the return of Syrian refugees while preventing the formation of a terror corridor to Turkey’s south, Russia was set to drive YPG elements from the area.

He was also expected to underline that the decision that terrorist elements must withdraw 30 kilometers (18 miles) south from the east of the Euphrates and that YPG/PKK attacks from Russia-controlled areas be prevented.

The joint fight against Daesh was another topic to be addressed.

"We are abiding by the principles of the agreement reached with Russia," Turkey's Defense Minister Hulusi Akar on Tuesday told reporters. "We expect the other side to also abide by their responsibilities under the agreement."

Moscow says Russian forces are in Syria at the official invitation of Bashar Assad and that the presence of other forces is hindering his efforts to reunite and rebuild the war-torn country.

In March last year, Turkish land and air forces stemmed a Russian and Syrian regime assault that displaced 1 million people, brought Ankara and Moscow close to direct confrontation and threatened another wave of migration into Turkey, which is already hosting 3.6 million Syrian refugees. Due to the escalating violence, Turkey launched Operation Spring Shield.

During the past few years, Russian warplanes have targeted the areas under the control of the Syrian opposition, initially launching attacks from the Hmeimim air base in the west of the country.

Human rights organizations have published several reports blaming Russia for the death of tens of thousands of civilians in Syria since its intervention in 2015, while the international community has taken some actions against the Russia-backed Assad regime’s war crimes.

Furthermore, Putin and Assad recently met in Moscow to discuss the cooperation between their forces and how to continue operations to gain control of the last opposition-held areas in Syria. Putin blasted the presence of “foreign forces" in parts of Syria – an apparent reference to hundreds of U.S. troops who are in eastern Syria working with the PKK terrorists group’s Syrian wing, the YPG, as well as to Turkish troops in northern Syria who are stationed there to protect vulnerable civilians and hinder terror attacks. Putin has said that the presence of the foreign forces is illegal as they have not been granted approval by the U.N. or the Assad regime.