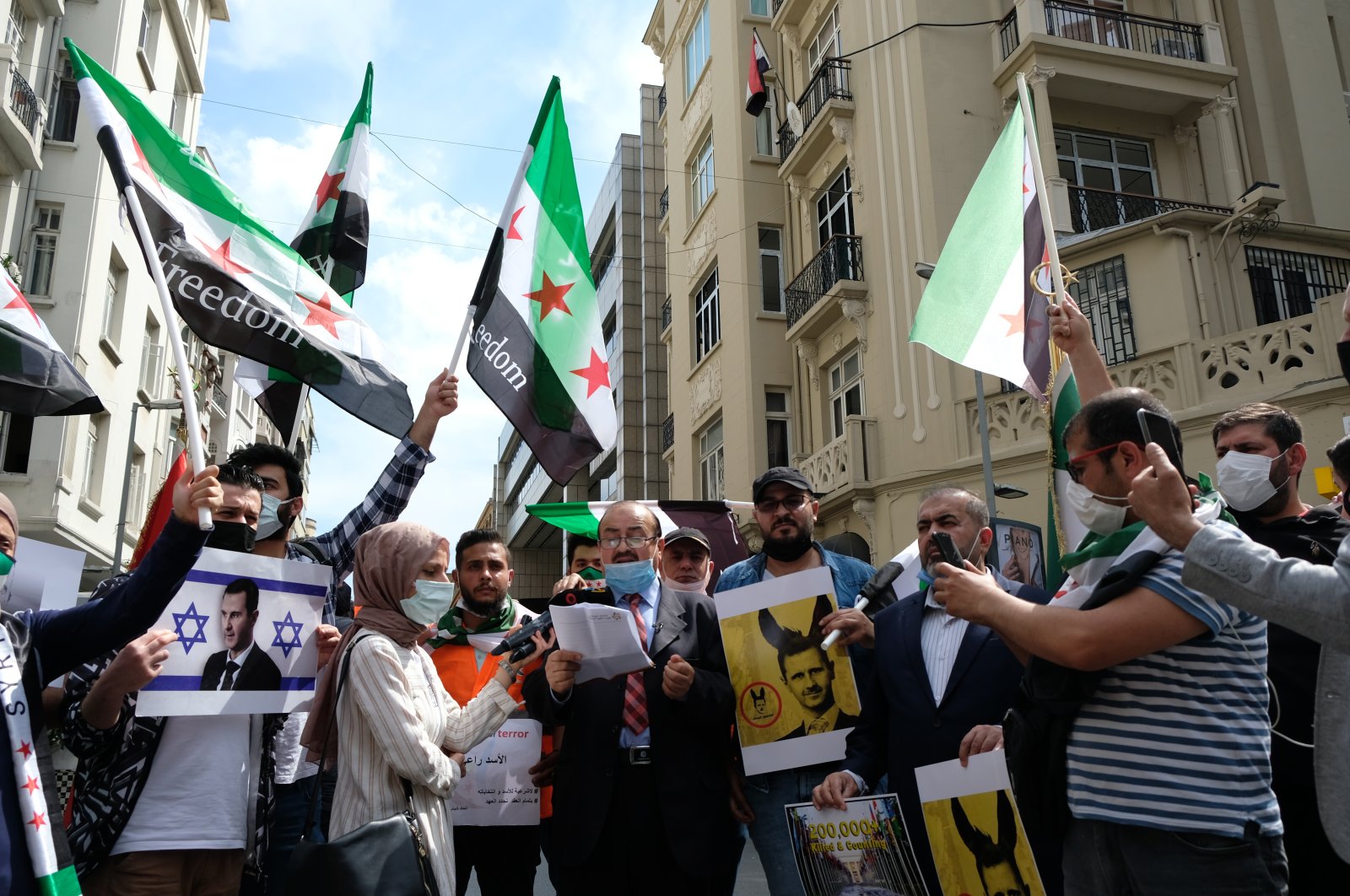 A group of people protests the upcoming presidential elections under Syria's Bashar Assad regime, Istanbul, Turkey, May 20, 2021. (AA Photo)
by DAILY SABAH WITH AA May 21, 2021 11:26 am
RECOMMENDED

The upcoming presidential elections under Syria's Bashar Assad regime was protested in Istanbul on Thursday.

Nearly 30 people gathered in front of the Syrian Consulate General in Harbiye district. They tore brochures with images of Assad and carried flags representing the Syrian revolution.

The decision to hold elections was made despite the ongoing military conflict, lack of a political solution in sight, failure of negotiations between the opposition and the regime, and the displacement of more than 10 million Syrians either as refugees or internally displaced persons. Moreover, about 40% of the country is not under regime control.

Sallah Fadil, the founder of the Syrian House Association, said on behalf of the group that the elections are invalid, according to an international agreement.

"We do not accept these elections and we condemn them," he said.

On April 18, Syria's parliament set May 26 for presidential elections, which is expected to keep Assad in power in the country devastated by a decade of civil war. The 55-year-old is widely expected to secure a fourth term in office by a comfortable margin in the May 26 vote, which observers have already said would be far from free and fair.

Assad has succeeded in every election since he assumed power in 2000 as heir to his father, Hafez Assad, by rates exceeding 88%, according to official election results. The previous presidential election was held in 2014 and saw two candidates run against Assad after a constitutional amendment allowing for a multi-candidate ballot.

Since then, regime forces have clawed back swathes of territory from the opposition and terrorist elements with military help from regime allies Russia and Iran. But large parts of Syria still escape regime control and polling will not take place in those areas. They include the northwestern province of Idlib, the last opposition bastion. The Idlib region, including nearby districts where other opposition groups are also present, is home to 2.9 million people, of whom two-thirds have fled their homes in other regions ravaged by violence.

Forcibly displaced Syrians who took refuge in northwestern Syria's Idlib denounced the Assad regime's upcoming presidential elections as "illegitimate," underlining that it is unacceptable for someone who kills his own people and has displaced millions to hold polls in the country. The Syrian opposition has also stated that it rejects the upcoming presidential elections in the war-torn country and called on Syrians living under regime-controlled areas to boycott the polls. Hadi Al-Bahra, the co-chair of the Syrian Constitutional Committee, said in January that the Syrian opposition will not recognize any presidential elections organized by the Assad regime.