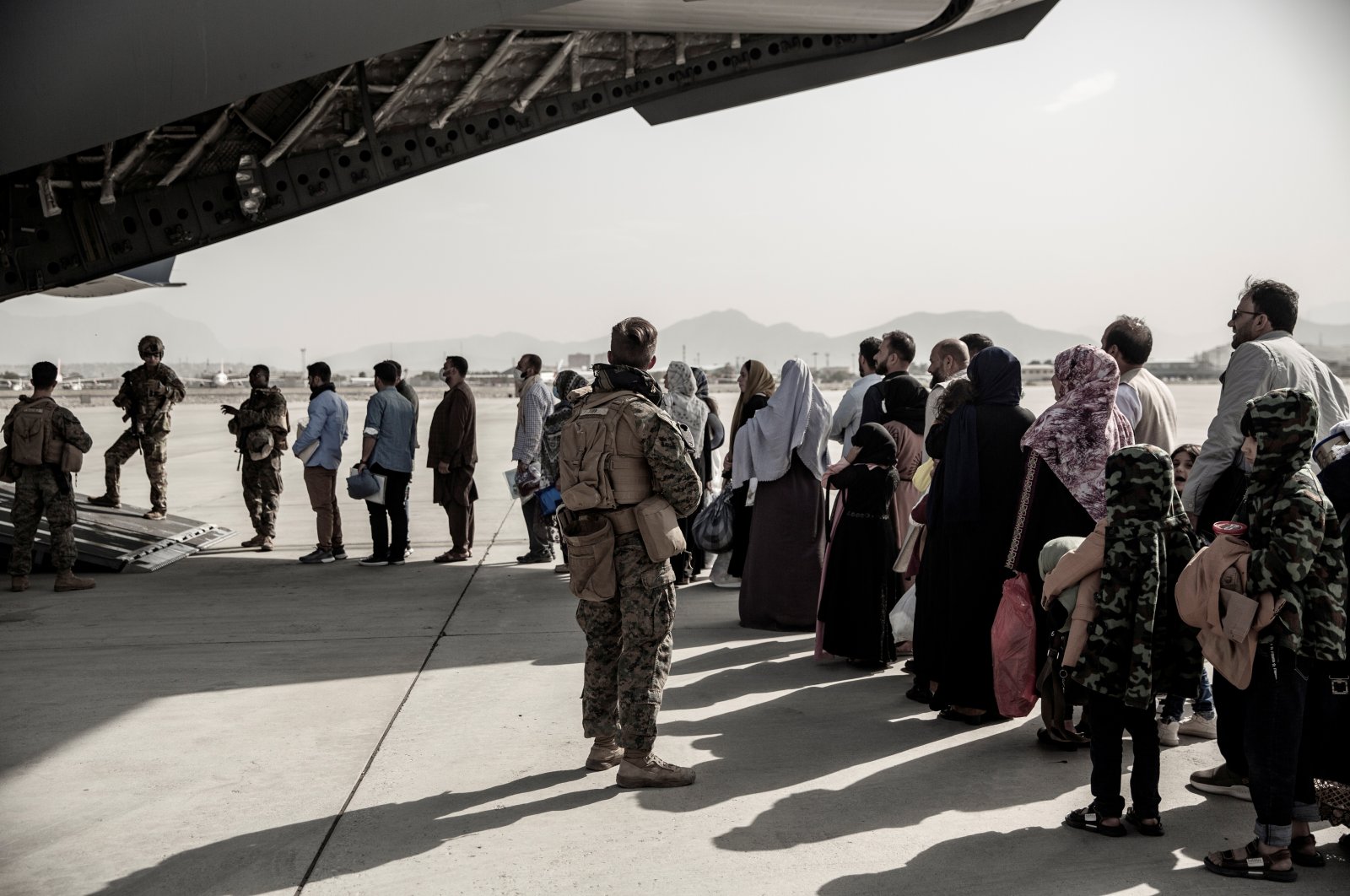 Evacuees wait to board a Boeing C-17 Globemaster III during an evacuation at Hamid Karzai International Airport in Kabul, Afghanistan August 30, 2021. (REUTERS Photo)
by Orhan Sali
Sep 01, 2021 10:46 am

Afghanistan does not have the necessary means to ensure the security of Kabul Hamid Karzai International Airport and requires the support of a foreign country in this regard, Afghanistan's former Prime Minister Gulbuddin Hekmatyar said Tuesday, underlining that Turkey is the best and most reliable candidate for the mission, considering the deep relations between the two countries.

In an exclusive interview in Kabul, the veteran Afghan leader said that he and his party, the Hezb-e-Islami party, discussed the security and management of the Kabul airport with the Taliban.

"The airport needs to be secure so that ambassadors from abroad can come and work comfortably. Afghanistan does not have the capacity to provide that security. Therefore, we need the support of a foreign country. The best and most reliable country in this regard is Turkey. We also conveyed this to the Taliban. Relations between Turkey and Afghanistan go back centuries," he said.

Turkey's Defense Minister Hulusi Akar reiterated Monday that Turkey may consider operating Afghanistan's Kabul airport if the conditions are suitable and it is requested to do so.

Turkey had been negotiating with both the Taliban and Washington about playing a role in protecting the airport after the United States troop withdrawal, which was recently completed. But the Taliban’s swift capture of the Afghan capital changed Ankara’s plans.

Turkish officials said that the Taliban have asked Turkey for technical help to run the Kabul airport after the departure of foreign forces but had insisted that Ankara’s military also fully withdraw by the end of the August deadline.

Within this scope, Turkey Friday completed the evacuation of all Turkish personnel and all Turkish citizens who wished to leave Afghanistan, in less than 48 hours. The evacuation was completed days before the Taliban’s Aug. 31 deadline for foreign forces to leave the country.

Turkey has praised what it described as moderate statements by the Taliban since they captured Kabul on Aug. 15 and has said it is open to engaging with them once a new, inclusive government is formed.

Since 2002, the Turkish Armed Forces (TSK) have operated in Afghanistan under the United Nations, NATO and bilateral agreements to contribute to the peace, welfare and stability of the Afghan people. Turkey had more than 500 noncombatant troops stationed in Afghanistan as part of NATO’s now-abandoned mission in the war-torn country. Also, it has been operating the airport for six years.

Hekmatyar described the day the last U.S. troops left the country after the two-decade invasion as very important for Afghanistan.

"First of all, Afghanistan is in a very important position due to its strategic location. That's why British troops first, then the Soviet Union, and more recently, NATO troops tested their strength in Afghanistan and left. This does not mean that, we cannot say that there is no complete unrest in Afghanistan at the moment, because only foreign forces have withdrawn from Afghanistan. After that, there is still a lot of time to go before it becomes a truly independent and war-free Afghanistan," he said.

"NATO's war here was an extension of the Russian Soviet war here. We can also say, after NATO withdrew, there is no longer any reason to fight in Afghanistan. The ongoing war in Afghanistan was an imposed war. When they withdrew, these causes of war also disappeared. At the same time, there were those who had a special place in the old administration of which they were puppets. With the withdrawal, they took them with them. Afghanistan is now on its way to becoming a truly independent country," he added.

Touching upon dialogue with the Taliban about the establishment of a new government, Hekmatyar said that they support an inclusive new government.

Hekmatyar founded the Hezb-e-Islami party in 1977 and stood out as one of the figures that resisted the Soviet Union's invasion of Afghanistan.

He carried out resistance activities against the U.S. military, which occupied Afghanistan after the 9/11 terrorist attacks in the U.S., and was among those sought by the U.S. government.

The leader returned to Kabul in May 2017 with a law enacted by the administration for internal reconciliation in Afghanistan. He was removed from the U.N. sanctions list in February that year.