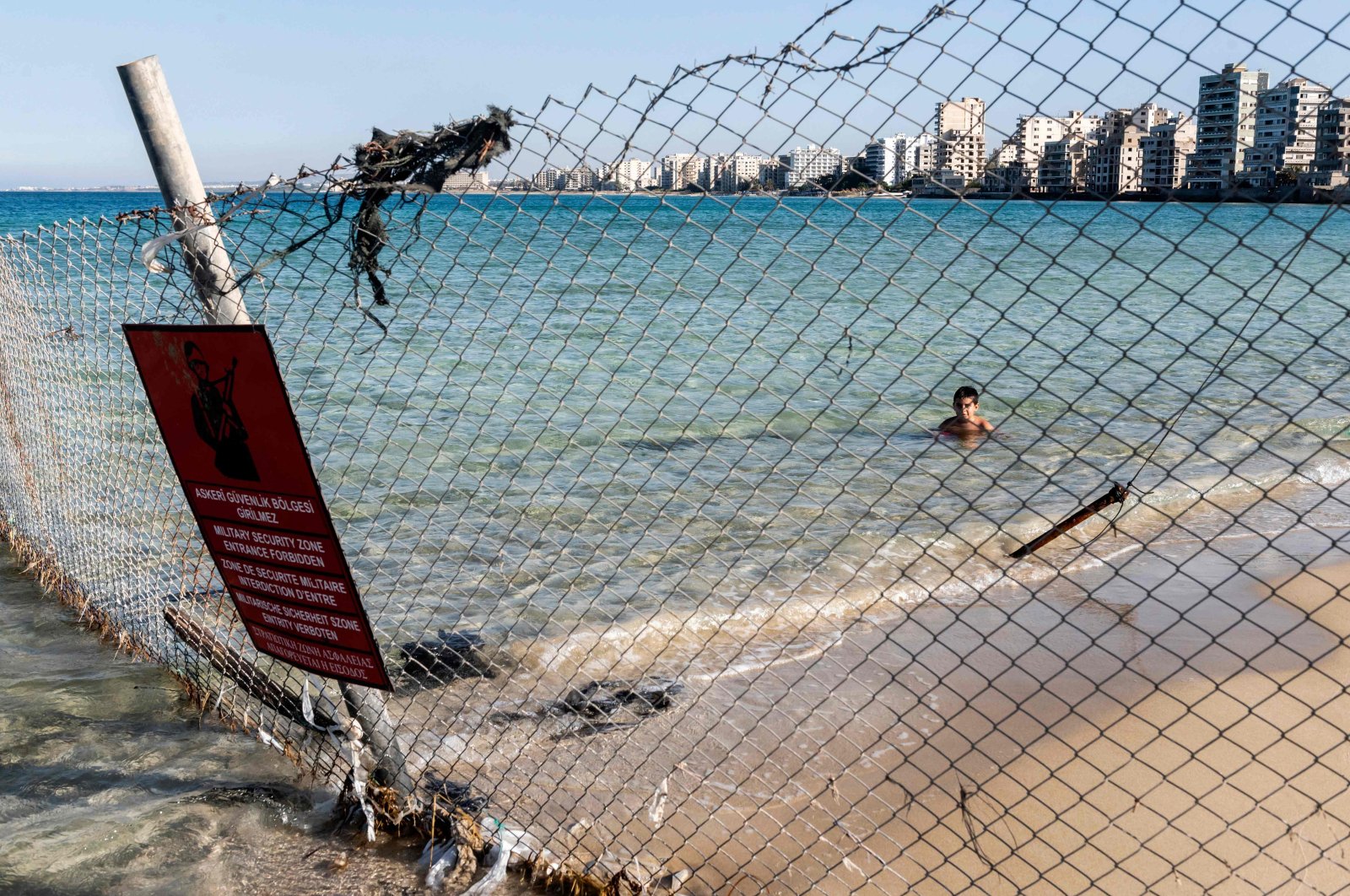 A child swims behind a Turkish army sign in the fenced-off area of Varosha (Maraş) in Famagusta town, Turkish Republic of Northern Cyprus (TRNC), June 19, 2021. (AFP Photo)
by DAILY SABAH WITH AGENCIES Jul 25, 2021 11:21 am
RECOMMENDED

The United Nations Security Council (UNSC) statement on the reopening of the town of Varosha (Maraş) in Turkish Cyprus is an unprincipled statement meant to save the day in the face of pressures from the Greek Cypriots and Greece, the Turkish Republic of Northern Cyprus (TRNC) said Saturday.

"We consider the statement made by the U.N. Security Council Presidency on July 23, 2021, to be an unprincipled statement meant to salvage the day in the face of the pressures from the Greek Cypriot side and Greece," said a statement from the TRNC Presidency.

"With the opening of closed Maraş, the Turkish Cypriot side fulfills exactly the purpose stipulated by the U.N. Security Council resolutions and the 2020 UNSC Term Presidency statement," it added, referring to Resolutions 550 and 789.

It was abandoned after the UNSC passed Resolution 550 May 11, 1984, which said the town can only be resettled by its original inhabitants.

Located in Northern Cyprus, entry into the town was forbidden except for Turkish army personnel stationed in the TRNC.

The statement went on to say that since the Turkish Cypriot side will open Varosha exclusively to its former residents in accordance with international law, its transfer to U.N. administration, envisaged under U.N. resolutions, was now irrelevant. The UNSC's statement "ignores previous decisions" it said, condemning it as an attempt to obstruct the return of rights to their claimants in the Varosha region.

Speaking earlier in the day, Turkish Cypriot President Ersin Tatar said Varosha "had to be opened to humanity" after remaining closed for 47 years.

In an address at a commemoration ceremony, Tatar said there had been expectations for years that a potential agreement on Cyprus would entail the return of Varosha, but that there had been no agreement due to the fact that the Greek Cypriot side could not demonstrate its goodwill.

It is necessary to question the UNSC's decision made upon the urging of the Greek Cypriot administration and Greece, said Tatar and added, "The essential thing is to prevent unjust treatment."

Also, Turkey's Foreign Ministry Friday rejected the UNSC's statement as well as the "unfounded claims" of several countries on the reopening of Varosha in Turkish Cyprus.

"We reject the Presidential Statement made by the U.N. Security Council on the second phase of the Maraş initiative, announced by the president of the Turkish Republic of Northern Cyprus (TRNC), H.E. Mr. Ersin Tatar, on 20 July 2021, as well as the statements from various countries which are based on unfounded claims and inconsistent with the realities on the island," the ministry said in a statement.

"These statements are based on Greek-Greek Cypriot black propaganda and groundless claims, such as that Maraş is not TRNC territory, that the TRNC will confiscate the properties in Maraş and bring settlers there against the property rights," it added.

For its part, the TRNC Foreign Ministry also slammed the UNSC statement, saying the decision to use the public areas and removing the military status of a certain part of the fenced-off area of Varosha is "in line with international law and also aims to protect the rights of the property owners."

"The wording of the statement of the UNSC Presidency on the 'reopening of the part of the fenced-off area of Varosha' is misleading," it said, and added, "The TRNC Council of Ministers has not made a decision for the reopening of the said area removed from military status."

"It is regrettable for the UNSC to make a statement based on the groundless claims by the Greek Cypriot side concerning the 'resettlement' of the fenced-off areas of Maraş/Varosha," it also noted.

Partially opened Oct. 8, 2020, after remaining a "ghost town" for decades in the wake of Turkey's 1974 Peace Operation on the island in response to a coup aimed at Cyprus's annexation by Greece, Varosha has attracted both people living in the TRNC as well as foreign tourists, with the environment and landscape around the town also boosting its appeal.

The island of Cyprus has been divided since 1974 when a Greek Cypriot coup aimed at Greece's annexation of the island was followed by violence against the island's Cypriot Turks and Ankara's intervention as a guarantor power.

It has seen an on-and-off peace process in recent years, including a failed 2017 initiative in Switzerland under the auspices of guarantor countries Turkey, Greece and the United Kingdom. The TRNC was founded in 1983.

The UNSC condemned the decision by Turkey and Turkish Cyprus to reopen a residential section of the abandoned suburb Friday and called for its “immediate reversal," warning that it could raise tensions on the divided Mediterranean island.

The statement’s adoption followed a closed-door briefing to the council Wednesday by the outgoing U.N. special representative that focused on Tatar’s announcement Tuesday that a 3.5 square-kilometer (1.35 square-mile) section of Varosha would revert from military to civilian control. He made it ahead of a military parade attended by Turkish President Recep Tayyip Erdoğan to commemorate the 47th anniversary of the Turkish operation of Cyprus.

The Security Council presidential statement says “no actions should be carried out in relation to Varosha that are not in accordance with its resolutions.”

Numerous rounds of U.N. mediated talks aimed at reuniting Cyprus have ended in failure, with the last push for a peace deal in July 2017 ending in acrimony. U.N. Secretary-General Antonio Guterres held informal talks with Greek and Turkish Cypriot leaders in Geneva in April that failed to make headway on the island’s future but the U.N. chief said talks will continue and “I do not give up.”

Both Erdoğan and Tatar have said a permanent peace in Cyprus can only come through the international community’s recognition of two separate states, upending decades of negotiations to reach a federation-based reunification accord.

The Turkish Foreign Ministry also said decades of efforts failed to lead to a bizonal, bicommunal federal settlement "due to the intransigent attitude of the Greek Cypriot administration." They added that insisting on this model "now damages the credibility of the Council."

"A new negotiation process toward a just, lasting and sustainable settlement to the Cyprus issue could begin only by securing the equal sovereignty and equal international status of the Turkish Cypriot people," the ministry said.