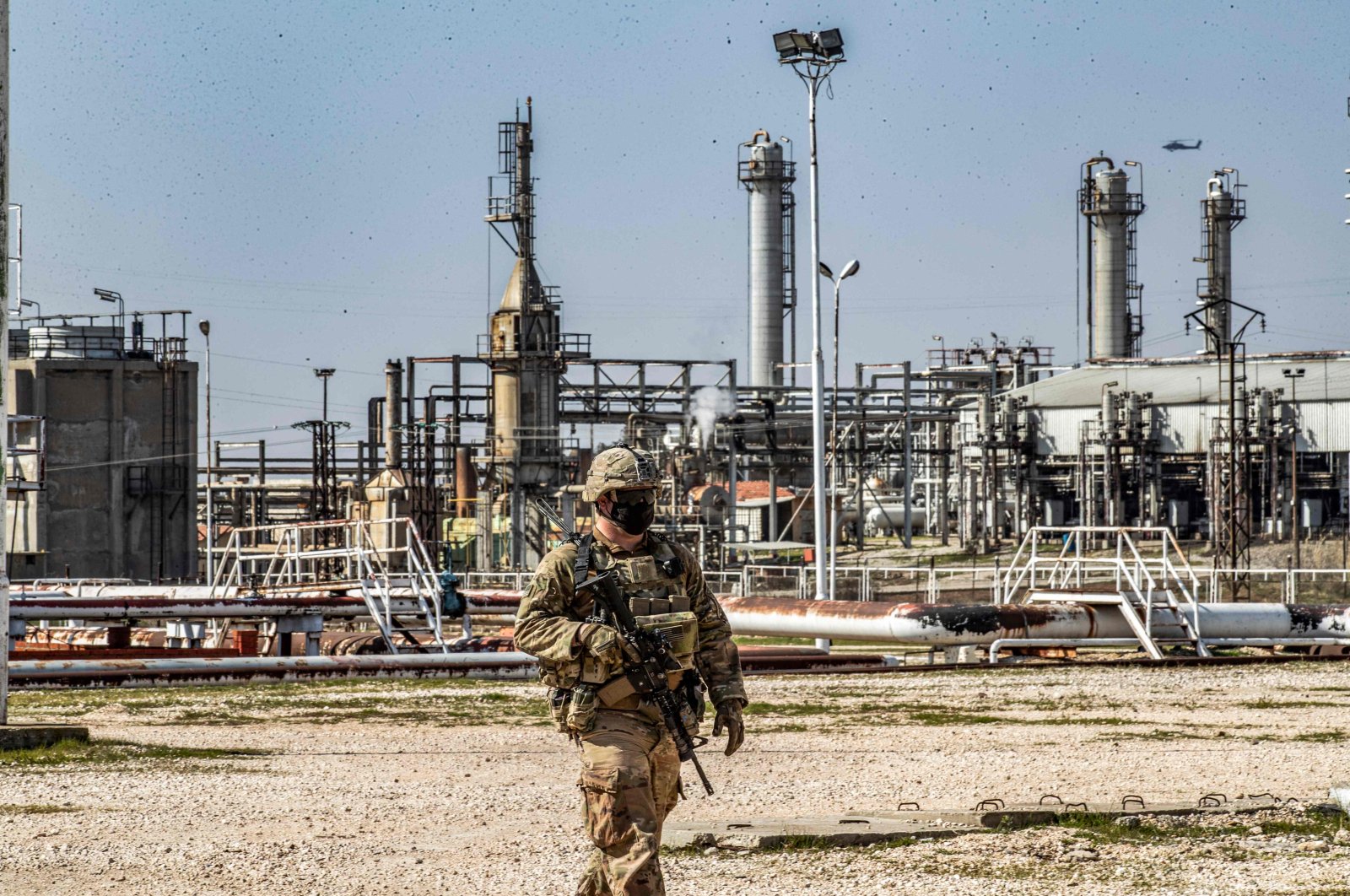 A U.S. soldier looks on while an AH-64 Apache assault helicopter flies above during a patrol by the Suwaydiyah oil fields in Hassakeh province, northeastern Syria, Feb. 13, 2021. (AFP Photo)
by DAILY SABAH Feb 17, 2021 2:38 pm

Coinciding with a new U.S. administration taking office in Washington, attacks of the YPG terrorist organization in northern Syria have visibly increased, further undermining the country's chances for peace and the Syrian people's hopes for stability

The Syrian wing of the PKK terrorist organization, the YPG, has increased its attacks on civilian settlements following the inauguration of U.S. President Joe Biden, threatening war-torn Syria’s road to peace and stability.

The districts of northern Syria that are under Turkish control are regularly targeted by the YPG, which seized control of large swathes of land in the northern parts of the country with the Bashar Assad regime's blessing when clashes intensified in 2012.

Most recently, one civilian was killed and three more injured in a bombing in northwestern Syria’s al-Bab on Tuesday, while car bombings killed at least 20 people earlier this month in separate terrorist attacks that took place in Syria’s northern Azaz, al-Bab and Afrin provinces.

The almost decadelong Syrian conflict has evolved into a complex issue involving several terrorist groups and foreign powers. With a new U.S. administration whose Syria policy remains unclear, the YPG has been revising its position.

Biden had harshly criticized former U.S. President Donald Trump’s decision to withdraw U.S. military forces from Syria and deemed it a “betrayal” of the YPG, signaling that the new administration will continue its policy of backing the terrorist organization that is disrupting and endangering the lives of thousands of civilians.

Biden’s decision to bring back Brett McGurk, the former U.S. envoy to the coalition fighting Daesh and the architect of the U.S.' cooperation with the YPG, indicates a similar policy path.

The U.S. primarily partnered with the YPG in northeastern Syria in its fight against the Daesh terrorist group. Turkey, on the other hand, strongly opposes the YPG's presence in northern Syria. Ankara has long objected to the U.S.' support for the YPG, a group that poses a threat to Turkey and terrorizes local people, destroying their homes and forcing them to flee.

Stepping up its attacks, the YPG has turned civilian settlements in the Operation Euphrates Shield area into centers of terror by attacking the region from Manbij, where it has nested since 2016.

The terrorist organization has recently increased its attacks on the northern Jarablus and al-Bab regions, even targeting graves with rockets and mortars in the region’s villages.

The terrorists aim to displace the civilians living in the region and prevent them from leading a safe life, using Manbij as a launchpad for their attacks.

Speaking to Anadolu Agency (AA), Abu Usama, who operates a chicken farm, stated that the YPG attacked their village even though there was no military point or base and only locals conduct farming activities.

“The YPG is only targeting civilians. There is no one other than civilians in our village,” Abu Usama stated.

Another resident, Adnan Ahmed, said, “They are not only attacking us but also our dead” pointing to the organization’s attacks on graves. “Graves, schools and civilian settlements are bombed in the attacks.”

Turkey, Russia and Iran on Tuesday similarly touched upon the rise of terror attacks in northern Syria following two days of talks between the countries’ representatives in the Russian resort city of Sochi.

The Astana trio rejected separatist agendas that pose a threat to the political unity and territorial integrity of Syria and the national security of neighboring countries while reaffirming their determination to support the stalled works of the Syrian constitutional committee.

The Turkish Foreign Ministry in a written statement said that the three countries underlined the necessity to combat terrorism during the meeting.

“Increasing terrorist acts in Syria which resulted in loss of innocent lives were condemned and the concern on rising attacks against civilians in the northeast of Syria was expressed,” the statement highlighted.

At the 15th round of the Astana talks, the three countries discussed the current situation in the political process as well as the developments in northwestern Idlib province and east of the Euphrates.

Turkey and Russia, which back opposing sides in Syria's war, agreed to halt military activities in Idlib in March last year after an escalation of violence displaced nearly a million people and brought the two sides close to a confrontation in December 2019. Yet despite the cease-fire, attacks have continued from time to time in the last opposition bastion.

The Astana trio emphasized the cessation of cease-fire violations and attacks targeting civilians.

Turkey, Russia and Iran are the guarantors of the Astana peace process, launched in Kazakhstan in January 2017 to end the Syrian war. The Astana meeting was initiated by the trio to bring the warring sides in Syria together to find a permanent solution to the decade-long war. The main agenda items have been the constitutional system, the political transition, security and resettlement.

The presidents of the three countries last discussed the situation in Syria at a video summit in June.

One of the main focal points of the trilateral meeting was the last round of constitutional committee talks between the Syrian regime and the opposition, held from Jan. 25-29 in Geneva, which U.N. special envoy Geir Pedersen called “disappointing.”

Turkey, Russia and Iran voiced their support for the constitutional process through “continuous interaction with the Syrian parties, committee delegates and the UN Secretary-General’s Special Envoy for Syria in order to ensure its sustainable and effective functioning.”

“Within this framework, we strongly expressed the necessity for a structured work plan and methodology for an efficient functioning of the Committee,” the ministry statement read.

The constitutional committee, made up of representatives of the Assad regime, the opposition and civil society, aims to pave a way for a political solution to the conflict, but so far, little progress has been made.

Talks on a new constitution for Syria hit a brick wall in January, with the U.N. mediator concluding, "We can't continue like this," and the opposition saying that the political process aimed at solving the decadelong war in Syria is just a tool to waste time for the Assad regime until it can impose itself on the international stage again.

The working group on the Release of Detainees/Abductees, Handover of Bodies and Identification of Missing Persons also convened in the margins of the meeting, discussing future activities to develop cooperation regarding the mutual and simultaneous release of persons detained by opposition groups and the regime.

More than 12 million people have been displaced due to Syria's devastating civil war and many more have been forcibly disappeared. Hundreds of thousands have died as Syrian dictator Assad remains in power.

After years of war, Syria is in the throes of a deep economic crisis amid a collapsing currency and skyrocketing inflation. However, fighting has largely ceased and Assad has taken back control of a large part of the country thanks to strong Russian and Iranian military backing, while the other parts of the country have fallen into the hands of terrorist groups, especially in the northeast.