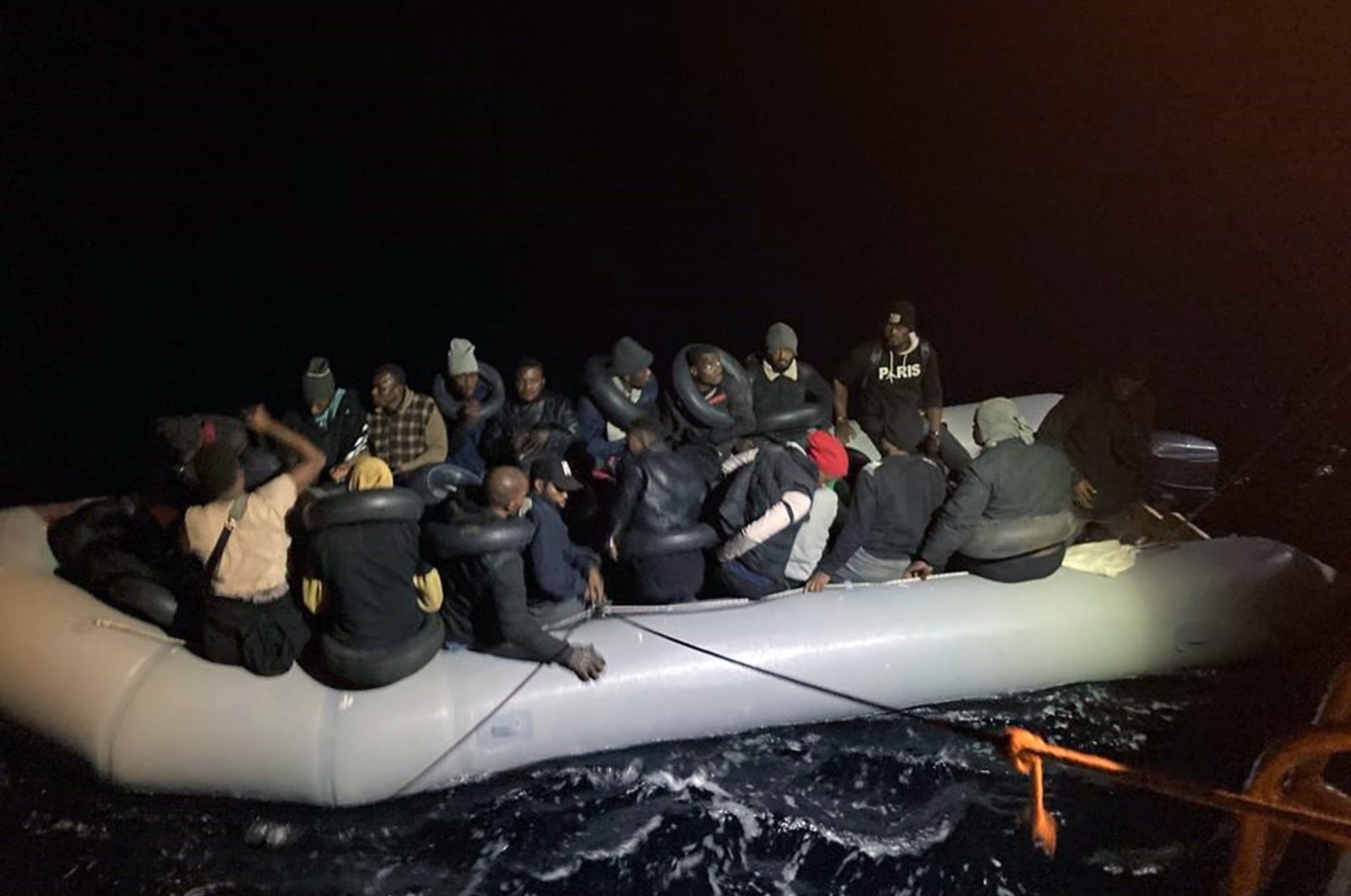 A group of irregular migrants on a rubber boat is rescued off the coast of Fethiye in the Aegean province of Muğla, southwestern Turkey, Oct. 15, 2021. (İHA Photo)
by DAILY SABAH Oct 15, 2021 10:33 am
RECOMMENDED

Turkish security forces on Thursday rescued and held at least 212 irregular migrants from across the country, the authorities confirmed.

Ten Syrian nationals, including one child, were held in the northwestern Kırklareli province after illegally entering Turkey. They were held by the gendarmerie forces near the border with Bulgaria.

The irregular migrants claimed they were beaten in Bulgaria and referred to Turkey.

Meanwhile, Turkish coast guard units rescued 67 irregular migrants off the coasts of Dikili, Ceşme and Menderes districts in the western province of Izmir after they were pushed back into Turkey's territorial waters by the Greek authorities.

Security forces acting on a tip-off held another 36 irregular migrants on a rubber boat off the coast of Fethiye in the Aegean province of Muğla. The group, trying to cross into Europe, was also pushed back into Turkish territorial waters by Greek officials.

Separately, 36 more migrants traveling on two rubber boats were taken ashore in the coastal town of Bodrum. While the migrants in one boat were pushed back by Greek forces, the other boat was adrift due to an engine failure.

Another group of 38 migrants pushed back into Turkey's territorial waters was rescued by the coast guard off Kuşladası in the southwestern Aydın province, while another 25 irregular migrants were rescued off the coast of Didim.

After routine checks, the asylum seekers were sent to provincial migration authorities.

The investigation unearthed evidence that Greek, Croatian and Romanian authorities have been violently pushing back asylum seekers crossing the bloc's external borders.

There is "mounting evidence" of pushbacks of asylum-seekers from Greece to Turkey recently, a United Nations human rights office spokesperson also said Tuesday.

To a question by Anadolu Agency (AA) about the pushbacks, Hurtado said her office is currently talking with the EU.

"For a few months, we've been trying to confirm and see what the EU should do to stop the undertaking of these pushbacks on the external borders," Hurtado said.

Turkey and Greece have been key transit points for migrants, fleeing war and persecution, looking to cross into Europe to start new lives. Turkey has accused Greece of large-scale pushbacks and summary deportations without migrants being given access to asylum procedures, which is a violation of international law. It also accuses the EU of turning a blind eye to this blatant abuse of human rights.

Pushbacks are considered contrary to international refugee protection agreements, which dictate that people should not be expelled or returned to a country where their life and safety might be in danger due to their race, religion, nationality, or membership in a social or political group.

In a new report, the EU Agency for Fundamental Rights (FRA) revealed recently that migrants at EU borders still face difficult conditions and violations of rights in detention and reception centers.