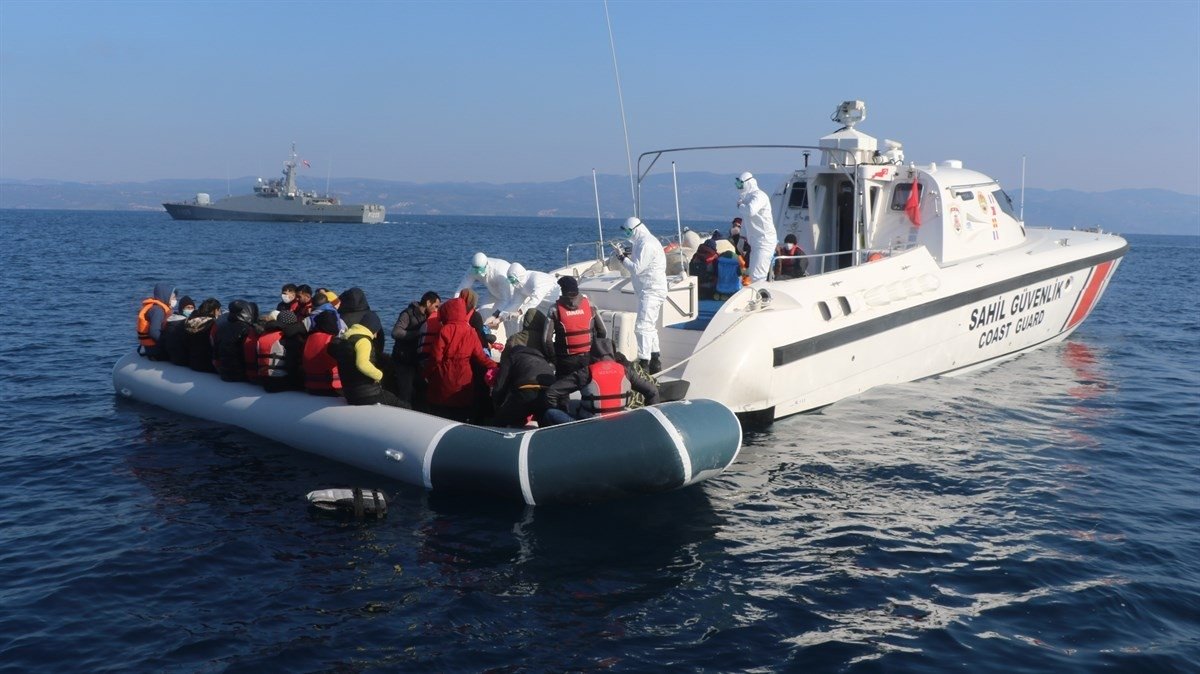 Irregular migrants pushed back by Greece are rescued by the Turkish coast guard in the Aegean Sea near Turkey's western province of Balıkesir, April 3, 2021. (İHA Photo)
by DAILY SABAH Apr 07, 2021 10:34 am
RECOMMENDED

German media documented Greece's practice of illegal migrant pushback toward Turkish territorial waters in the Aegean Sea, during a patrol with the Turkish coast guard.

After they were pushed back by Frontex and the Greek boats, Turkish boats rescued the asylum-seekers.

Speaking to the ZDF, a Palestinian migrant rescued by Turkey during the incident underlined the inhumane treatment of Greek security forces and said: "They hit us with fists and sticks. They wanted to sink us. They shouted, 'Go back to Turkey.'"

Another migrant woman also told that she managed to cross onto a Greek island a few days ago. She added that Greek security forces captured her and her children on the island and put them on a rubber boat in the sea to push them back toward Turkey.

The German reporters informed that the European Union has been planning to increase the budget of Frontex in order to strengthen the protection of its borders.

When contacted by ZDF, Frontex said it's under the command of the Greek authorities while the Greek officials claimed the pushing back of asylum-seekers is compatible with international law.

Turkey's Communications Director Fahrettin Altun shared ZDF's footage on his Twitter account, and called the recurring incidents in the Aegean a "tragedy" and pointed to the responsibility of Greece.

Frontex head Fabrice Leggeri has been under pressure for months over the allegations as Frontex takes on a greater frontline role in patrolling EU borders. EU lawmakers and activists have called for him to resign over the operations, but he has refused, insisting the agency is key to the fight against human trafficking. A working group of 14 members of the European Parliament was formed to investigate the EU border agency's involvement in pushbacks of asylum-seekers in Aegean waters.

Whether the Frontex is willing to hold itself liable for the numerous pushbacks and violations against migrants and asylum-seekers at Greece's border with Turkey has come into question, Human Rights Watch (HRW) said in a report last month.

In a statement issued late February, Turkey urged Athens and "all elements involved in pushbacks" to end their violations of international law, human rights agreements and a migration deal between the EU and Turkey. Interior Minister Süleyman Soylu also last week called on Europe to act against Frontex.