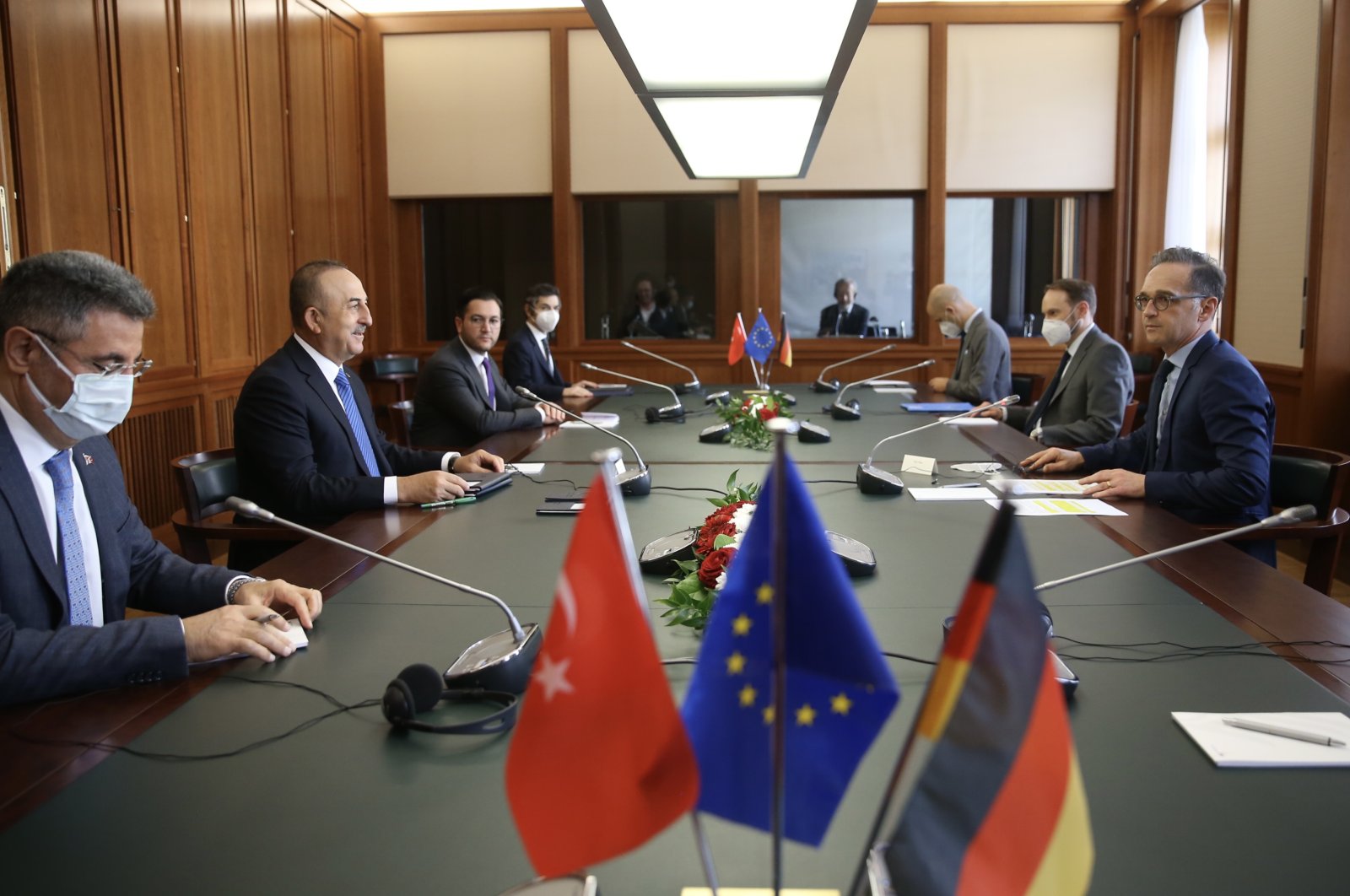 Speaking at a joint news conference with his German counterpart Heiko Maas in Berlin, Çavuşoğlu said Turkey expects constructive steps from the bloc, including visa liberalization.

"There has been a positive atmosphere with the EU and Germany has contributed to this, but it is about time to take concrete steps now," Çavuşoğlu told reporters, adding that the 2016 deal also needs to be implemented.

Maas, for his part, said that Germany supports a constructive Turkey-EU dialogue.

"Turkey is an important NATO ally and Germany has always emphasized this. It will continue to be so in the future," Maas said.

He continued by saying that Germany supports the Turkey-EU dialogue.

"We know ... that we are interested in these talks, and of course in goals and results. Last year, was a difficult year in the relationship between the EU and Turkey. This year looks to be a much better one."

Turkish and European officials have over the last couple of years carried out talks on revising the current customs deal. Although the talks stalled as a result of political tensions, business circles and officials on both sides have endeavored to maintain dialogue.

The visa liberalization was designed so that Turkish citizens with biometric passports would be able to spend 90 days within 180 days in the Schengen area without a visa. With this initiative, Turkey-EU ties, which were struggling, entered a new era through the migration crisis.

Turkey-EU relations are marked by disputes on several issues, including the Eastern Mediterranean tensions, Turkey's role in Syria, the migrant crisis and the stalemate in Turkey's accession process to the bloc.

In response to a question about the so-called "Sofa Gate" scandal, Çavuşoğlu said Turkey strictly followed protocol and was not responsible for the crisis.

"We are saddened to see intra-EU tensions exposed during the meeting with our president; the reason for 'Sofa Gate' was the competition between EU’s branches of council and commission," Çavuşoğlu said.

Italian Prime Minister Mario Draghi even called Erdoğan a dictator in the aftermath of the incident, sparking a furious response from Turkey.

The diplomatic faux pas was instantly branded "Sofa Gate" on Twitter and became the dominant talking point of the first Turkey-EU summit in a year.

Çavuşoğlu also said Turkey and Germany have reached a consensus on the withdrawal of mercenaries from Libya, but Ankara has a bilateral agreement with the Libyan government for its troops to be stationed there.

He said Turkish troops in Libya are there under agreement with Libya's previous Government of National Accord (GNA) and should not be confused with the foreign mercenaries stationed there.

"There are many foreign fighters and mercenaries present in Libya. We agree that they need to withdraw," Çavuşoğlu said and added that but "intervention" by third parties into bilateral accords covering military training and support would be wrong.

"I think that foreign mercenaries and legitimate presence there should not be confused," he said.

He also warned that calling on Ankara to end its support for Libya's government would in fact undermine this legitimate government.

The "agreement between the two sovereign countries addresses essential needs of Libya with regards to military training and consultancy, (and) ending this support would not be in favor of Libya," said Çavuşoğlu.

Calls from third parties to end the "agreement between the two countries would not be the correct approach," he added.

Merkel told Erdoğan that the withdrawal of foreign troops from Libya would be an "important signal" as both leaders vowed to support the new interim government there.

The two leaders agreed to support the interim government in its efforts to improve the supply situation for the population and in preparing elections by year-end.

Referring to the latest developments in Libya, Erdoğan reaffirmed Turkey's support for the Government of National Unity (GNU) in Libya and willingness to cooperate with Germany in this regard.

On Feb. 5, Libya's rival political groups agreed during U.N.-mediated talks in Geneva to form an interim government to lead the country to elections this December. Libyan delegates elected Mohammad Younes Menfi to head a three-member Presidential Council and Abdul Hamid Dbeibah as the new prime minister.

Libya's new unity government was sworn in on March 15 from two warring administrations that had ruled eastern and western regions, completing a relatively smooth transition of power after a decade of violent chaos.

Turkey had backed the legitimate Tripoli-based GNA against the illegitimate eastern-based forces loyal to Khalifa Haftar, which was supported by Russia, Egypt, the United Arab Emirates (UAE) and France.