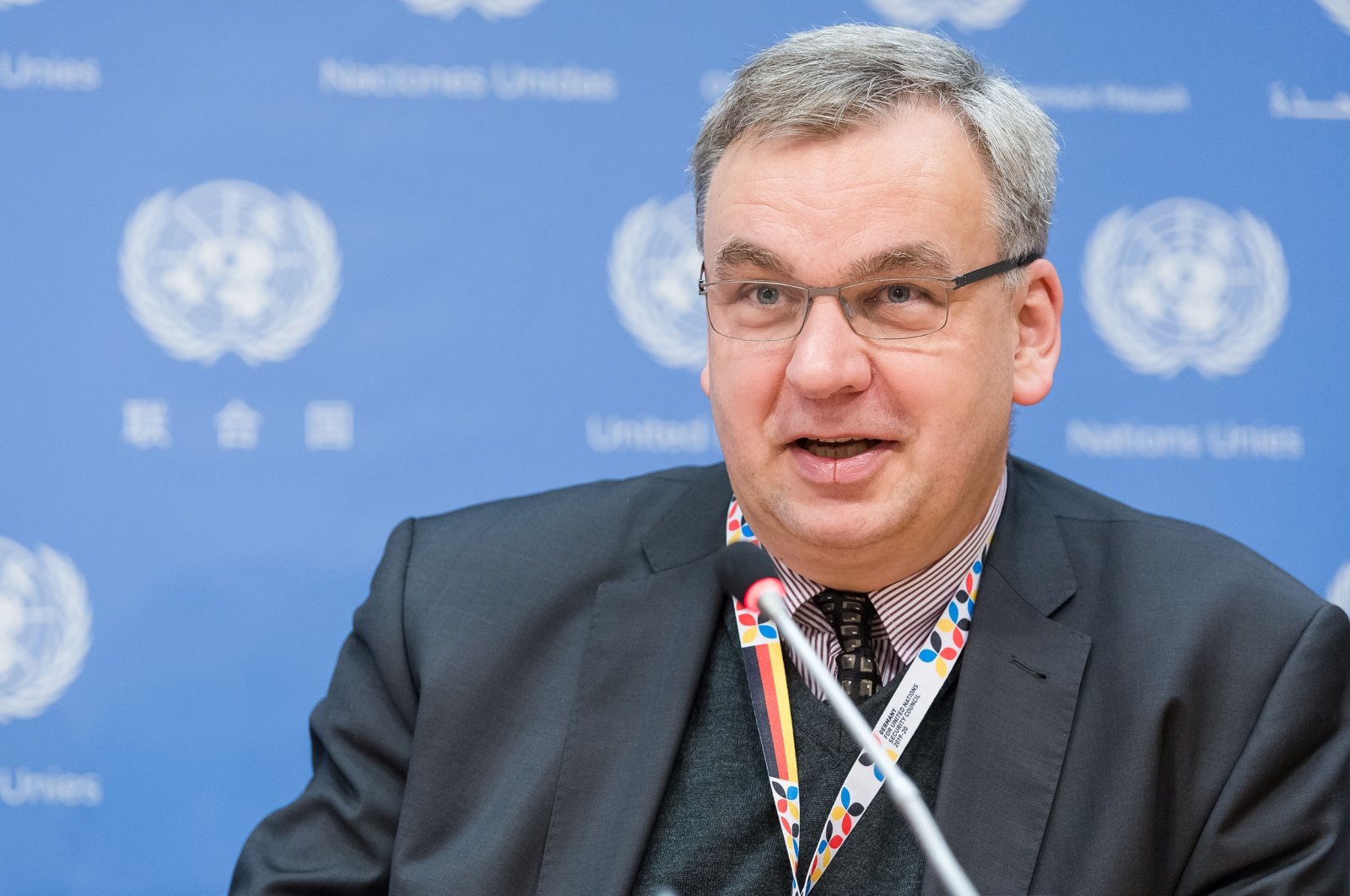 Jurgen Schulz, Germany's ambassador to Ankara, is seen at a press conference at the United Nations Headquarters in New York, March 6, 2017. (Getty Images)
by DAILY SABAH
Aug 05, 2021 11:37 am

Turkey is not just an ordinary partner of the European Union but a special country, Germany's ambassador to Turkey said Wednesday, adding that Germany aims to increase the cooperation between Ankara and Brussels.

Meeting with reporters in the capital Ankara, Jurgen Schulz noted that Turkey and Germany are extremely important partners, especially in multilateral platforms such as the United Nations and NATO. He added: "We want to see deeper strategic cooperation between the EU and Turkey. Turkey is not just a partner of the EU. It is a special country."

Emphasizing that the bilateral relations between Turkey and Germany are based on mutual trust, Schulz said that the regular exchange of views between Chancellor Angela Merkel and President Recep Tayyip Erdoğan takes the relations forward.

Remarking on the general elections to be held in Germany on Sept. 26 and Merkel's decision not to be a candidate, Schulz said, "We do not know the election result, but political ties and contacts between Turkey and Germany will continue no matter who replaces Chancellor Merkel and our cabinet."

Schulz said that the two countries managed to develop their economic and commercial relations even under the influence of COVID-19. The bilateral trade volume between Germany and Turkey was recorded as 37 billion euros ($43.8 billion) last year.

He explained that they are making efforts for the EU to achieve its goal of deeper cooperation with Turkey on the updating of the Customs Union, high-level dialogue and migration. Saying that they fully support the EU and Turkey's stances on setting a "positive agenda," Schulz believes it is natural for the EU to have basic expectations from Turkey on the Eastern Mediterranean, fundamental rights and the rule of law.

"We want to see more progress in Cyprus, which continues to be a source of concern for us. The latest developments in Varosha have worried European leaders and European countries a lot," he added, referring to the Turkish Cypriot coastal town, also known as Maraş.

After last year's tensions due to some disagreements in the Eastern Mediterranean, both the EU and Turkey have voiced their intentions to set a positive agenda, yet further efforts and actions are needed. Turkey recently reiterated that it is part of Europe and sees its future in the EU, adding that it will continue to work toward full membership. Turkish officials have also said that they hope for progress in 2021 and expect the bloc to take definitive action to this end.

Merkel in June voiced support for closer ties with Ankara by updating the European Union-Turkey Customs Union and a key refugee agreement. Despite existing disagreements, the EU and Germany should be in cooperation with Turkey, she said.

In the EU summit of this June, the European Union decided to continue working on a customs union update with Turkey, Merkel said Thursday, adding that the bloc also agreed on additional funding of 3 billion euros for migrants in Turkey.

Turkey is the only non-EU country with a customs union agreement with the bloc. The deal was struck in 1995. In its Dec. 21, 2016 assessment, the European Commission proposed revamping the deal. The current Customs Union only covers a limited range of industrial products and excludes agriculture, public procurement, e-commerce and services. Expanding the Customs Union would bring Turkey, an EU candidate for membership of the bloc, fully into the internal market of the world’s largest trading bloc, allowing almost all goods and services to flow unhindered.

Also, Turkey and the EU in March 2016 signed a refugee deal that aimed to discourage irregular migration through the Aegean Sea by taking stricter measures against human traffickers and improving the conditions of nearly 4 million Syrian refugees in Turkey. Turkey has said falling numbers of migrant crossings show it upheld its part of the deal, but the EU failed to keep its half, including visa liberalization and financial aid for refugees.

Ankara has the longest history with the union and the longest negotiation process. The country signed an association agreement with the EU's predecessor European Economic Community (EEC) in 1964, which is usually regarded as a first step to eventually become a candidate. Applying for official candidacy in 1987, Turkey had to wait until 1999 to be granted the status of a candidate country. For the start of the negotiations, however, Turkey had to wait for another six years, until 2005, a uniquely long process compared with other candidates.

Expressing his sadness for the losses caused by forest fires in Turkey, Schulz conveyed his "get well soon and condolences" to all Turkish people.

Recalling that the most severe flood disaster of the last 30 years has recently hit Germany, he said: "We lost more than 180 people due to the flood. Thousands of people lost their homes. While we are dealing with the consequences of this disaster, we understand the Turkish people who find themselves in the forest fire disaster and wish everyone to be well."