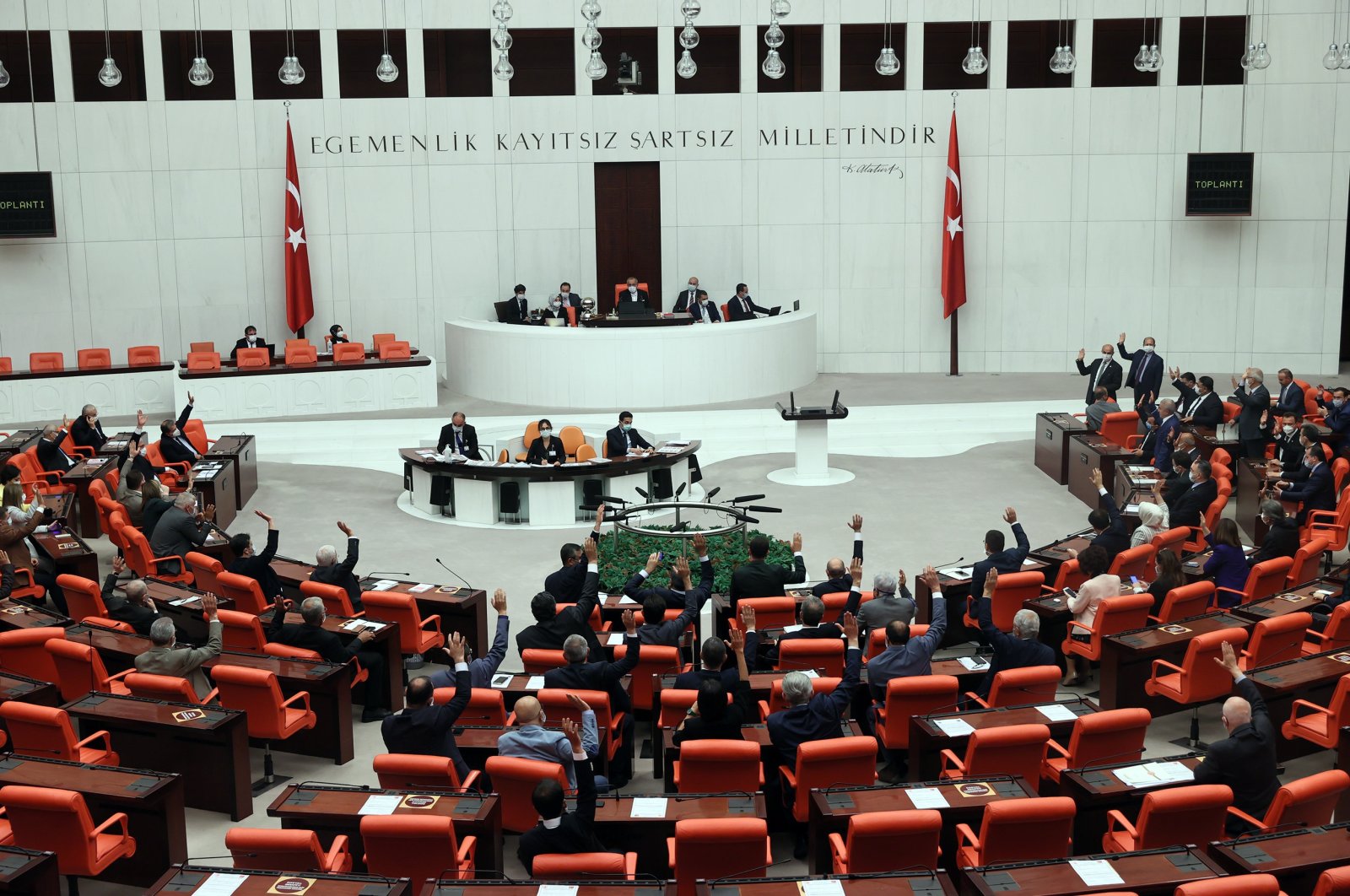 A view of the General Assembly of the Turkish Parliament is seen in this undated file photo. (Sabah File Photo)
by DAILY SABAH WITH AA
Sep 30, 2021 11:11 am

"In the new (legislative) session, we will focus on many issues, especially judicial reform, economy, and the fight against the (coronavirus) pandemic," Turan told Anadolu Agency (AA).

The Turkish Parliament will launch the fifth legislative session of its 27th term on Friday.

"We will have important agendas such as the election law, the law on political parties and the work on a new constitution," he said.

The new election law is designed to make critical changes to Turkey's election threshold, the lawmakers' ability to change parties, requirements to participate in elections and an overhaul of the overall election system, among others. Accordingly, reducing the election threshold and increasing the number of electoral areas are among the planned changes to the electoral law.

The current 10% threshold using the highest averages method – known as the D'Hondt method – was introduced with the 1982 Constitution that was adopted in a referendum after the 1980 military coup. Even though the AK Party promised several times to remove the threshold during the last decade, no steps had been taken so far on the issue.

The threshold aimed to prevent political instability as the former system of proportional representation, introduced with the 1961 Constitution, led to fragile coalition governments in the 1970s, with small or wing parties gaining Cabinet powers far beyond their votes, due to tough coalition bargaining. The new move is expected to enable smaller parties to enter elections without necessarily looking to form an alliance.

The new election system may adopt a strategy based on the single-member district, which is an electoral district represented by a single officeholder. It contrasts with a multimember district, which is represented by multiple officeholders. This system envisages the division of Turkey into exact polling districts – 600, for instance, the recent number of members of Parliament – and each district would vote for one deputy. This system is already being applied in the United Kingdom.

"It is the common responsibility of all political parties to contribute to the work that will make Turkey stronger. We want to stay away from polemics and vicious discussions," he added.

"In the new judicial year, we'll accelerate our judicial reform efforts that will relieve both our justiciary organization and our nation," Erdoğan said.

On March 2, he announced a human rights plan, unveiling 11 principles set to be carried out over the course of two years.

It was designed as a "broad-based" plan to strengthen rights protections, individual freedoms and security, judicial independence, personal privacy, transparency, and property rights, as well as protect vulnerable groups and enhance administrative and social awareness of human rights.

Meanwhile, the deputy parliamentary group chair of the Nationalist Movement Party (MHP) called for a new social media law in the new term.

"Fake news and perception operations on social media continue. It is likely that a new regulation for these will come in the new legislative year," Erkan Akçay said.

"A regulation should be made for the media that currently engage in perception operations through the spread of false news against Turkey," Akçay added.

Akçay noted that the new constitution works will also be on the agenda in the new legislative session.

The MHP introduced its own 100-article new constitution proposal in May.

The MHP cooperates with the AK Party under their People's Alliance, formed ahead of the June 2018 general elections.

In February, Erdoğan urged all political parties to participate in drafting a new constitution, with the MHP's leader voicing his agreement.

The president’s proposal came four years after the 2017 referendum asked voters to decide on an 18-article bill to switch from a parliamentary to a presidential system, among other changes. The amendments to the Constitution were jointly introduced by the AK Party and the MHP. Erdoğan was elected president under the new system in 2018.

"The primary task of the parliament in the new legislative year should be to discuss and enact a series of measures, relieving large segments of the society that have been hurt economically," Özgür Özel said.

"However, we understand from the statements of the spokespersons of the party and the developments that our citizens will not be on the agenda of the government," Özel added.