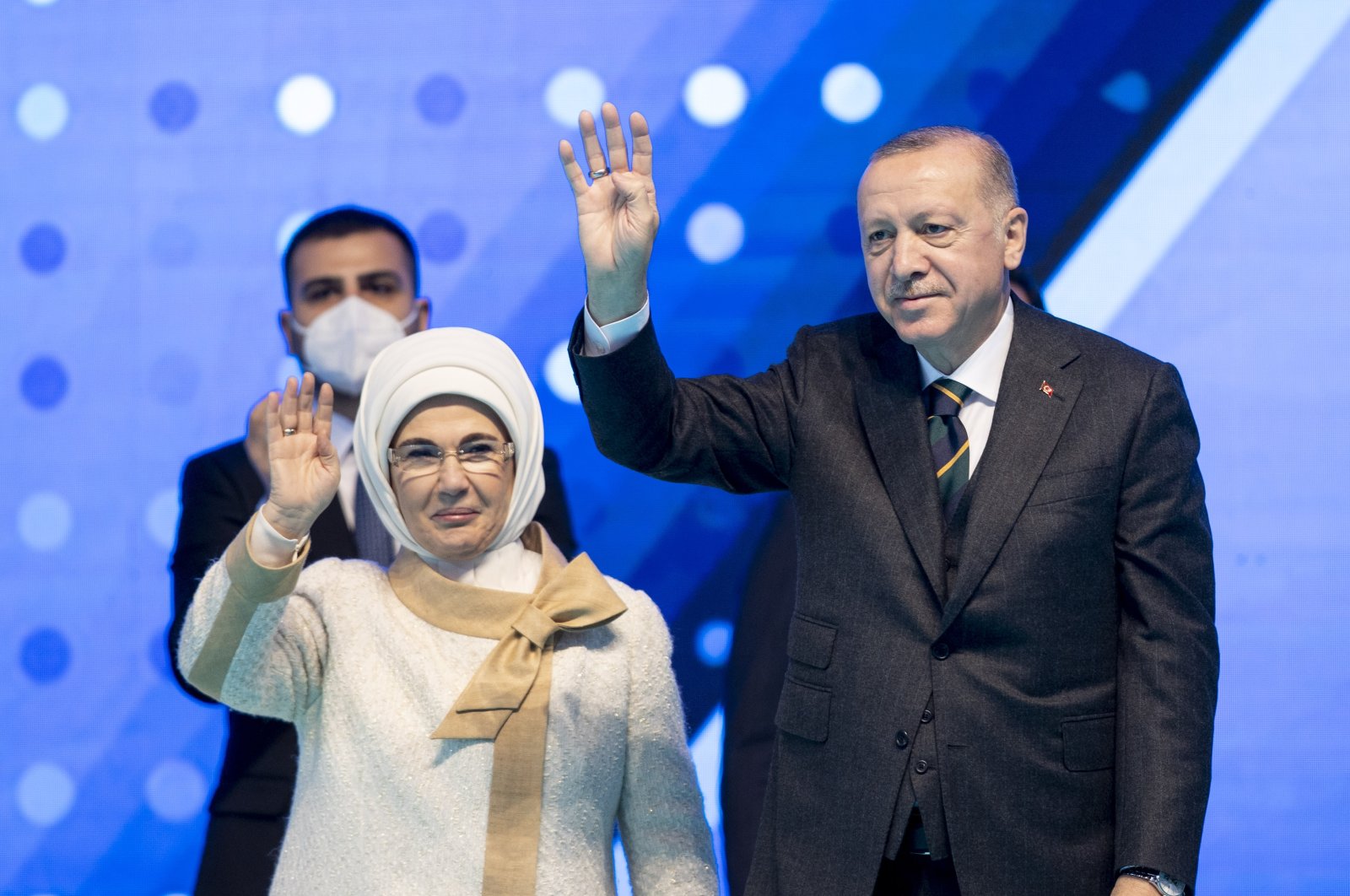 President Recep Tayyip Erdoğan at his party's seventh ordinary congress, highlighted the vast number of contributions and efforts the ruling AK Party has made to Turkey in its 19 years, ranging from education, health and foreign policy, to the security and defense sector

The ruling Justice and Development Party (AK Party) will carry Turkey toward its 2023 targets and its vision for 2053, through its recently announced judicial and economic reforms, as well as steps on human rights, President Recep Tayyip Erdoğan stated on Wednesday at the party's seventh ordinary congress in the capital Ankara.

Erdoğan underlined that the party has transformed Turkey into one of the most developed countries in the world in terms of democracy and development, highlighting the many investments the AK Party has made across an expanse of fields including health, education, infrastructure, energy and defense in all 81 provinces.

The party is undergoing a 70% restructuring and a Cabinet change is anticipated.

The president announced that the party's Central Decision-Making and Administrative Committee (MKYK) was enlarged from 50 members to 75, voted for and chosen by around 1,500 delegates.

During the congress, Erdoğan was reelected for the position of the AK Party's chairperson while former Parliament Speaker and Prime Minister Binali Yıldırım was named AK Party's deputy chairperson at the party congress, in addition to incumbent Numan Kurtulmuş.

The AK Party has now reached 13.5 million members, of which over 1 million are young people. “Let alone Turkey, there is no such other party in the world,” Erdoğan pointed out.

Eleven political parties were invited to the AK Party congress, which took place under COVID-19 measures.

Launched in late 2019 and interrupted by the COVID-19 pandemic, the provincial congresses were completed recently, leading to a major shift in the party’s local structure.

The party had held its sixth ordinary congress in August 2018.

Erdoğan recently expressed his confidence in winning the 2023 elections, calling it a year of victory for the People’s Alliance. The ruling AK Party forged an alliance with the Nationalist Movement Party (MHP) in the 2018 parliamentary and presidential elections. The alliance secured a majority in Parliament, while their presidential candidate, Erdoğan, also won the election with 52.6% of the votes.

Speaking about the efforts put forward by the party toward the country's foreign policy, Erdoğan stated: "In the field of foreign policy, we have both strengthened the tools of our country and diversified them. We have carried out opening policies toward Africa, Asia and Latin America where Turkey had only a limited presence before. Thereby, we have raised our foreign representations that were only 163 in 2002, to 251."

Turkey, as a country located at the heart of Africa, Asia and Europe, does not have the luxury to turn its backs on either the East or West, said Erdoğan, adding that Turkey will continue to shape its relations with all countries in line with its own interests and nation's expectations.

"We are among the first five countries with the most widespread network of foreign missions," he stated.

Reminding that Turkey has been supporting the Syrian people more than any other country, Erdoğan said: “We have used all our capabilities to bring peace and stability to these ancient lands which many terrorist organizations ranging from Daesh to the PKK and YPG have ensanguined.”

“With our cross-border operations, we have prevented the killing of millions of innocent people by the (Bashar Assad) regime or terrorist organization,” he pointed out, adding that Turkey will continue to support the war-torn country “until Syria actually becomes a place led by Syrians.”

Although there are many countries that host the persecuted, Turkey is home to the world's largest refugee population with nearly 3.7 million from Syria.

Turkey, with its Operation Spring Shield in March 2020, as well as with other cross-border operations, averted a humanitarian tragedy in Syria's northwestern Idlib province by protecting Syrian civilians against the Assad regime and its backers. A fragile truce was reached between Ankara and Moscow that has been substantially reducing the number of attacks on the last opposition bastion, where millions of people still struggle to survive.

“Thanks to the support of Turkey, Libyan can today once again look at the future with hope and can carry out democratic processes.”

Turkey’s role in the clashes between Azerbaijan and Armenia over the Nagorno-Karabakh region was another topic the president touched on.

Justice is another area of high significance, Erdoğan continued, saying that during the AK Party’s rule, the number of judges, prosecutors and other personnel have increased by 176%.

The number of judges and prosecutors, which stood at 9,349 when the party came to power, has reached 21,651 despite the damage inflicted by the Gülenist Terror Group (FETÖ), he underlined.

Within the scope of judicial reforms, the AK Party recently announced several steps it plans to take.

Two years ago, Turkey kicked off a series of reforms in its legal system in an attempt to enhance democracy in the country while promoting human rights and liberties. Recently, one of the most crucial steps in the process was taken as Erdoğan announced the Human Rights Action Plan.

The plan focuses on the topics of freedom, the right to security, the right to a fair trial, freedom of speech as well as the rights of women and the disabled. The enhancement of these rights and liberties has seen setbacks in the bureaucracy that have prevented them from being implemented properly. The plan has been prepared in accordance with the observations and reports of international mechanisms that monitor human rights and in cooperation with several human rights groups.

Now, all eyes are on the new constitution that is to be prepared in the upcoming two years, the final step in this period of reform.

“We have started to work for a new and civilian constitution for our people,” Erdoğan stated, "The 1982 Constitution has lost its validity, the new constitution will be a product of a transparent process."

Highlighting that a new and civilian constitution for Turkey is inevitable, Erdoğan stated that it will comprise national history as well as the ever-evolving global context.

Amid debates for a new civil constitution, Erdoğan recently said that Turkey will have a comprehensive, clear, democratic and liberal constitution to guide in the upcoming century.

Talk of a new Constitution came amid the government's new democratic reform initiative. The president referred to 2021 as the “year of reforms” and pledged that his party would overhaul the economy and judiciary.

The president also underlined that Turkey has undertaken significant policies in regards to its security.

Noting that security has always been a leading issue for Turkey, Erdoğan stated that terrorist organizations, particularly the PKK, have been dealt a heavy blow by the country.

He added that Turkey has also made significant progress in its defense industry. In 2002 Turkey had carried out just 62 defense industry projects, while the number today has surpassed 750. The budget allocated to these projects was raised from $5.5 billion (TL 43.78 billion) to $75 billion together with those in the tender process. Similarly, Turkey’s defense and aviation exports have increased from $248 million to $3 billion, the president highlighted.
Meanwhile, the Turkish Republic of Northern Cyprus (TRNC) President Ersin Tatar congratulated Erdoğan for being elected as the party chairperson. Minority leaders, including the Greek Orthodox Patriarch Bartholomew in Istanbul, Isak Haleva, chief rabbi of the Turkish Jewish Community and Yusuf Çetin, the metropolitan bishop of the Istanbul-Syriac Church also congratulated the president.