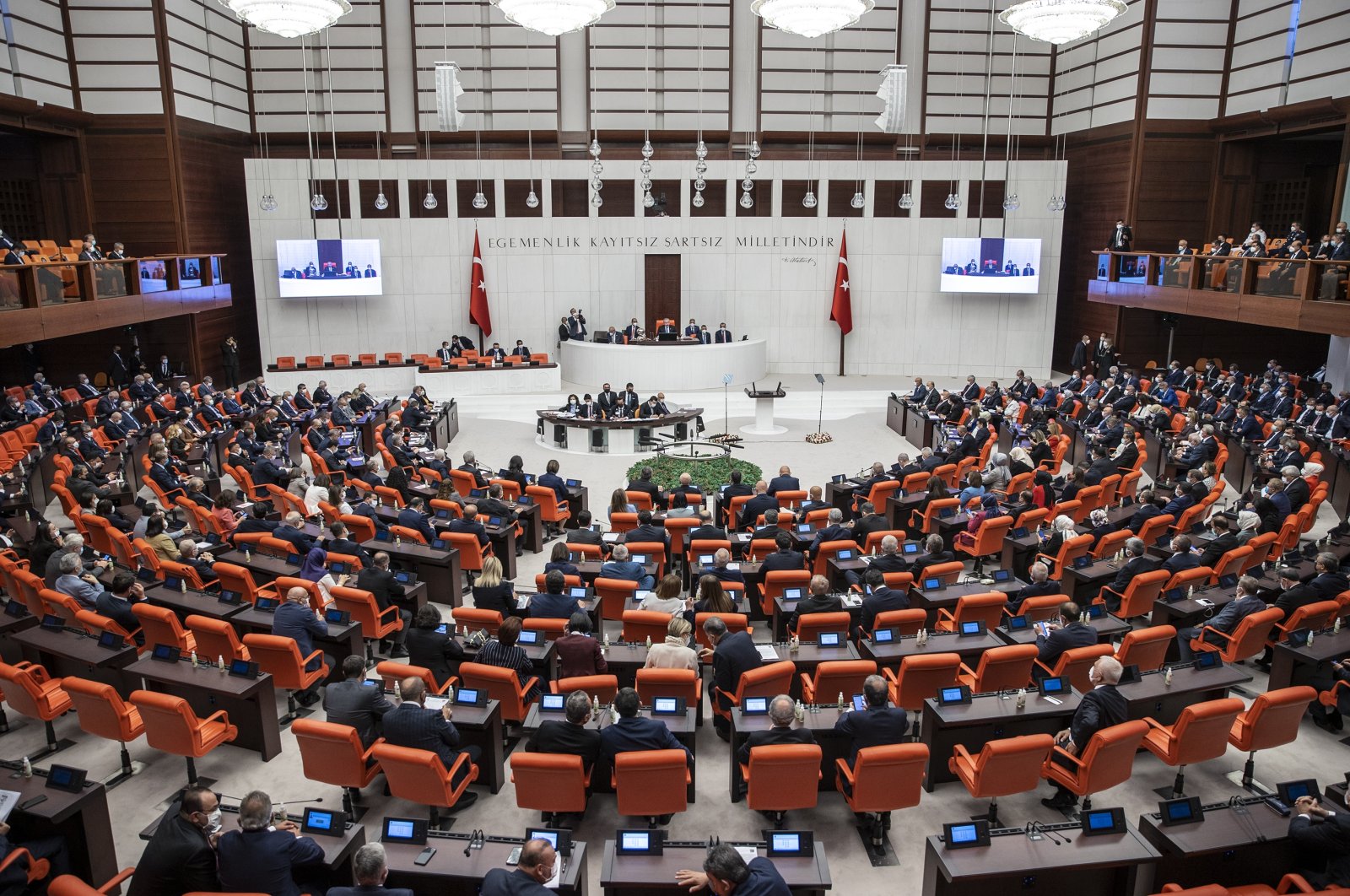 The Turkish Grand National Assembly (TBMM) launched the fifth legislative year of its 27th term on Friday. President Recep Tayyip Erdoğan made the opening speech at Parliament, which convened for a session chaired by Parliament Speaker Mustafa Şentop. Erdoğan expressed his hope that the new constitution proposal will be approved in Parliament.

"A new constitution, which will be prepared with the consensus of our assembly, if possible, will be the best gift we can give to our nation in 2023 [on the centennial of the republic]," he added.

Touching on another issue that has made headlines recently, Erdoğan said: "We have solved the so-called 'Kurdish problem' with all its dimensions, from rights and freedoms to development; the issue has been exploited by all segments, including terrorist groups."

Recently, the opposition parties in Turkey have made some public remarks on the Kurdish question. In the past decade, Turkey has made significant progress in terms of rights given to Kurds, despite many decades of negligence, including the establishment of a Kurdish TV channel, the introduction of Kurdish lessons in universities and other development projects. The community had fallen victim to a brutal campaign of terror by the PKK and the state's harsh measures to contain it.

Amendments to the elections and political parties law in relation to the 2023 elections, the fourth judicial reform package and a tax law amendment are expected to be the most important agenda items in the new legislative year.

The Paris Agreement to fight climate change will be one of the first international agreements to be submitted to Parliament for approval. Countries that have ratified the Paris Climate Agreement must fulfill their commitments to limit warming to 1.5 degrees Celsius (2.7 degrees Fahrenheit) and cut greenhouse gas emissions to zero by 2050.

Following the opening ceremony, Parliament will take a break and reconvene work on Tuesday, Oct. 5.

One of the most important developments of the new legislative year will be the election and political parties law change.

As the BBC Turkish reported Friday, there is no rush to bring the election law package before Parliament, on which the ruling Justice and Development Party (AK Party) and its alliance partner the Nationalist Movement Party (MHP) have agreed on a 7% election threshold.

The current 10% threshold using the highest averages method – known as the D'Hondt method – was introduced with the 1982 Constitution that was adopted in a referendum after the 1980 military coup. While the AK Party promised several times to remove the threshold during the last decade, no steps had been taken so far on the issue.

There is no election law change on the AK Party's October agenda either. According to the information reflected in the lobby, the election law package may be delayed after the budget negotiations in order to prevent early election discussions.

Officials from the government and the AK Party have frequently dismissed the possibility of early elections and the opposition’s demand to return to a parliamentary system.

Turkish voters narrowly endorsed an executive presidency in the April 16, 2017 referendum with 51.4% of the votes in favor. The official transition to the new system took place when President Erdoğan took the presidential oath of office in Parliament after the June 24, 2018, general elections, in which he won 52.6% of the votes.

The next presidential and general elections are scheduled to be held in 2023.

The work continues on the social media regulation that the government put on its agenda on the grounds of "fighting fake news and disinformation" due to the posts made on social media after the forest fires in the summer months.

However, it is stated that the legal regulation, such as the amendment to the election and political parties law, may be delayed after the budget negotiations. In the AK Party's draft, it planned to impose sanctions on both users and social media organizations for social media posts that are determined to be organized "for a specific purpose."

Plans are in place to establish a unit within the Information Technologies and Communication Authority to supervise the handling of such posts. Social media users who post disinformation can be subject to prison terms and social media organizations can receive heavy fines if they do not remove the content within 24 hours.

The first step in strengthening social media policies was taken last year when social media providers were asked to open representative offices in Turkey. The new regulation will be a continuation of this initial step.

The AK Party, which has passed three judicial packages before the Parliament, continues to work on the fourth judicial package which it is expected to present in the new year.

The proposal for a new constitution by the AK Party and MHP is expected to be announced to the public in the new year.

MHP leader Devlet Bahçeli announced that he had completed the "new constitution" proposal in May and conveyed it to Erdoğan. Then, Erdoğan appointed a committee under the chairpersonship to work on the new constitution.

President Erdoğan declared that they are "determined to present the new constitutional proposals to the nation's discretion" in the first months of next year. It is said that AK Party has mostly completed its new constitution proposal and will submit it for the MHP to review before the new year.

Turkey needs a new constitution and the TBMM has the capacity to create it, Parliament Speaker Mustafa Şentop also said Thursday.

Opposition parties, which are preparing for the 2023 elections with the promise of a "reinforced parliamentary system," will speed up the work.

In this context, the representatives of the six opposition parties, including the main opposition center-left Republican People's Party (CHP), the right-wing Good Party (IP), the conservative Felicity Party (SP), center-right Democrat Party (DP), conservative Future Party (GP) and center-right Democracy and Progress Party (DEVA), who have come together twice to bring their work on the parliamentary system into a single text, will meet for the third time on Tuesday, Oct. 5.

At the meeting, opinions and suggestions on the basic principles of "impartial, non-partisan president," a "strong parliament" and "independent judiciary," which are included in the parliamentary system work of the parties and announced to the public, will be discussed.