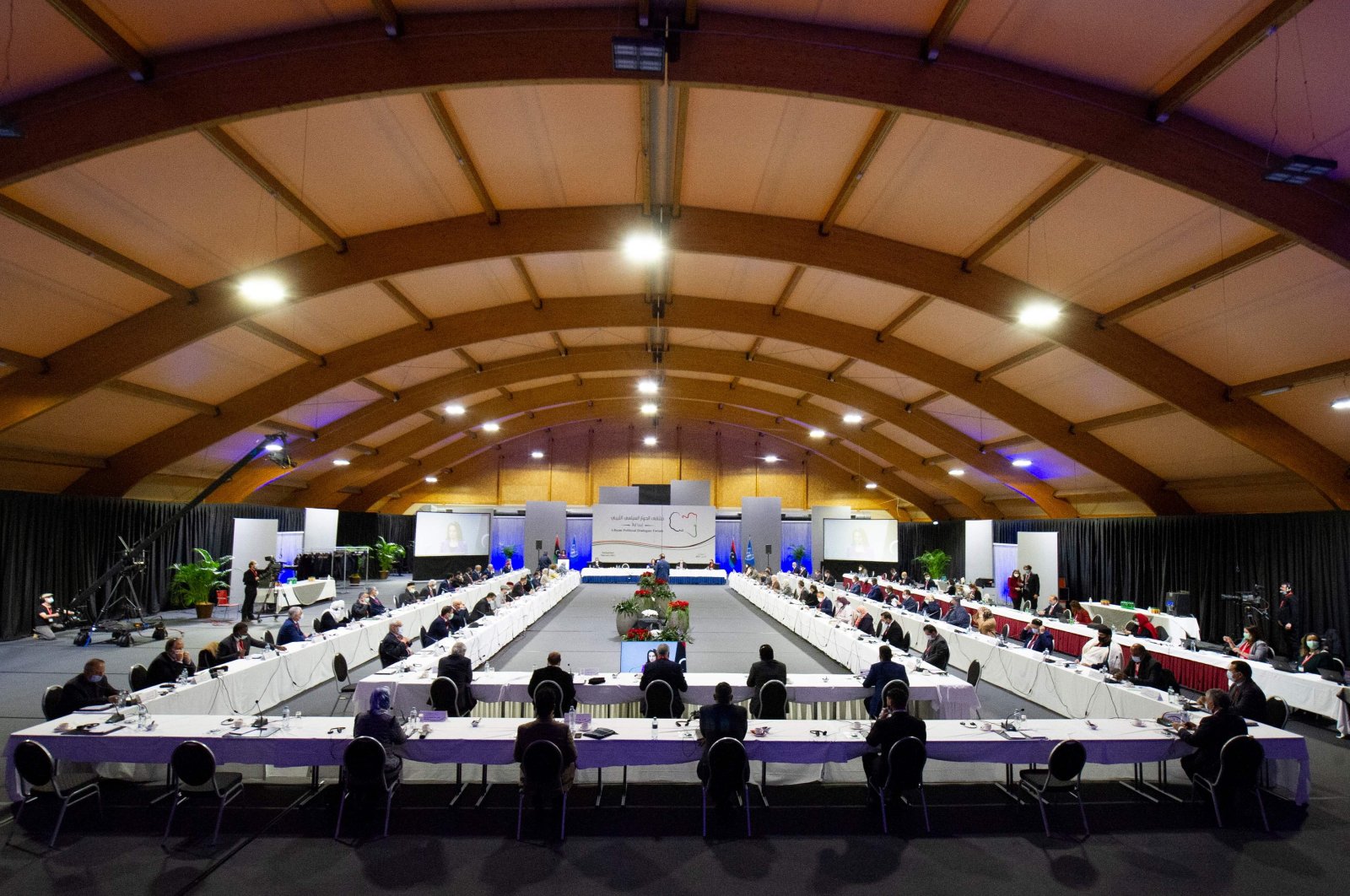 This handout picture made available by the United Nations (UN) shows delegates standing during the national anthem at the opening of the Libyan Political Dialogue Forum on February 1, 2021 at an undisclosed location near Geneva to choose a new temporary executive (AFP Photo)
by DAILY SABAH Feb 01, 2021 12:46 pm

The Libyan election vow must be honored 'at all costs,' the U.N. said as the country's delegates gathered to choose new temporary leaders to guide oil-rich and conflict-ravaged Libya until December

Libyan delegates came together in Geneva on Monday to choose a new temporary executive under United Nations-led talks that will govern and prepare the North African state for national elections at the end of 2021.

The 75 participants, ranging from regional and tribal figures to representatives of political factions, at the Libyan Political Dialogue Forum have until Friday to select a prime minister and a three-member presidency council from a list of 45 candidates, the U.N. Support Mission in Libya (UNSMIL) said in a statement.

By picking that date, "you have put an indelible mark on the calendar," acting U.N. envoy Stephanie Williams told the delegates.

"This decision was greeted with the overwhelming approval by your compatriots, and it is a commitment that must be honoured at all costs," she said.

The list of candidates unveiled Saturday by the U.N. includes 21 names for the position of prime minister and 24 for the presidency council. "This new interim, unified executive authority will be primarily tasked to lead Libya to national elections set for Dec. 24, 2021, and to reunify state institutions," a UNSMIL statement said.

Among the names for the premiership are the Government of National Accord’s (GNA) Interior Minister Fathi Bashagha and Deputy Prime Minister Ahmed Maiteeg, both of whom are from the coastal city of Misrata.

Nominations for the presidency council include GNA Defense Minister Salah Eddine al-Namrush and head of the Tripoli-based High Council of State Khalid al-Mishri.

Council candidates from the east include key powerbroker Aquila Saleh, the current speaker of the Tobruk-based parliament, and Mohammed al-Bargathi, Libya's ambassador to Jordan.

Williams stressed that the temporary leaders should strive toward national reconciliation and the restoration of democracy.

"This project is not about power-sharing or dividing the cake," she said.

"Rather, it is to form a temporary government composed of patriots who agree to shoulder and to share the responsibility to put Libyan sovereignty and the security, prosperity and the welfare of the Libyan people above narrow interests."

The list of candidates was approved in political talks held in November between the 75 delegates selected by the U.N. to represent a broad cross-section of Libyan society.

While the U.N.-backed talks have progressed, many Libyans fear competition for posts could yet trigger fresh fighting, unraveling a cease-fire that has largely held since October.

Oil-rich Libya has been torn apart by civil war since a NATO-backed uprising that ousted long-time dictator Moammar Gadhafi in 2011.

In the Libyan conflict, Russia, France, Egypt and the United Arab Emirates (UAE) have supported Haftar against the legitimate Libyan government, backed by Turkey and Qatar.

The political talks kicked off in mid-November in Tunisia, where the 75 delegates were tasked with laying out a road map toward elections.

U.N. Secretary-General Antonio Guterres on Jan. 19 hailed the "tangible progress" made in recent months to restore stability in Libya.

His comments came in a report to the U.N. Security Council in which he demanded that all foreign troops and mercenaries involved in the Libya conflict leave the country by Jan. 23.

However, some 20,000 foreign troops and mercenaries, by U.N. estimates, have ignored the deadline to pull out of Libya.

The Russian Wagner Group, which is owned by businessperson Yevgeny Prigozhin, a figure close to Russian President Vladimir Putin, is known to be one of the primary entities that sent mercenaries to fight in Libya.

Most of the foreign forces are concentrated around Sirte at the Jufra air base held by Haftar's forces 500 kilometers (300 miles) south of Tripoli and further west in Al-Watiya.