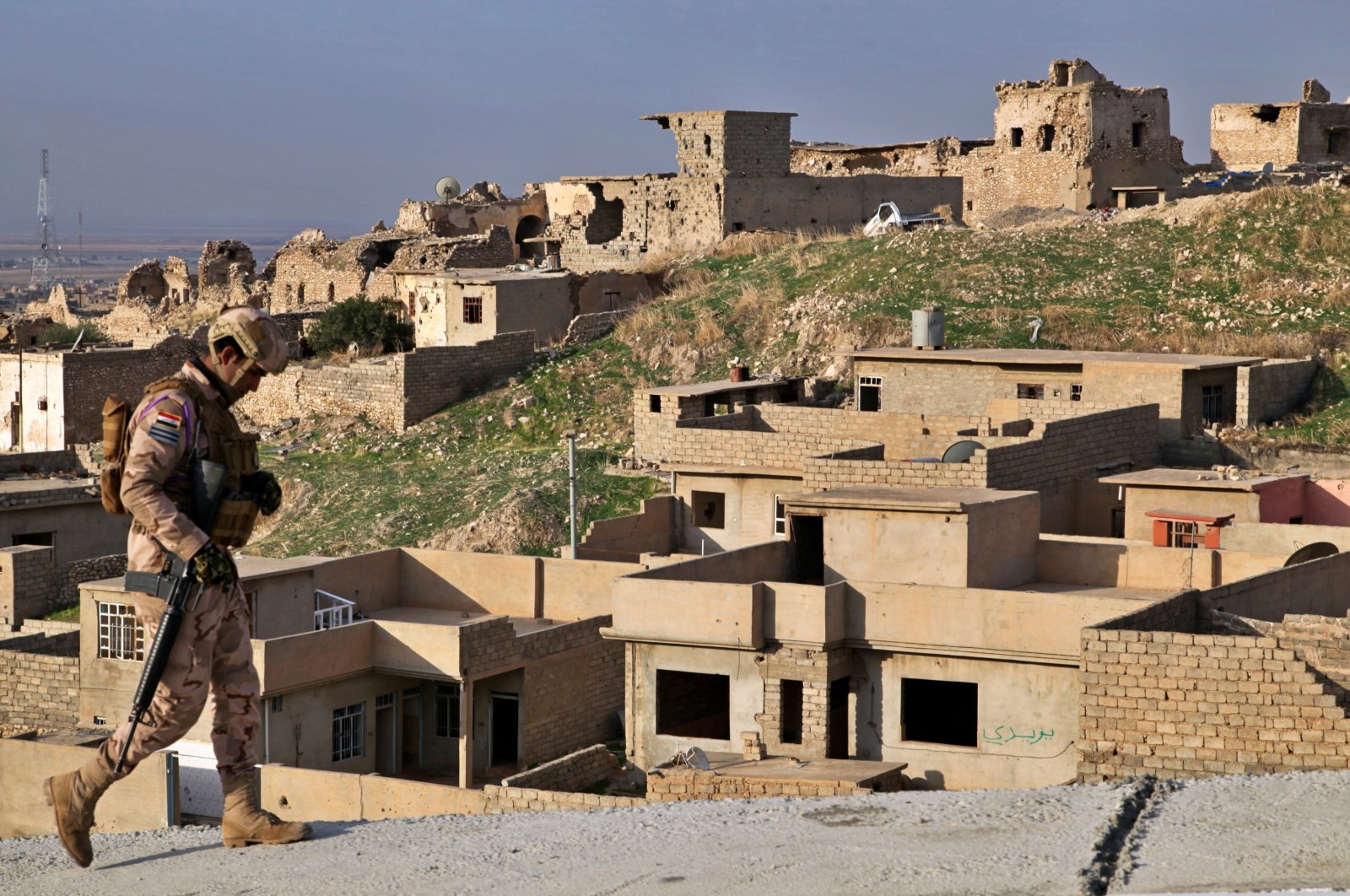 Turkey may soon launch a counterterrorism operation against the PKK in Sinjar, but experts warn that the success of such an operation strictly depends on Iraqi and KRG cooperation

Putting an end to four decades of terrorism is no easy task, but Turkey has shown determination to eliminate the terrorist group PKK not only at home but also from Sinjar, northern Iraq, where the terrorists have established an alternative headquarters. To this end, Turkey may soon carry out a counterterrorism operation in Sinjar or provide assistance to the Iraqi military. According to analysts, a partnership between Turkey and Iraq to carry out such an operation would not only deal a heavy blow to terrorist groups like the PKK and Daesh, but it would also thwart the formation of a terror corridor by the PKK’s offshoots and restore stability in the region, although such partnership would require the sincere commitment of Baghdad and Irbil administrations.

On Jan. 22, President Recep Tayyip Erdoğan said his famous phrase: “We may come there overnight, all of a sudden,” which he had used shortly before Turkish counterterrorism operations in northern Syria. According to Can Acun, a foreign policy expert, Turkey may, in fact, launch new operations in Sinjar as early as the spring.

Highlighting the fact that Turkey has already been carrying out counterterrorism operations in northern Iraq, Acun said Ankara has been trying to establish coordination with Baghdad and Irbil.

“We see that the PKK exploits instability in the region to strengthen itself, and this poses a threat to not only Turkey but also the interests of the Baghdad and Irbil administrations,” Acun said, adding that the elimination of the PKK would work in favor of all legitimate actors in the region.

The Iraqi central government and the Kurdistan Regional Government (KRG) signed a U.N.-led Sinjar deal back in October 2020 to clear terrorist elements, including the PKK and Daesh from the region, and restore federal authority.

While noting that the nature of the operation, whether it will be a joint or a unilateral one, is still uncertain, Acun said the Iraqi military aspires to eliminate PKK-linked groups like the Sinjar Resistance Units (YBŞ) from the area and Turkey is ready to provide support if necessary.

“Likewise, there is a similar expectation regarding the Makhmur and Qandil regions,” he added.

Ankara has been working around the clock, and top Turkish and Iraqi officials have held several meetings in recent months to discuss the issue of Sinjar.

Most recently, the National Security Council (MGK) discussed the matter and Defense Minister Hulusi Akar informed council members about his recent visit to Iraq. A statement released shortly after the meeting noted that Ankara would “continue fulfilling its duties to ensure peace.”

“We see that the PKK terrorist group has been under serious pressure in Iraq, and its operational capabilities have been limited to a large extent,” Acun said, adding that the terrorist group’s presence in Iraq is critical for its survival, but it is unable to withstand Turkish military operations as it is confronted by the KRG.

“Sinjar is a strategic location as it serves as the second Qandil (PKK headquarters) and in terms of cooperation with its terrorist counterpart in northern Syria,” professor Cengiz Tomar, the rector of Ahmet Yesevi University, told Daily Sabah. Noting that Turkey may have to immediately respond to any threats or mobilization of terrorist forces in the region, Tomar said an operation against Sinjar is always “an option.”

Turkey shares a 367 kilometer-long (228 miles) border with Iraq and has been carrying out a series of counterterrorism operations against the PKK terrorists in the mountainous Qandil region, and the Turkish army has dealt a heavy blow to the terrorist group in recent years.

The country sees the elimination of terrorist groups like the PKK not only as an existential threat but a priority to put an end to the four decades of violence, which has claimed the lives of 40,000 people, including women, children and the elderly.

The PKK established a base in Sinjar in mid-2014, on the pretext that it was fighting against Daesh to protect the local Yazidi community. However, rather than providing protection for the Yazidis, the PKK terrorists ended up forcefully recruiting their children, torturing the locals and disrupting educational and health services. The Yazidis, in return, have staged demonstrations to protest the oppression, demanding the Iraqi central government and the KRG to regain control from the terrorists.

But cooperation with Turkey is vital to carry out a successful operation to drive out the PKK in Sinjar, according to Tomar, who pointed out that the main reason the PKK terrorists are still present in the region is due to the lack of strong administrations in Baghdad and Irbil.

“If the Iraqi central government and the Kurdistan Regional Government (KRG) had control over their lands in the complete sense, such operations would have been unnecessary,” Tomar said. He added that cooperation on such an operation would be more effective because they would utilize local forces and would completely eliminate the potential of international criticism, in addition to their economic and security benefits.

Cooperation with Turkey would contribute to regional stability and deal a heavy blow to attempts by the YPG – the PKK’s Syrian offshoot – to establish a terror corridor in the region. The Turkish military already prevented the establishment of a de facto autonomous region by YPG terrorists in a successful trio of operations.

U.S. not likely to welcome Turkey's joint operation with Iraq

A joint Turkish-Iraqi operation in the region would also disturb Iran, the U.S., which supports the YPG in Syria, and Europe, to a smaller extent, according to Tomar.

The U.S. insists that it does not aim for the formation of a YPG-led state in northern Syria, but Washington has failed to convince Turkey about this, according to the country’s former special envoy for Syria James Jeffrey, who recently claimed that establishment of such a state would not benefit the U.S. nor Russia.

But the U.S. continues to be one of the biggest supporters of the YPG despite evidence proving its direct links with the PKK, according to professor Hüseyin Bağcı, who is also the president of Ankara-based Foreign Policy Institute.

Turkish officials have criticized Washington for refusing to acknowledge Turkey’s legitimate security concerns, as YPG terrorists continue to pose a threat to the country’s national security.

“The PKK and YPG are like two sides of the same coin,” Bağcı said, as he argued that although an operation in Sinjar was possible, its results fully depend on Iraq’s sincerity and cooperation.

For him, the complete elimination of PKK and Daesh elements from the region would only fully succeed if all NATO members waged a determined fight against the terrorists, but such pursuit seems highly unlikely, at least for the time being.

“We will see how sincere Iraq is regarding the matter,” Bağcı said, adding that the complete destruction of PKK headquarters in Qandil and Sinjar regions would only be possible if Iraq authorized Turkey to do so, but this does not seem viable as he claimed the KRG administration’s “sincerity is questionable.”

The KRG and PKK have had an on-and-off relationship, as the former had enforced a unilateral economic blockade against the YPG-led administration. Their relations seemed to have improved slightly following Turkey’s cross-border anti-terror operations in northern Syria. While the KRG had previously called PKK's presence in Sinjar “unacceptable” and urged terrorists to leave the area, the administration also sent medical aid to the YPG in northern Syria at the beginning of the COVID-19 pandemic in 2020.

Although there is no magic wand to eliminate the PKK and its offshoots from the region, Acun says it looks like the terrorist group will lose its scope of power in Iraq to a great extent by next year.