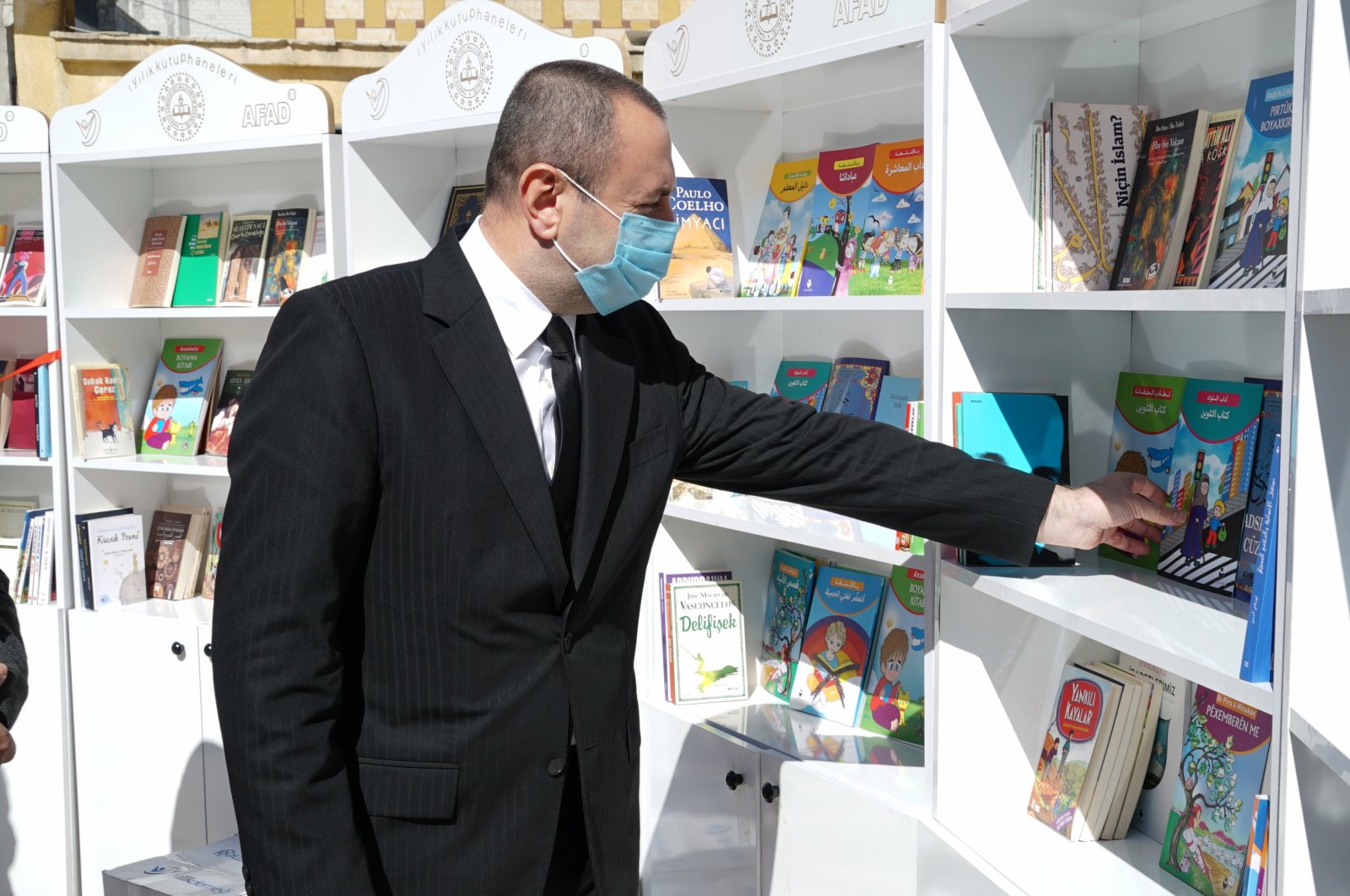 A Turkish NGO opened 400 libraries in northern Syria in collaboration with the Turkish state, while another agency sent 10 truckloads of aid to the region

A Turkish aid group has successfully set up 400 libraries in areas liberated from YPG terrorists, the Syrian offshoot of the PKK, in northern Syria, while a Turkish aid organization sent 10 truckloads of humanitarian aid to civilians in the area.

The initiative called “Goodness Libraries” is also supported by Turkey’s Disaster and Emergency Management Authority (AFAD) and the Education Ministry.

The aid group’s Gaziantep representative Cavit Karakaş told AA that children were euphoric about the initiative, which started last year.

“We’ve completed 400 libraries so far. Each of them has 100 books in Turkish, Arabic and Kurdish,” Karakaş said, adding that Iyilikder provides bookshelves and books, while the Turkish Education Ministry assists in selecting the schools and logistics.

The books on offer in libraries include children’s books, novels and more, including books translated to Arabic from Turkish. They have all been approved by Turkey’s Education Ministry, the representative noted.

Karakaş continued by saying that they will also open new libraries for children in the Syrian city of al-Bab.

He also noted that the project was just a start and that they aim to increase the number of books in libraries as well as prepare education programs and reading activities with the children.

Meanwhile, a Turkish aid group on Monday sent 10 truckloads of humanitarian aid to Syrian civilians in need in border regions near Turkey.

Yusuf Bülbül, the Kahramanmaraş representative of the Humanitarian Relief Organization (IHH), reported that they visited camps in Idlib, northern Syria in February and that the people living there urgently need food, water and shoes.

With support from benefactors and a company, 10 trucks carrying drinking water set off to help the people in need in camps in Idlib.

The area has been the subject of multiple cease-fire understandings that the Assad regime and its allies have frequently violated.

Syria has been embroiled in a civil war since early 2011 when the Assad regime cracked down on pro-democracy protests with unexpected ferocity.

Over the past decade, hundreds of thousands of people have been killed and more than 10 million displaced, according to U.N. officials.

After liberating northern Syrian towns from YPG/PKK and Daesh terrorists, Turkey rolled-up its sleeves to reconstruct hospitals, schools, mosques and roads destroyed by the terrorist organization. Within the scope of ameliorating the region’s social infrastructure, people were given food and clothing by several nongovernmental organizations while roads and buildings were rebuilt.

Thanks to the measures taken by Turkish security forces, civilians, who had to flee the region due to the terror group’s oppression and the following military operation, started to return to their homes.

Hosting more than 3.6 million Syrians and spending billions of dollars on their needs, despite the ongoing conflict, Turkey now looks to establish prosperous settlements and improve the living conditions for Syrians in northern Syria.

Local people living in areas held by the YPG have long suffered from its atrocities, as the terrorist organization has a notorious record of human rights abuses, ranging from kidnappings, recruitment of child soldiers, torture, ethnic cleansing and forced displacement in Syria. The YPG has forced young people from areas under its control to join its forces within the so-called “compulsory conscription in the duty of a self-defense law.” Under this practice, young people between the ages of 18 to 30 are forcefully recruited for nine months, with the possibility of an extension, if necessary. Those who refuse to join the group “face serious repercussions,” including imprisonment.

Several Turkish humanitarian agencies, including the Turkish Red Crescent, have been providing assistance to the people in the area.

NGOs have also taken an important role in aid efforts in the region. One of these NGOs, the IHH distributed 153 million loaves of bread to local people in a year, the foundation’s vice president of Syria activities said in January.

Turkey’s efforts in northern Syria to establish stability, including successful counterterrorism operations, have enabled hundreds of thousands of Syrians living in the country to return home to areas liberated from terrorists.