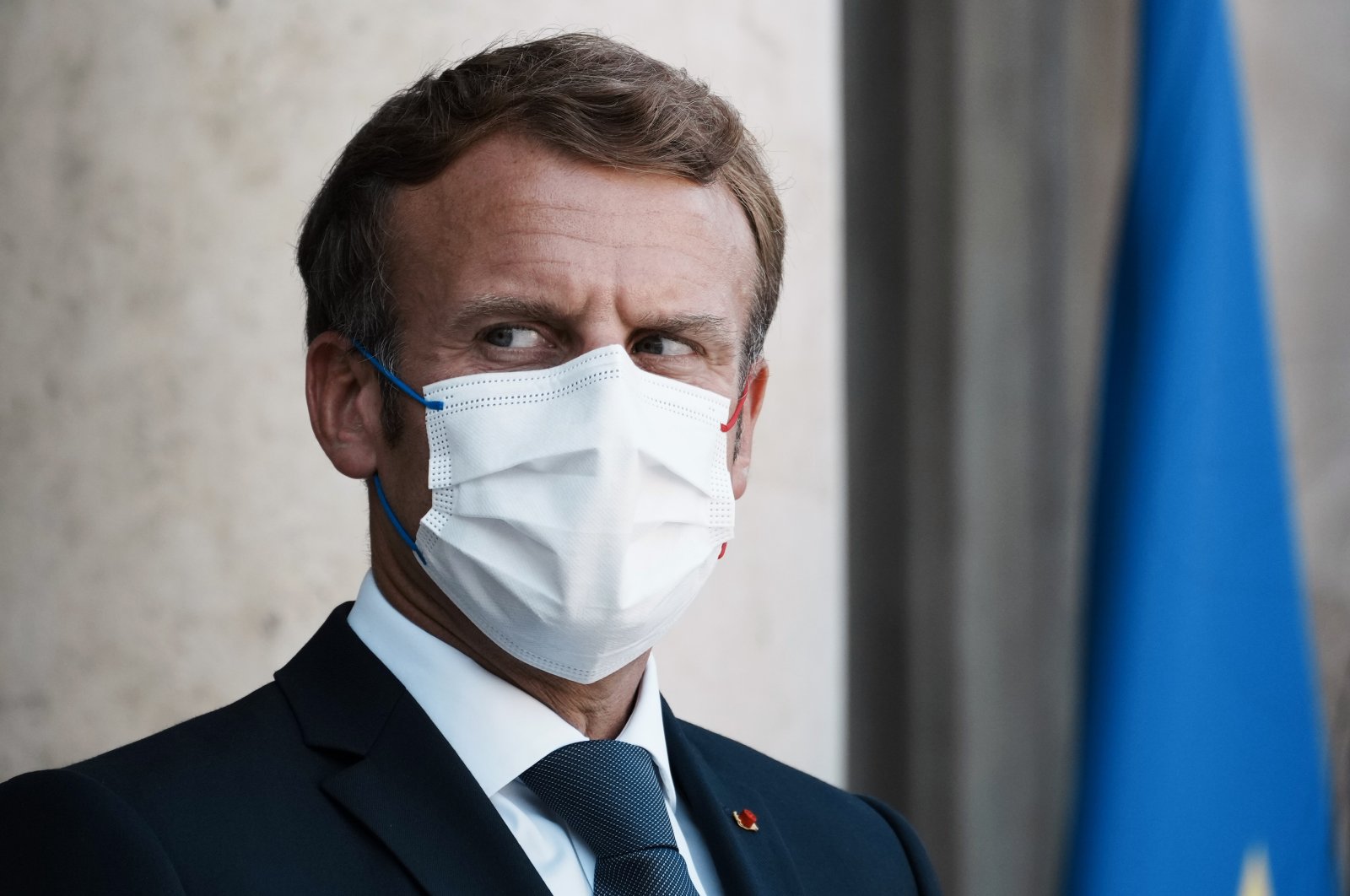 Newly discovered documents published late Tuesday exposed that cement giant Lafarge informed France's intelligence services about its relations with Daesh in Syria, meaning French institutions and officials were aware the company was cooperating with the terrorist group. The revelation came a week after French President Emmanuel Macron’s visit to Daesh’s former stronghold Mosul, where the terrorist group had committed mass atrocities against Iraqi civilians including Christians, Yazidis and other minorities.

Macron, who has vowed to fight against "Islamic terrorism" in Iraq, had previously accused Turkey of supporting Daesh in early December 2019, claiming that Turkish authorities were “working with Daesh intermediaries from time to time.”

The French leader's accusations were vehemently denied by officials in Turkey, the country which has put forward an effective fight against the terrorist group in several cross-border military offensives.

The shocking revelations about the cement giant and French authorities are serious as the documents contradict France and Macron's position on the fight against terror. Lafarge has a network of established relations it uses in the region to cooperate with terrorist organizations and continue operating. The documents obtained by Anadolu Agency (AA) reveal that French intelligence agencies were aware of how the company was running in Syria and chose to use its network to gain more intelligence, without warning Lafarge it was committing a crime.

The disclosures came just a week after Macron's visit to Daesh's former stronghold in Iraq, Mosul.

The French president also drew ire for his support of the YPG, the Syrian wing of the PKK terrorist organization, which is recognized as a terrorist group by the United States, European Union and many other countries. Macron has hosted YPG representatives at the Elysee Palace before, triggering an outroar from Turkey, which regards the PKK-linked group's presence near its southern border as a security threat due to its organic ties to the separatists in the country.

Lafarge was investigated on charges of "participating in crimes against humanity" on the grounds that it paid Daesh to carry out its activities in Syria. The former CEO of the company was also charged with paying the Daesh terrorist group to allow the firm to continue operating in Syria. The French company was said to have paid Daesh and other militants around $5.6 million (TL 46.71 million) between 2012 and 2014 so that production at its plant in northern Syria would not be interrupted. Lafarge's Syrian subsidiary Lafarge Cement Syria was also thought to have used fake contracts to buy fuel from Daesh.

Veillard stated in his email that Lafarge was still active in Syria and needed to establish relations with “local actors” in order to continue its work. The director of security asked the intelligence service how much risk their executives and headquarters were in, noting that there had been some negative press coverage about them. Responding to Lafarge, the intelligence service officer informed him of a date to discuss the situation.

After the scandalous discussion of Lafarge-Daesh relations in France and the reflection of the issue in the court, the intelligence officer, code-named A.M. 02, gave a statement in court on Nov. 18, 2018.

According to the court transcript, the officer admitted that Lafarge was his source of information in Syria. The intelligence officer told the judge how the French secret services took advantage of the Lafarge factory. In the records, the intelligence officer did not exclude Daesh, saying that during the 2012-2014 period Lafarge sent cement to all armed groups in Syria, including Hayat Tahrir al-Sham (HTS), the al-Qaida-linked terrorist group formally known as the Nusra Front.

"We approached the situation purely opportunistically, taking advantage of Lafarge's continued work," the intelligence officer said in the court.

The details of sending cement to Daesh were discussed in the correspondence between Veillard and the French Ministry of Interior intelligence on Sept. 1, 2014.

“Can you give more details about the cement going to Daesh?” the French intelligence agent asked, making clear that the French state was aware of Lafarge's relationship with the terrorist organization at that time.

In the documents seen by AA, one striking finding is that more than 30 meetings took place between Lafarge and the French domestic, foreign and military intelligence services between 2013 and 2014 alone.

Daesh is known to have built strong shelters and tunnels against the United States-led coalition forces with the cement it was provided.

Veillard, the company's head of security, testified to police on Nov. 30, 2017, when Lafarge was accused of committing crimes against humanity by financing terrorist organizations.

According to the transcript obtained by AA, Veillard tried to prove that he had informed the French state and intelligence agencies of everything he had done during his deposition.

The annexes to the statement included documents regarding the interview with the Lafarge security manager in the field, the conditions as they developed on the ground and the information he received.

It was understood that Veillard shared information about the conflicts to French intelligence, updating them on the balance between the military and armed groups.

On one of the pages in question was a note handwritten by Veillard in October 2013, that read: "Sent to French foreign intelligence (DGSE)."

In France, in 2016, the news was published that Lafarge financed the Daesh terrorist organization in the Syrian civil war.

According to the French press, the company provided materials and fuel to the organization in addition to paying bribes to Daesh in order to continue working in the Jalabiya region of Syria, a town located close to Ain al-Arab.

While the company admitted in 2017 that it had made payments to armed groups to keep the factory open, it denied accusations of "participating in crimes against humanity."

Eight executives from the company, into which an investigation was launched, were charged with financing terrorism and collaborating in crimes against humanity.

However, the charge of "participating in crimes against humanity" that was brought against the company in June 2018 was dropped in November 2019.

Nongovernmental organizations (NGOs) reacting to the dismissal of the charge brought the issue to France's highest court.

The French Court of Cassation was expected to reach a decision on Tuesday that would pave or close the way for Lafarge to be charged with complicity in crimes against humanity for financing Daesh terrorists. In the decision, the court said that Lafarge should face investigation on a charge of complicity in crimes against humanity in Syria, overturning a previous ruling.

According to another intelligence document revealed earlier this year, French state officials were informed about payments made by cement giant Lafarge to Daesh terrorists in Syria. The confidential document from August 2014 notes that Lafarge had forged a deal with Daesh to maintain commercial operations in Syria, Liberation daily reported. According to the deal, Daesh terrorists allowed Lafarge to continue to carry out operations in the seized factory in northern Syria’s Jalabiya in return for 13 million euros ($15.3 million). Lafarge faces a series of cases over violating the embargo, threatening the lives of its workers and financing a terrorist organization.

In a speech in 2019, President Recep Tayyip Erdoğan once again censured the vast amount of ammunition and heavy weapons provided for the PKK's Syrian branch, the YPG, by Turkey’s allies, particularly the U.S. He also raised another important risk for Turkey’s national security – as the YPG not only has arms and ammunition at its disposal but significant facilities such as Lafarge’s vast plant in Jalabiya, which the group uses as a base and manufacturing site.

“We are seeing 90 kilometer-long tunnels in northern Syria. How do they build these tunnels? Where is the cement to construct them coming from?” the president asked. “The cement for the tunnel construction comes from Lafarge’s plant in the region, a French firm,” he said, demanding an explanation from France, one of Turkey’s allies in NATO.