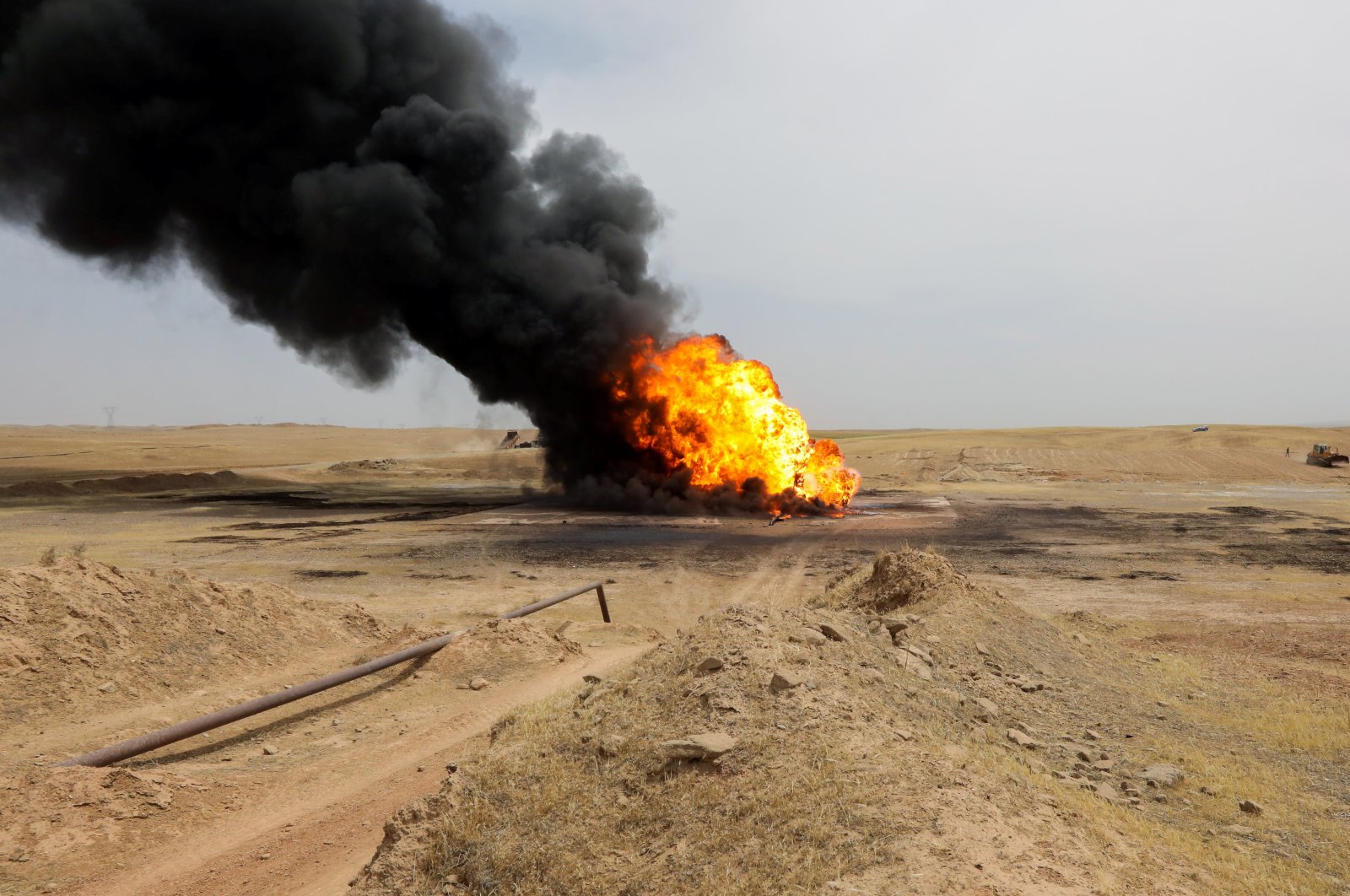 Flames and smoke rise from oil wells inside the Bai Hassan oil field, which was attacked by militants, close to the northern Iraqi city of Kirkuk, Iraq, May 5, 2021. (REUTERS Photo)
by Dilara Aslan May 07, 2021 1:12 pm

As Ankara, Irbil and Baghdad voice criticism regarding the PKK's presence in northern Iraq while exploring means to eradicate it, the terrorist organization continues its attempts to gain dominance by risking civilian lives

Improvised explosive devices (IEDs) and mines planted by the PKK terrorist organization and its offshoots in northern Iraq increasingly risk the lives of civilians in the region, security sources on the ground stated.

The IEDs and mines have caused significant deaths and injuries of many innocent civilians, sources told Daily Sabah, saying that the local people have been warned of the threats.

Sources pointed out that mines were planted on the roads leading to some villages and civilians, therefore, have to be cautious since their lives and properties are in danger.

They stated that one civilian who was on his way to work in his car was severely injured when a mine exploded that was planted earlier on the road in the Kurdistan Regional Government's (KRG) Irbil province’s Sidekan region.

Moreover, one peshmerga soldier on his way home lost his life in March due to mines in the same region.

Sources said that transit to a village in northern Duhok province’s Amedi district was closed because of the mines planted by the terrorist organization. They added that reportedly this practice of the PKK is fairly common.

Iraqi Governor Ali Tatar last month renewed his call to remove the presence of the PKK terrorist organization from Duhok. He said PKK terrorists have taken control of some areas in the Amedi district in the province.

Security sources said that the terrorist organization risks the lives of civilians including women and children to gain dominance over the people of the region by threatening them with IEDs and mines and in order to disrupt peace.

Locals in PKK-controlled areas have long suffered from its atrocities. The terrorist organization has a lengthy record of human rights abuses, ranging from kidnappings, recruiting child soldiers, torture as well as displacement of Yazidis, a minority group.

Most recently, it was reported by local news outlets on Thursday that the PKK attacked Peshmerga forces in Sidekan. Speaking on the issue, Peshmerga commander Bahram Arif Yasin stated that the terrorist group attacked the Peshmerga, but no lives were lost.

Apart from risking the lives of soldiers and civilians, the PKK also disrupts service projects in the region.

Though the central government and the KRG in Iraq are cooperating to remove the PKK presence from the country’s northern regions, initiatives have been insufficient so far as the terrorist group joined forces with Iran-backed militias in the region.

Speaking about the PKK presence in the region, KRG Prime Minister Masrour Barzani said in an interview with France24 in March that: "The PKK, unfortunately, has taken advantage of our government's goodwill and occupied land. We hope this won't escalate and that the PKK will realize their military presence here will definitely not be tolerated by us."

Within this scope, the Turkish Armed Forces (TSK) regularly conduct cross-border operations in northern Iraq. Turkey has long been stressing that it will not tolerate terrorist threats posed against its national security and has called on Iraqi officials to take the necessary steps to eliminate the terrorist group. Ankara previously noted that if the expected steps were not taken, it would not shy from targeting terrorist threats.

In late April, the TSK launched a large-scale military operation against terrorists in northern Iraq. The PKK targets are being struck in the Metina, Avashin-Basyan, Zap and Qandil regions.