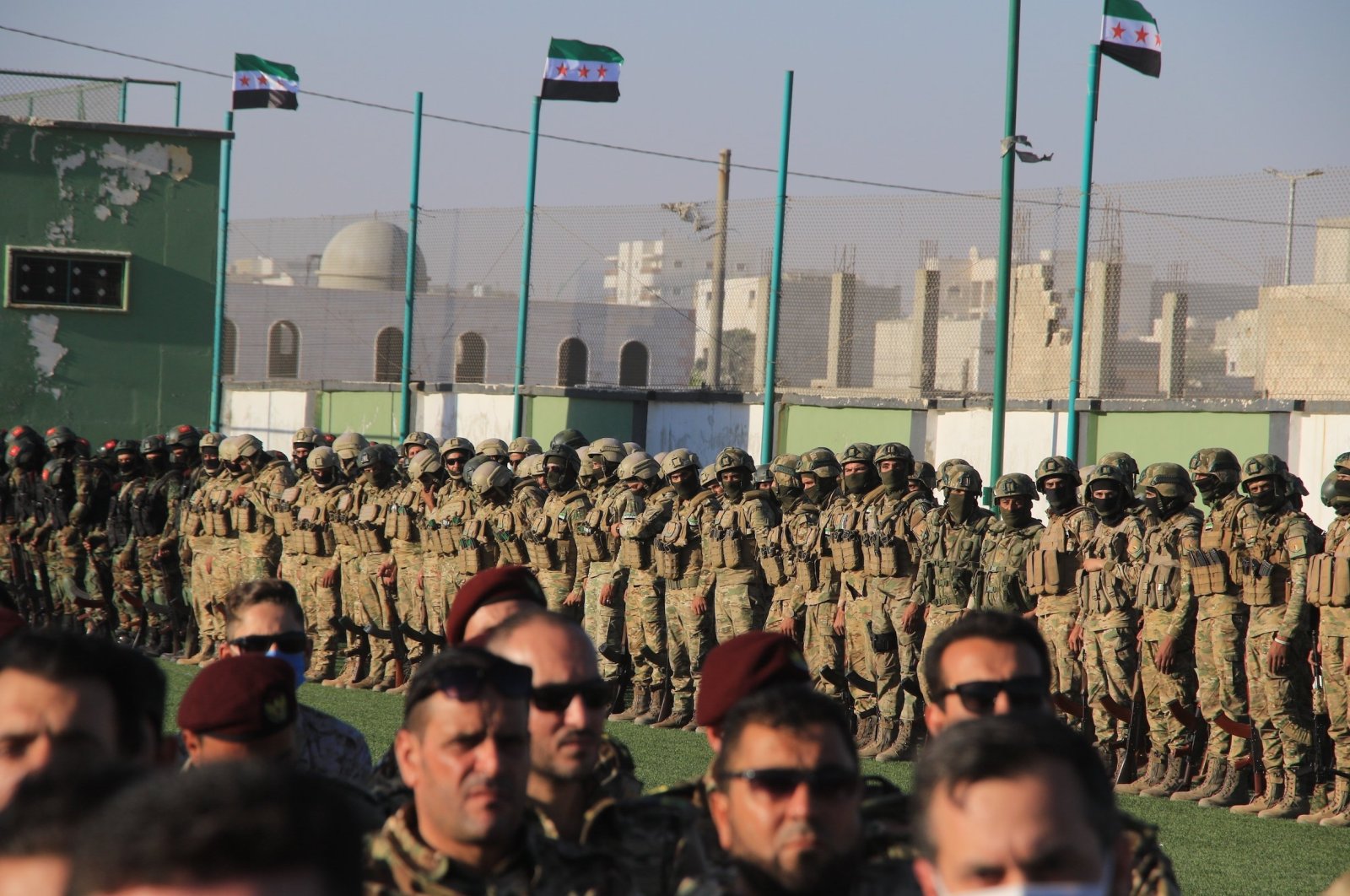 A major Turkey-backed Syrian opposition group announced Saturday that it is ready to restart military operations against terrorist organizations in northern Syria.

The Syrian Liberation Front (SLF) branch of the Syrian National Army (SNA), said on Twitter that it is "determined to clear our regions from all terrorist organizations," especially referring to the PKK terrorist group's Syrian branch YPG and the Daesh terrorist group.

It also emphasized that the front's support to Turkey on the ground would continue.

It was reported on Sunday that the YPG's attempt to infiltrate the front lines of the SNA from Tal Rifaat in northern Syria had been prevented.

The YPG has been digging entrenchments in the Syrian border town of Tal Rifaat near the Turkish border, as officials said Turkey is considering launching a new counterterrorism operation amid threats.

According to recorded drone footage, the YPG/PKK terrorists are busy digging trenches and have turned the village of Sheikh Isa into a military headquarters. The village has been used as the launching area for recent attacks targeting Turkey. They have also forcefully confiscated homes of local residents in the area, where no civilians can be seen on the streets.

The terrorists have had control of Tal Rifaat for the past five years and have forced 250,000 people to migrate toward the Turkish border. Turkey is considering targeting Tal Rifaat and Azaz in counterterrorism operations following attacks on security forces and civilians.

While President Recep Tayyip Erdoğan recently urged Russia to ensure the YPG/PKK terrorists withdraw from the area as part of a previous deal, he told a recent Cabinet meeting that Turkey would take the “necessary steps” in Syria. Turkish officials note that Moscow has failed to follow through on its promises to control the YPG/PKK in Syria, with the terrorist organization staging several attacks in the safe zones the SNA has formed with the support of Turkey.

The YPG, which occupies roughly a third of Syria's territory with the support of the United States, frequently targets Azaz, Marea, Al-Bab, Jarablus, Afrin, Tal Abyad and Ras al-Ain in the north of the country with heavy weapons. In their attacks, the terrorists use advanced heavy weapons such as TOW missiles, multibarrel rocket launchers, Katyusha and Grad missiles as well as U.S. and Russian-made rocket launchers and mortars. The Tal Rifaat area of Aleppo, located 18 kilometers (11 miles) from the Turkish border, stands out during these attacks.

The YPG/PKK, which captured Tal Rifaat in February 2016 with Russian air support, is attacking Turkish security forces and opposition fighters' positions that are providing security to settlements in the Operation Euphrates Shield and Operation Olive Branch regions. The most attacked area after Tal Rifaat is the Manbij region of Aleppo, located 30 kilometers from the Turkish border, and the Ain al-Arab district, also known as Kobani, on the border. The YPG/PKK also threatens the security of Tal Abyad and Ras al-Ain districts located in the Operation Peace Spring zone on the Syria-Turkey border.

In addition to carrying out car bombings in civilian settlements, the YPG/PKK feeds the conflict environment by attempting to infiltrate positions of the SNA on the front lines from time to time.

Turkey’s struggle in Syria will follow a different path from now on, President Erdoğan said Friday.

Speaking to reporters after Friday prayers in Istanbul, Erdoğan touched upon the recent attacks perpetrated by the YPG/PKK targeting Turkish security forces in northern Syria and Turkish border towns.

He reiterated his criticism of the U.S. and the U.S.-led coalition forces' support of the YPG in Syria.

Despite its NATO ally Turkey's major security concerns, the U.S. views the YPG as a key ally in the fight against Daesh in northeast Syria. Russia also has forces in the area to support the Assad regime.

Turkey will do all that is necessary to protect its rights and interests against attacks carried out by the YPG/PKK from northern Syria, Defense Minister Hulusi Akar said Thursday.

Foreign Minister Mevlüt Çavuşoğlu also said Wednesday that the U.S. and Russia are responsible in part for the attacks carried out in northern Syria by the YPG/PKK, adding that the two countries did not keep their promises.

Turkey is preparing for a new possible military operation against the YPG/PKK in northern Syria if talks on the issue with the U.S. and Russia fail, two Turkish officials also told Reuters recently.

"It is essential that the areas, notably the Tal Rifaat region from which attacks are constantly carried out against us, are cleared," one senior official told Reuters.

"The decision for this has been taken and the necessary coordination will be done with particular countries. This subject will be discussed with Russia and the U.S.," he added.

Another official said the YPG/PKK must be pushed back at least 30 kilometers, noting Russia was completely in control of the areas from which the recent attacks had come, along with some Iranian elements.