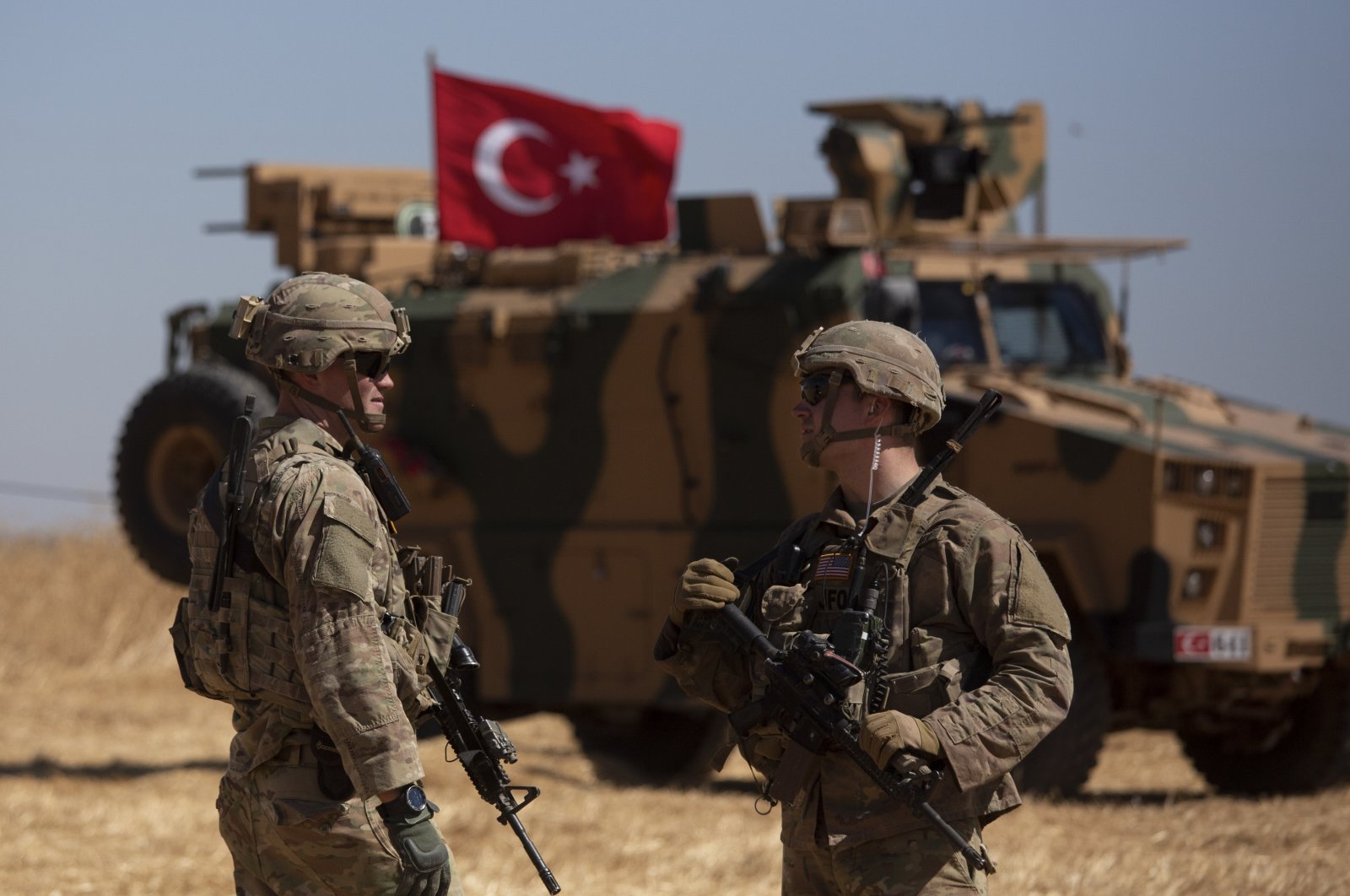 Soldiers stand near a Turkish armored vehicle during the first American-Turkish joint patrol in the so-called "safe zone" on the Syrian side of the border with Turkey near Tal Abyad, Syria, Sept. 8, 2019. (AP File Photo)
by DAILY SABAH Nov 30, 2021 11:18 am
RECOMMENDED

The Turkish military dug a 230-kilometer (143-mile) trench along the critical M4 highway traveling through Syria's Ras al-Ain and Tal Abyad regions in the face of growing terrorist attacks and infiltration attempts by the PKK’s Syrian offshoot, the YPG.

The ditch is 4 meters (13 feet) deep and 4 meters wide and has been dug to prevent YPG/PKK terrorists from crossing into the region, thus ensuring stability in the area north of the M4 highway.

Two Turkish police officers were killed and two others were wounded after the YPG carried out an attack in Azaz, northern Syria, according to the Interior Ministry. The YPG/PKK terrorists attacked an armored vehicle with a guided missile in the Operation Euphrates Shield area, the ministry said.

Locals living in areas held by the YPG have long suffered from its atrocities, as the terrorist organization has a notorious record of human rights abuses, ranging from kidnappings, recruitment of child soldiers, torture, ethnic cleansing and forced displacement.

The terrorist group increased its oppression ahead of Turkey's cross-border operation, planting explosives and converting many schools and other public buildings into military bases, with some even hosting tunnels for terrorists to hide in and escape.

After liberating the town from the YPG last year, Turkey rolled up its sleeves to launch a normalization period in Tal Abyad, which borders the Akçakale district of southeastern Turkey’s Şanlıurfa.

Ras al-Ain was similarly liberated during the operation. However, the YPG/PKK terrorists continue attacks in Ras al-Ain and the nearby city of Tal Abyad despite pulling out of areas under a deal reached by Turkey and the U.S. on Oct. 17, 2019.

In September, the Turkish military deployed more troops on the M4 highway.

Turkish soldiers are currently stationed in the region to protect the local population and support counterterrorism groups. Despite the military escalation, Ankara has also been keeping diplomatic channels active with Russia in the hope of finding a political solution, urging the country to uphold the peace agreements and ensure an immediate cease-fire.