US condemns YPG/PKK attacks in Syria without citing terrorists 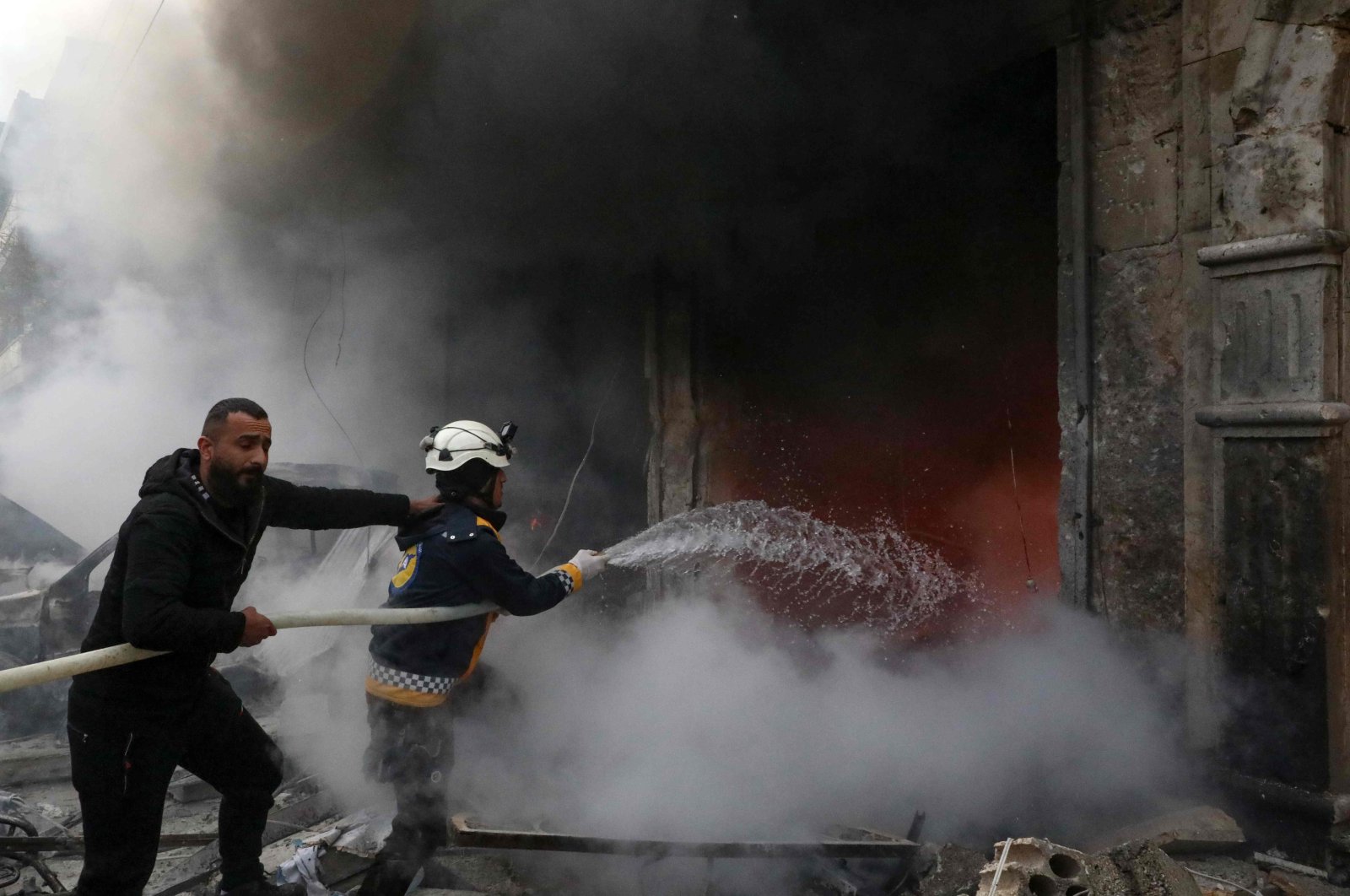 Rescue workers extinguish a fire caused by a suspected YPG terrorist attack in the town of Azaz in the opposition-controlled northern countryside of Syria's Aleppo province, Jan. 31, 2021. (AFP Photo)
by Daily Sabah with AA Feb 02, 2021 9:42 am
Edited By Nurbanu Tanrıkulu Kızıl
RECOMMENDED

The United States condemned a trio of terrorist attacks suspected to have been carried out by PKK's Syrian offshoot YPG terrorists in northern Syria that killed at least 20 civilians, including women and children, over the weekend. Washington failed to make any reference to the terrorists or review its relations with the group, however, despite the fact that local security forces have blamed the YPG for the deadly assaults.

"The United States condemns the terrorist attacks this past weekend in Azaz, al-Bab and Afrin that resulted in the deaths of at least 20 civilians, including children," said State Department Spokesperson Ned Price in a statement on Monday, without referring to the terrorist group.

At least six people were killed and more than 20 others wounded when an explosive-laden vehicle blew up at an industrial site in Afrin on Saturday.

No group has claimed responsibility for the attack, but local security personnel blamed the YPG terror group.

On Sunday, 10 people were killed and 24 others wounded in terrorist attacks in the northern towns of al-Bab and Azaz.

"The United States is deeply alarmed by the frequency of such attacks in recent months, including the repeated use of vehicle-borne improvised explosive devices," said the statement.

"Those responsible for perpetrating the violence should be brought to justice. Their actions endanger the Syrian people and threaten to destabilize the region further," it added, even as the U.S. openly supports and previously provided assistance to the terrorist group despite Turkey's opposition.

According to local security sources, YPG terrorists continue to carry out attacks but do not claim responsibility if civilians are harmed.

The U.S. support for the YPG in Syria has become a point of contention in bilateral ties between Turkey and the U.S.

The U.S. primarily partnered with the YPG in northeastern Syria in its fight against the Daesh terrorist group. On the other hand, Turkey strongly opposed the YPG's presence in northern Syria, which has been a major sticking point in strained Turkey-U.S. relations. Ankara has long objected to the U.S.' support for the YPG, a group that poses a threat to Turkey and terrorizes local people, destroying their homes and forcing them to flee.

Turkey launched Operation Peace Spring in 2019 to eliminate YPG terrorists from northern Syria east of the Euphrates in order to secure Turkey's borders, aid in the safe return of Syrian refugees and ensure Syria's territorial integrity. The operation, conducted in line with the country's right to self-defense borne out of international law and U.N. Security Council resolutions, aimed to establish a terror-free safe zone for the return of Syrians in the area east of the Euphrates, which was controlled by the U.S.-backed YPG terrorists at the time.

Turkey has long pointed to the PKK's tactic of changing names as a way of offsetting international denunciation against the group.

The PKK, which is listed as a terrorist organization by Turkey, the U.S. and the European Union, has waged a terror campaign against Turkey for more than four decades and has been responsible for the deaths of nearly 40,000 people, including women and children.

Locals in YPG-controlled areas have long suffered from its atrocities. The terrorist organization has a lengthy record of human rights abuses, ranging from kidnappings, recruiting child soldiers, torture, ethnic cleansing and being responsible for the forced displacement in Syria.