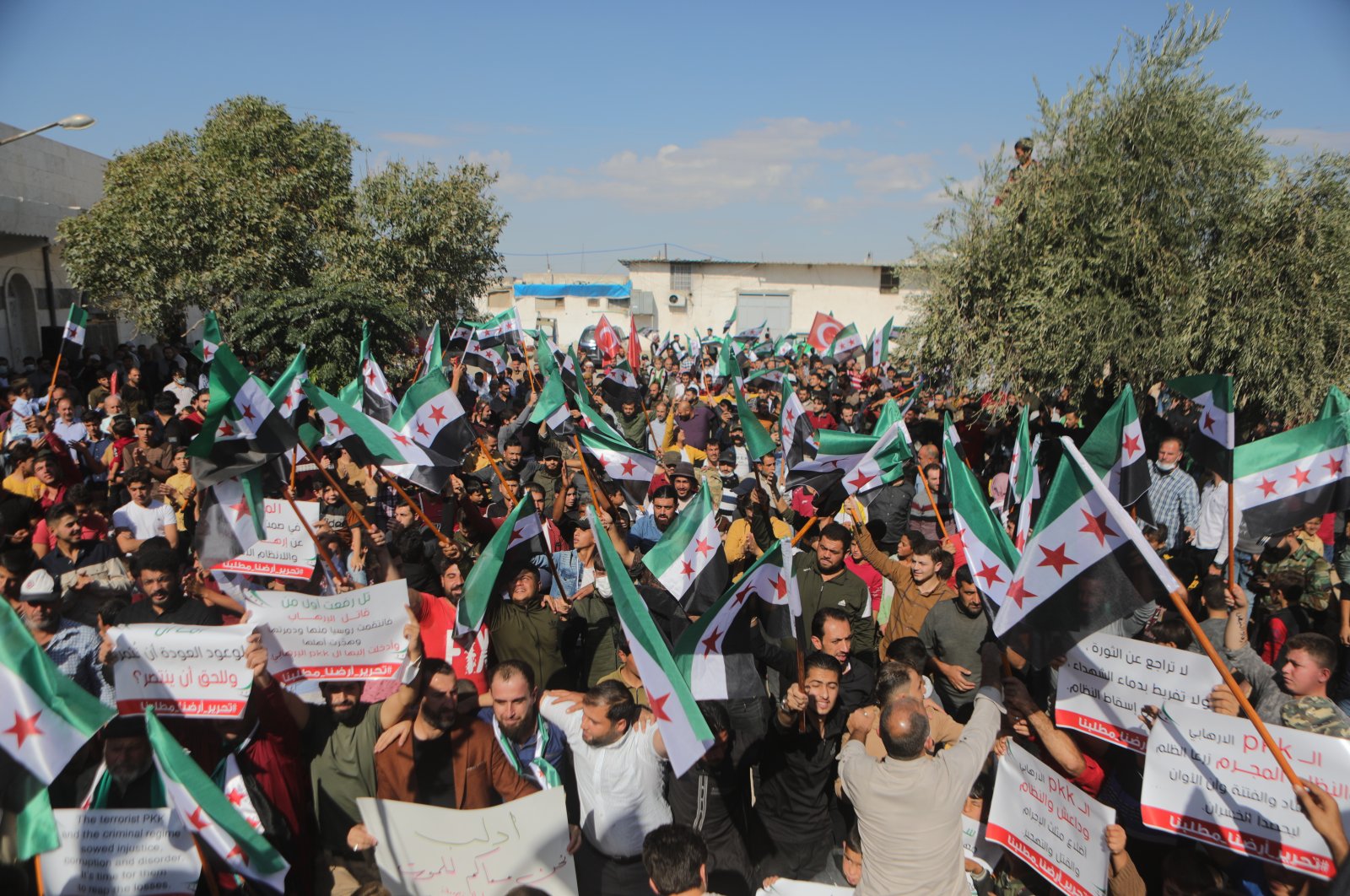 The United States and its partner YPG, the Syrian branch of the PKK terrorist group, have formed a new border force by deploying thousands of Arab elements on the Syrian-Iraqi border. Local sources also reported that the YPG has begun a campaign of forced conscription of young people in areas under its control, ahead of a potential Turkish military operation against the group in northern Syria.

The U.S. Central Command (CENTCOM) put into practice its plans to establish border guard units in Syria in late 2017 on the grounds of "preventing the revival of Daesh," but the plan could not be implemented due to Turkey's diplomatic and military pressure.

Turkey's Operation Olive Branch in January 2018 and Operation Peace Spring in October 2019 disrupted the plans of the U.S. military.

According to the information obtained by Anadolu Agency (AA) through field research, in March, at the request of the U.S., the YPG started a new restructuring process east of the Euphrates, which will include a small number of Kurdish elements but will consist mostly of Arabs.

The organization's detention of many Arabs under the name of "conscription" caused reactions in Manbij and Raqqa in June. The YPG opened fire on civilians, causing deaths. When the events escalated, the organization took a step back and suspended the practice.

The U.S. followed two separate branches for the structuring on the Iraqi border and designed the borderline by considering the administrative borders of Hassakeh and Deir el-Zour provinces.

The U.S., which gave the Hassakeh line to the Senadid group, the extension of the Carba tribe working with the organization, gave the Deir el-Zour line to the Shammar tribe.

In mid-July, American commanders brought together the terrorist Ferhat Abdi Şahin, whom they called the "SDF general commander," with Yaver Dehham, one of the Senadid group's officers, in Hassakeh.

At the meeting, plans were discussed to recruit thousands of people for a salary to be deployed on the Syrian-Iraqi border.

In mid-August, applications for the border force began to be collected in the different regions of Hassakeh.

The U.S. made an agreement with the Shammar tribe for the border line that coincides with the territory of Deir el-Zour.

Approximately 7,000 of the applications made to enter the structure established under YPG forces were accepted.

A monthly salary of 820,000 Syrian lira ($230) was granted to those whose applications were accepted.

After about two weeks of accelerated armed training, thousands of Arabs were deployed on Syria's Iraqi border about three weeks ago.

American commanders and YPG/PKK members continue to conduct investigations in Deir el-Zour for points where they can place new elements.

While the U.S. military is funding and supporting the deployment of thousands of Arab fighters to strengthen the YPG presence on the Iraqi border, some question whether it will pursue a similar plan for the Turkish border.

On Jan.14, 2018, the International Coalition Against Daesh announced that it was forming a border guard force with more Kurds in northern Syria and more Arabs on the Iraqi border. President Recep Tayyip Erdoğan, in his speech on Jan. 15 for the new structure announced, said, "America has confessed that it has established a terrorist army along the borders of our country. Our task is to strangle this terrorist army before it is even born." Five days later, Operation Olive Branch was launched.

The YPG has begun a campaign of forced conscription of young people in areas under their control, ahead of potential Turkish military operation against them in northern Syria, Arabi21 also reported on Monday.

The YPG reportedly issued a circular that states the recruitment campaign's compulsory conscription will require men as young as 18 years old to join them. The U.S.-backed terrorists, who control most of northeastern Syria, have also reportedly deployed checkpoints inside Syrian cities, where many young men have been arrested and sent to training camps in the Hassakeh countryside, local sources told Arabi21.

Turkey is preparing for a new possible military operation against the YPG in northern Syria if talks on the issue with the U.S. and Russia fail, Turkish officials told Reuters recently.

President Erdoğan also said Ankara was determined to eliminate threats originating in northern Syria and that a YPG terrorist attack that killed two Turkish police officers was "the final straw."

The PKK is designated a terrorist organization by the U.S., Turkey and the EU, and Washington's support for its Syrian affiliate has been a major strain on bilateral relations with Ankara. The U.S. has primarily partnered with the YPG in northern Syria in the fight against the Daesh terrorist group. Turkey strongly opposes the YPG's presence in northern Syria, which has been a major sticking point in strained Ankara-Washington relations. The U.S. has provided military training and thousands of truckloads of weaponry to the YPG, despite its NATO ally's security concerns.

A United Nations report stated that the YPG/PKK has been recruiting children to fight among its ranks, adding that the organization has enlisted at least 400 children in the past two years.

The recruitment and use of large numbers of children were attributed to the YPG and its components, representing 35% of all verified cases, the U.N. said.

Though the PKK/YPG initially signed a pledge with Geneva Call – a Swiss humanitarian organization that works to "protect civilians in armed conflict" – to stop the recruitment of children in 2014, its use of children has only increased since then.