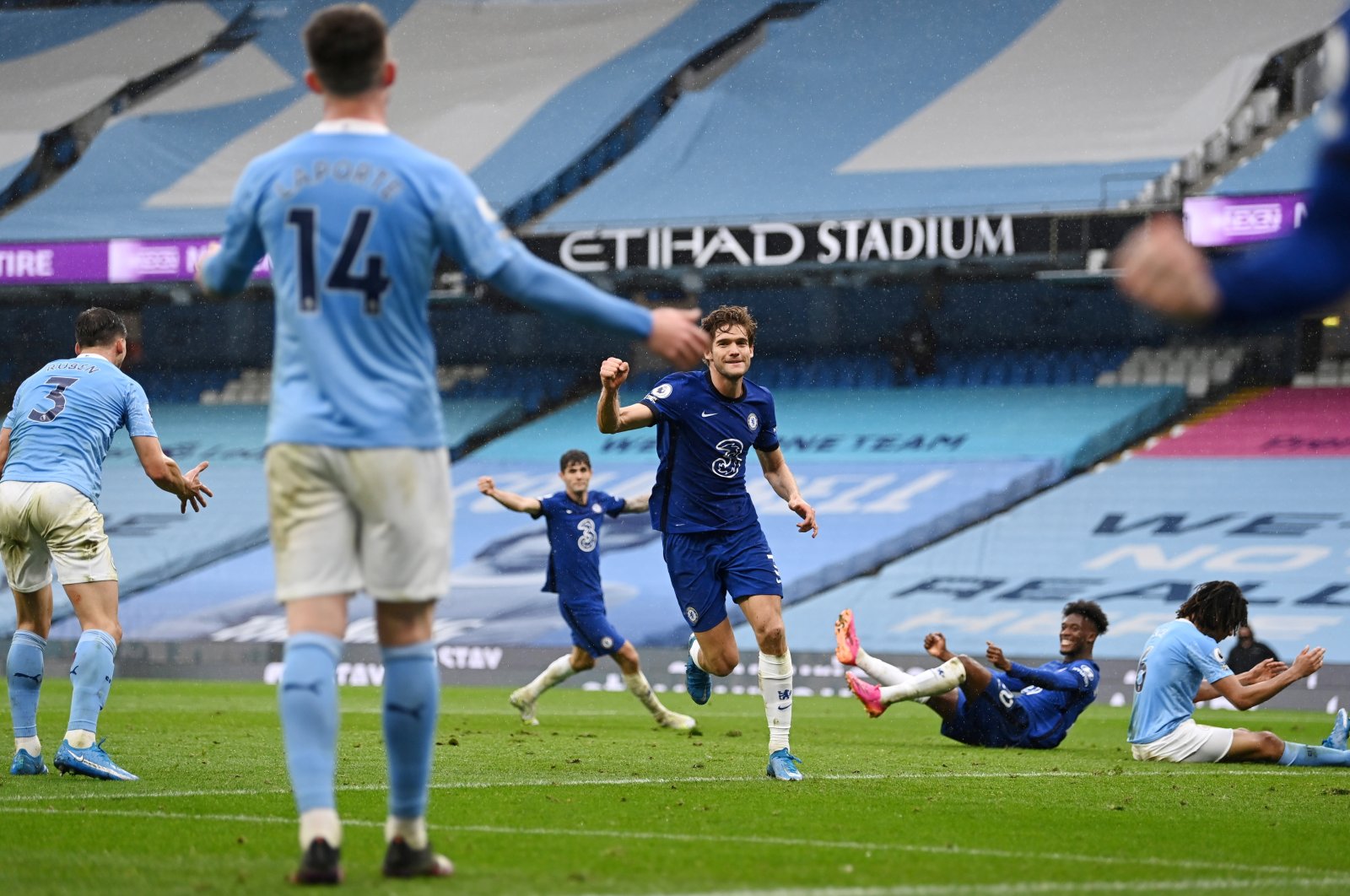 Chelsea's Marcos Alonso celebrates scoring a goal against Manchester City at the Etihad Stadium, Manchester, Britain, May 8, 2021.
by REUTERS May 09, 2021 2:19 pm
RECOMMENDED

Chelsea delayed Manchester City's Premier League title celebrations after picking up a shock 2-1 win against the to-be champions on Saturday.

City, who made nine changes for the game, could still secure the title this weekend if second-placed Manchester United loses at Aston Villa on Sunday.

With three games left to play, Pep Guardiola's side is 13 points ahead of United, who has five games remaining.

United has three games coming up in five days, and even if it wins all three City would win the title by beating Newcastle on Friday.

Saturday's game also offered something of a preview of the Champions League final between the two sides, although both Guardiola and Thomas Tuchel left out key players.

Raheem Sterling put City ahead in the 44th minute, sneaking in front of Sergio Aguero to connect with a low ball from Gabriel Jesus, who had bustled past Andreas Christensen.

Within two minutes it had a chance to double that lead from the penalty spot, but Aguero's soft chip down the middle ended in embarrassment as it was easily saved by Edouard Mendy.

Chelsea drew level through a low drive from Hakim Ziyech in the 63rd minute, and then had efforts from Timo Werner and Callum Hudson-Odoi ruled out for offside.

City felt it should have had another penalty when Sterling went down in the box with Kurt Zouma behind him.

But Tuchel's team went on to grab a late winner through with Marcos Alonso's scuffed shot floating past Ederson.

Chelsea beat City in the semifinal of the FA Cup on April 17 and will face them again in May 29th's Champions League final.

Meanwhile, Sadio Mane's first-half header and a late effort by Thiago earned Liverpool an unconvincing 2-0 win at home to Southampton, keeping Juergen Klopp's side in the hunt for a top-four finish.

Liverpool was far from its best and keeper Alisson saved them on several occasions. But the win moved them into the sixth spot with 57 points from 34 games, six points behind fourth-placed Leicester City with a game in hand.

Mane got on the end of Mohamed Salah's flighted pass into the area in the 31st minute, seconds after Southampton's Che Adams had been denied an opener for the visitors.

The three points looked far from safe until Thiago buried a low shot into the corner in the 90th minute – his first goal since joining from Bayern Munich.

Southampton remains in 16th place and, while it is not mathematically safe from relegation, it looks like hanging onto its top-flight status.

Liverpool, however, continued to look nothing like the marauding machine that took them to the title last season.

Southampton keeper Fraser Forster was kept busy with saves from Diogo Jota and Salah, but Liverpool looked uneasy whenever Southampton attacked and was lucky not to fall behind.

Nathan Teller found himself in acres of space down the right flank and surged forward before crossing low for Adams who looked certain to score before Alisson smothered his shot.

Liverpool made the most of that let-off a minute later when Salah hoisted the ball into the box and Mane headed in.

Tella wasted a chance to equalize before halftime when he headed straight at Alisson, while Adams had the ball in the net only for his effort to be disallowed for a foul.

Jota forced a sharp save by Forster after halftime while at the other end Alisson was fortunate when he cleared the ball straight to Adams, whose shot allowed the keeper to recover.

Mane had a goal disallowed but Thiago settled the issue when he threaded a shot into the corner.

"It is an amazing feeling (to score) but the most important thing is the three points. We keep fighting for a small miracle," Thiago said of Liverpool's top-four hopes.

"The window is open so we try to go through the window."