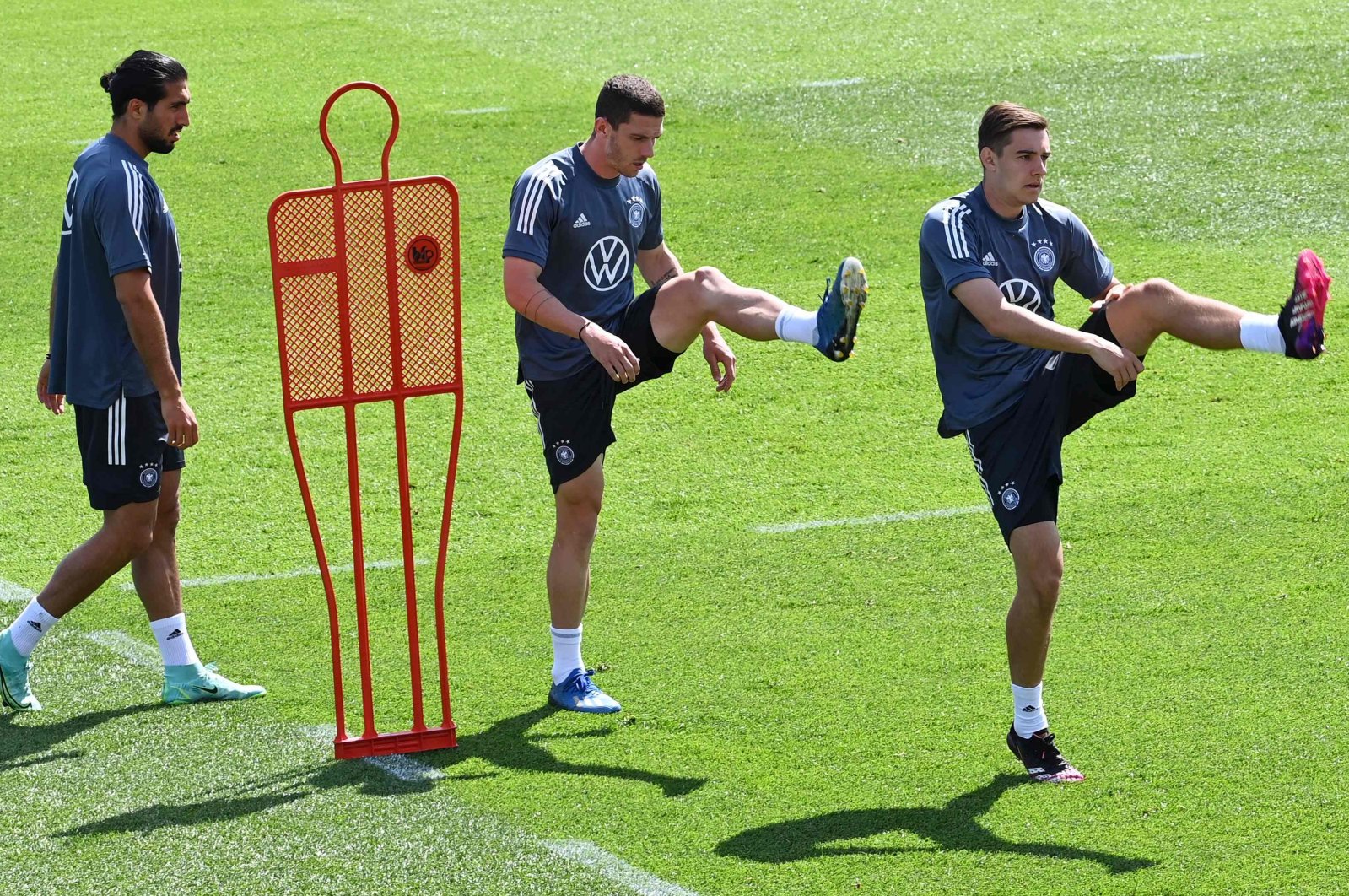 Germany faces a tough start to Euro 2020, with a match against holders Portugal four days after the France game before finishing its group campaign against Hungary

The Euro 2020 will brace for a clash of titans Tuesday as world champions France opens its Euro 2020 campaign against an embattled German side eager to rediscover itself.

Didier Deschamps' France head to Munich for the Group F game with a feud brewing between forwards Kylian Mbappe and Olivier Giroud but are still the title favorites, while the Germans are struggling and under pressure.

After 15 years in charge, coach Joachim Low will step down after the European Championship and wants to forge a mentality "like 2014" when his squad "pulled together" to win the World Cup.

The French need no reminding of Brazil, where they bowed out in the quarterfinals when a Mats Hummels header sealed victory for Germany at the Maracana Stadium in Rio de Janeiro.

The French got their revenge when Antoine Griezmann scored both goals in a 2-0 semifinal win at Euro 2016 before the hosts lost to Portugal in the final.

France won the last meeting between the neighboring countries in 2018 when Griezmann again scored both goals to seal a 2-1 Nations League win in Paris.

Germany faces a tough start to Euro 2020, with a match against holders Portugal four days after the France game before finishing its group campaign against Hungary.

Tension is already bubbling in the French squad after Giroud, who scored twice off the bench in a 3-0 friendly warm-up win over Bulgaria, complained about the passes he received, which Mbappe took to heart.

It promises to be a heated match after Chelsea defender Antonio Rudiger admitted Germany may need to be a "little dirty" to counter the French attack.

"Germany have good, young players and I don't believe they are as weak as they were," said France's Bayern Munich defender Benjamin Pavard.

Low, 61, is desperate to land Germany a record fourth European title and enhance his reputation, dented after his side failed to get out of the 2018 World Cup group.

Three years after that debacle in Russia, Low must hope his shaky defense can cope with France, who could name a fearsome front three of Mbappe, Griezmann and the recalled Karim Benzema.

The Germans are expected to play with a 3-5-2 formation in an attempt to counter France's obvious threat.

Low has assured fans that his players will wear the shirt "with pride."

"(We will) have to go through hell and be capable of suffering if we want to achieve something. We will give everything," he said.

Germany reached at least the semifinals of every major tournament from the 2006 World Cup to Euro 2016, but the last three years have been bleak.

After the World Cup disaster, it finished bottom of its 2018-19 Nations League group, was thrashed 6-0 by Spain last November and slumped to a 2-1 home defeat by minnows North Macedonia in World Cup qualifying in March.

"The blows of the last three years have left their mark," admitted centre back Hummels, who along with Thomas Mueller has been recalled after Loew reversed his 2019 decision to ax the pair.

Bayern's Joshua Kimmich says the team are seeking redemption from their own fans.

"We have only disappointed people over the last few years," he conceded. "We can't always hide and say that we have a lot of quality. Now it's up to us."

In the other match Tuesday, Portugal will look to beat hosts Hungary to get a head start on Germany and France in a bruising Group F.

However, the holders will have to overcome a wall of noise made by 67,000 locals to make a statement of intent.

Hungary, playing in only its second European Championship in 49 years, is rank outsiders in the tournament's toughest group but will compensate for what it lacks in star power with passion and grit.

The shiny new Puskas Arena is the only Euro 2020 stadium, which will be at full capacity after local authorities agreed to exchange social distancing for a strict entry policy, requiring fans to return a negative COVID-19 test to gain access.

It means the likes of Cristiano Ronaldo and Bruno Fernandes face the prospect of their every touch being booed in Tuesday's fixture by the Budapest crowd, who will not forgive any slacking off from their side.

"They (Hungary) are a very tough team and won't let any ball go and will never give up," said Portugal midfielder Danilo.

"We know what style of play to expect from them and we'll be preparing well over the next few days to make sure we're not in for a surprise."

"We spent a season without playing in front of fans and we're not used to it anymore but having a crowd will make the game more exciting. Hungary will be extra motivated but it's just another problem we'll have to deal with."

Leaving aside the partisan crowd, Portugal is likely to face tougher tests from Germany and France and the fixture is a golden chance to clock up some early goals and points to help its push to qualify from the group.

Portugal did face a torrid time from Hungary at Euro 2016, falling behind three times before coming back to earn a 3-3 draw and scrape into the knockout stages.

Fernando Santos' Portugal side is an even stronger proposition five years on, possessing an embarrassment of attacking riches with the likes of Diogo Jota, Andre Silva, Joao Felix and Fernandes, as well as the ever-determined Ronaldo.

"This is a different group, we have many young players embarking on their first major international tournament although our ambition and hunger will be the same as in Euro 2016," added 29-year-old Danilo.

"The previous team was very cohesive as they had been playing together for a long time while we are a young team of emerging talents but we are also a united group. We all think the same and want to win."

Hungary, meanwhile, is a less potent side than the one which reached the knockout stage last time around, with big personalities such as Gabor Kiraly, Roland Juhasz and Zoltan Gera all moving on.

They are also without two key midfielders in bright young hope Dominik Szoboszlai and Zsolt Kalmar due to injury.