Coach Koeman’s future on the line as Barcelona faces Atletico 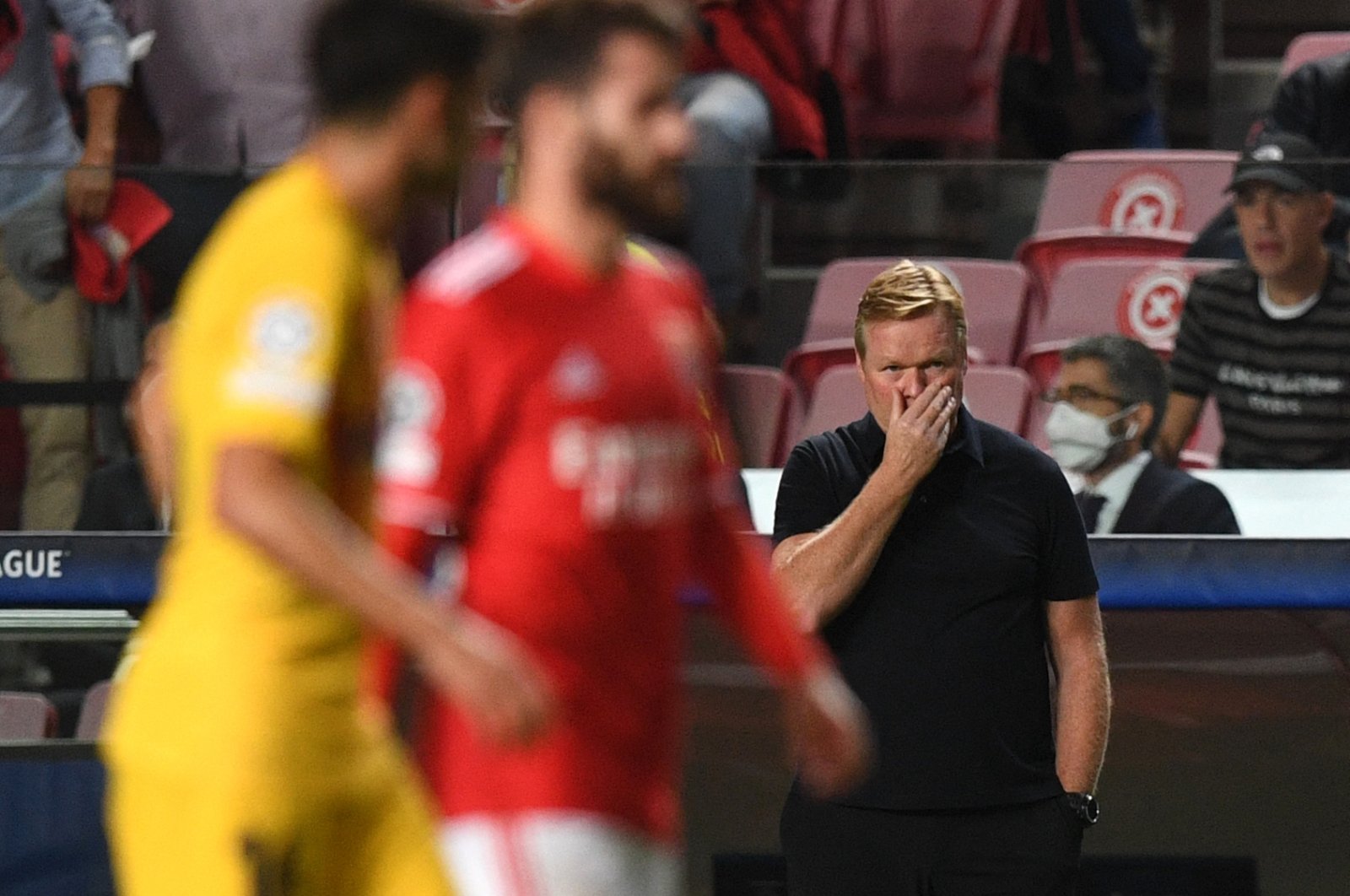 Barcelona coach Ronald Koeman reacts during a Champions League match against Benfica at the Luz stadium, in Lisbon, Portugal, Sept. 29, 2021. (AFP Photo)
by Agencies
Oct 01, 2021 11:12 am

The troubled La Liga giant Barcelona visits Atletico Madrid on Saturday in what could be the final match for its troubled coach Ronald Koeman, while Atletico Madrid striker Antoine Griezmann will hope to catch a lucky break for his resurgence.

Only the schedule is on Koeman's side now, as it might already be too late for the Dutch coach with the international break next week dictating that it makes more sense for Barcelona to change coach after its trip to the Wanda Metropolitano than before.

The 3-0 defeat by Benfica in the Champions League on Wednesday left Koeman's team at the bottom of Group E and struggling to make the knock-out stages.

“As for my future, I cannot say anything because I don’t know what the club thinks about it,” Koeman was quoted as saying after the Benfica match by the Associated Press (AP). "It is not in my hands. We will see ... at the end, the guilty party is the coach.”

In La Liga, Barcelona sits sixth, although their position could be more easily rectified, given it is only five points adrift of leader Real Madrid, with a game in hand.

Few, though, appear ready to give Koeman time to make amends for what has been a miserable start to the season, full of disappointing results and worse performances.

Koeman's performances in public have fueled the fire as well, a feud with club president Joan Laporta in recent weeks adding to the sense that his time at Camp Nou is running out.

A two-match suspension means Koeman will not be on the touchline on Saturday for what could be his final game in charge and his best hope of being retained is perhaps that Laporta fails to land a successor.

In the summer, Laporta told Koeman he would need two weeks to find a possible successor but none were found, or at least convinced that this Barcelona is now a club worth joining.

Xavi Hernandez, Roberto Martinez and Andrea Pirlo are the names at the top of Laporta's shortlist.

Whether Barca's players are motivated or deflated by a potentially imminent change remains to be seen, although it has been notable this week how little backing Koeman has received.

Gerard Pique, Sergio Busquets and Frenkie de Jong were all given the opportunity to support the Dutchman but only De Jong came close, answering "no" when asked if sacking Koeman would change anything, according to Agence France-Presse (AFP).

And in turn, Koeman didn’t shy away from spreading some of the blame on his players after Wednesday’s match.

"The team is not the same as it was for years. We saw that in today’s game. It is crystal clear. We have lost players who made the difference ... I am not saying that we have to accept it or that I have no responsibility, but in today’s game we should have gotten more from our players,” he said.

Koeman's regular appeals for observers to be "realistic" have gone increasingly unheard, despite attempts to highlight the club's financial meltdown, a string of summer sales and several injuries as reasons for reducing expectations.

Griezmann was among those let go, his two-year boomerang from Atletico to Barcelona and back to Atletico one of the clearest demonstrations of the reckless, short-term thinking at Camp Nou.

Atletico has been the chief beneficiary financially, given it stands to pocket 80 million euros ($92.6 million) from the to-and-fro, having already won La Liga while the Frenchman was away.

But Griezmann has struggled to readapt to his old team, a dreadful run of form finally alleviated by a superb goal against AC Milan in the Champions League on Wednesday, which instigated a 2-1 win.

After Griezmann failed to muster a goal, assist or even a shot on target in his first five matches, Diego Simeone appeared to be running out of patience too, with Angel Correa starting alongside Suarez at the San Siro.

Griezmann came on in the 61st minute and scored in the 83rd, volleying in brilliantly from Renan Lodi's cross, and the hope will be that with confidence he can find a role now in the line-up of the reigning champion.

Atletico is only two points ahead of Barcelona after a slip-up of its own last week against Alaves, who had lost all five of its previous matches.

Real Madrid is the early frontrunner but there are doubts there too, following Wednesday's shock 2-1 loss at home to Sheriff in the Champions League.

Madrid plays away at Espanyol on Sunday while Real Sociedad in second will look to continue its excellent start with a win at Getafe. Sevilla, in third, travels to Granada, in 17th.