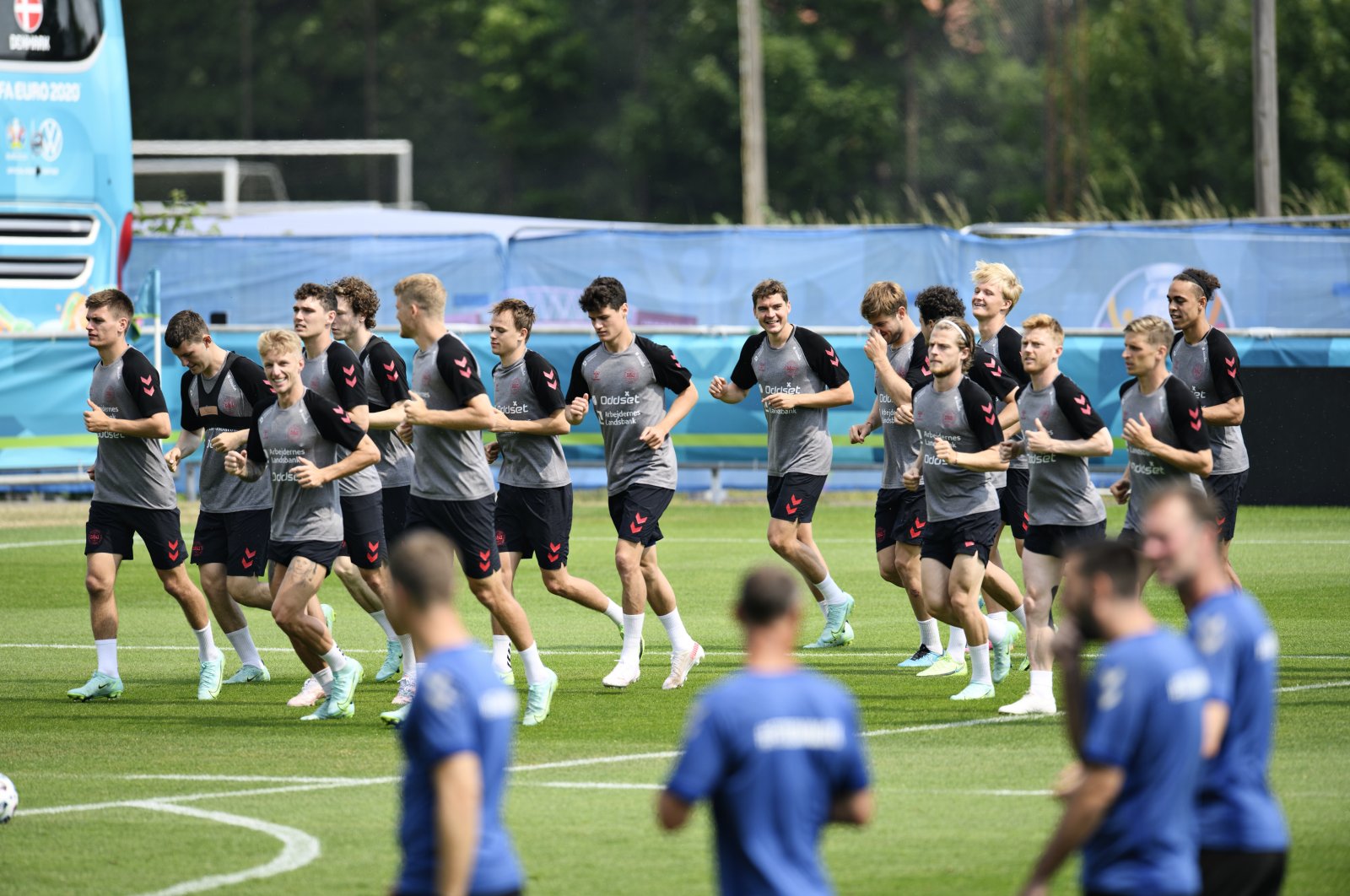 Hosts Denmark will face Russia in a must-win Euro 2020 tie as it looks determined to squeeze into the knockout stages with a win in its final Group B match Monday.

Despite losing 2-1 to a Belgian side aided by the return of Kevin de Bruyne, a flood of supportive messages for Christian Eriksen and the catharsis of Yussuf Poulsen's early goal against the world's top side seemed to put the trauma behind it.

Manager Kasper Hjulmand pledged that Denmark, who will benefit from home advantage against Russia in Copenhagen, would beat Stanislav Cherchesov's side for Eriksen after he underwent an operation to implant a heart-starter device.

The Danish midfielder was discharged from the hospital on Friday, six days after collapsing during his side's match against Finland.

Meanwhile, Despite so far playing on home turf in St. Petersburg, Russia has failed to rekindle the magic of its quarterfinal run at the 2018 World Cup in matches that have highlighted a porous defense and a lukewarm attack.

Russia has not reached the knockout stage of a European championship since 2008. Its 1-0 victory against surprise qualifiers Finland on Wednesday was its first win since the opening match at the 2012 tournament.

Denmark, last in Group B with two losses, hopes to capitalize early on defensive lapses by Russia, with Mikkel Damsgaard filling in for Eriksen and forward Martin Braithwaite showing touches of quality against Belgium.

"We're going to get through the group stage," Braithwaite said after the loss to Belgium. "With this team, there are no limits."

To grab the second qualifying spot, Denmark is also relying on Belgium, who have already advanced, to beat Finland on Monday.

A Russian win against Denmark, meanwhile, would guarantee it a spot in the knockout stage.

Dzyuba, a towering striker who is one goal away from tying Alexander Kerzhakov's national team record of 30, has been scoreless in the tournament so far.

Against Denmark, Cherchesov could start Alexei Miranchuk, one of the few Russians who play in a top European league. The Atalanta midfielder, who came on in the 63rd minute against Belgium, scored Russia's goal against Finland.

Fins draw hope from past

Finland faces a daunting challenge against the world's top-ranked team Belgium to qualify for the Euro 2020 knockouts in its maiden tournament, but coach Markku Kanerva is taking inspiration from his side's ability to surprise the top nations.

"A draw will probably be enough to qualify," he said of the final Group B game in St. Petersburg on Monday for Finland, who sits on three points after an opening win against Denmark.

"When I started as head coach in the Finnish team one of the first matches was a friendly against Belgium and we managed a draw," he added at a news conference on Sunday, recalling a 1-1 result in 2016.

Kanerva called Monday's game – taking place at the same time as Denmark meet Russia in Copenhagen – the biggest ever for Finland, who sit 53 places below Belgium in the FIFA rankings.

"We still have a chance to win the group – it's completely in our own hands," he said.

"The most important part of our task is to focus on the part we can actually control, and that is our own game. We have our colleagues who will keep us informed about the situation between Russia and Denmark, but hopefully, we won't need that information."

After beating the Danes, the Finns then lost to Russia but they believe other past heroics such as a 2-0 friendly win over France in November will help them against Belgium.

"It is great that we have a chance to face the two best teams in the world. Although it was a friendly, the France game gave us an idea of how we can do well against the best teams," Kanerva said.

"Now we are facing the number one in the FIFA world ranking, the experience with France gives us the idea that we can beat big teams."

The Finns are third in Group B behind Belgium and Russia. The top two go through to the knockout stage, along with the four best third-place finishers from the six groups.

Austria is not considering the option of a draw in its last Euro 2020 Group C game against Ukraine, a result that may help both teams but that would only dredge up memories of their 1982 "Disgrace of Gijon."

That World Cup game in Spain – a 1-0 win for what was then West Germany – was enough to send both Austria and their neighbors through at the expense of an entertaining Algeria.

An early Germany goal was followed by a soulless kickabout, neither team wanting to score, in a match also mockingly known as the "Gijon Non-Aggression Pact."

On Monday both Ukraine, who only need a point for second place, and Austria, as one of the four best third-placed teams, could advance with a draw.

Both teams are currently on three points, while the Netherlands are already through with six, while North Macedonia has yet to open its account after losing both of its games.

The top two in each of the six groups proceed to the round of 16 along with the four best third-placed finishers.

"I do not think that it comes down to that," said Austrian Football Association president Leo Windtner. "In every respect, it would be the wrong tactic to go out and play for a point."

He said there would be no "historical repetitions."

"The best thing would be to not even discuss it. That is history. It does not call out for repetition," he said.

The Austrians, who had never won a game at the Euros before its opening 3-1 win over North Macedonia, then lost 2-0 to the Dutch.

"We will try to decide this game in our favor," Austria forward Sasa Kalajdzic said. "I want to win every game, and this one as well."

Austria's forwards made little impact against the Netherlands.

Striker Michael Gregoritsch, who had scored as a substitute against North Macedonia, started for Kalajdzic, but was taken off after an hour to make way for his teammate as coach Franco Foda struggled to find a solution to his misfiring front line.

With top striker Marko Arnautovic back after a one-game suspension for his verbal outburst at an opponent during his goal celebrations against North Macedonia, Foda does have more options.

But Foda will have to see if the volatile striker will prove to be the punching power on the day to carry them into the knockout stage.

The Netherlands are still pondering their approach to their last European Championship group game against North Macedonia in Amsterdam on Monday, with both personnel and tactics under review as they look ahead to the knockout stages next weekend.

The Dutch took just two games – home wins over Ukraine and Austria – to make sure of top place in Group C and have booked a last-16 clash in Budapest next Sunday against one of the best third-placed finishers.

That means coach Frank de Boer has the luxury of resting players and switching tactics in Monday’s clash at the Johan Cruyff Arena – but the choice is proving to be a dilemma.

North Macedonia, in the meantime, will be seeking to exit the Euro 2020 stage with its heads held high.

Two defeats mean it is eliminated, unable to secure a top-three finish even if it pulls off an upset victory.

Coach Igor Angelovski is likely to return Aleksandar Trajkovski to the starting line-up after the forward, who was below par in the opening 3-1 loss to Austria, reinvigorated the Macedonians against Ukraine as a halftime substitute.

"I honestly hope we will start against the Dutch like we played against Ukraine in the second half,” said Trajkovski. "We have nothing to lose and we’re going out there to put our hearts on our sleeves.”

For his part, De Boer is pondering a return to a traditional Dutch 4-3-3 formation after playing with a five-man defense in the last two matches. "I have certainly thought about fielding three attackers against North Macedonia. The only drawback is that they have been playing with five men at the back. I understand that you are now thinking: 'Yes, but we are the Netherlands and they are North Macedonia,' but you also want to go to the last 16 with a good feeling," he said.

There is also the dilemma over drastic changes to the line-up, allowing those who have not played yet to get some game time but then possibly losing momentum.

"I’d like to stay playing,” said Daley Blind, who started both games, weighing in on a debate that has dominated Dutch media over the last two days.

"I think everyone thinks that way. We also want to beat North Macedonia because that will be good for confidence and the spirit in the squad.”