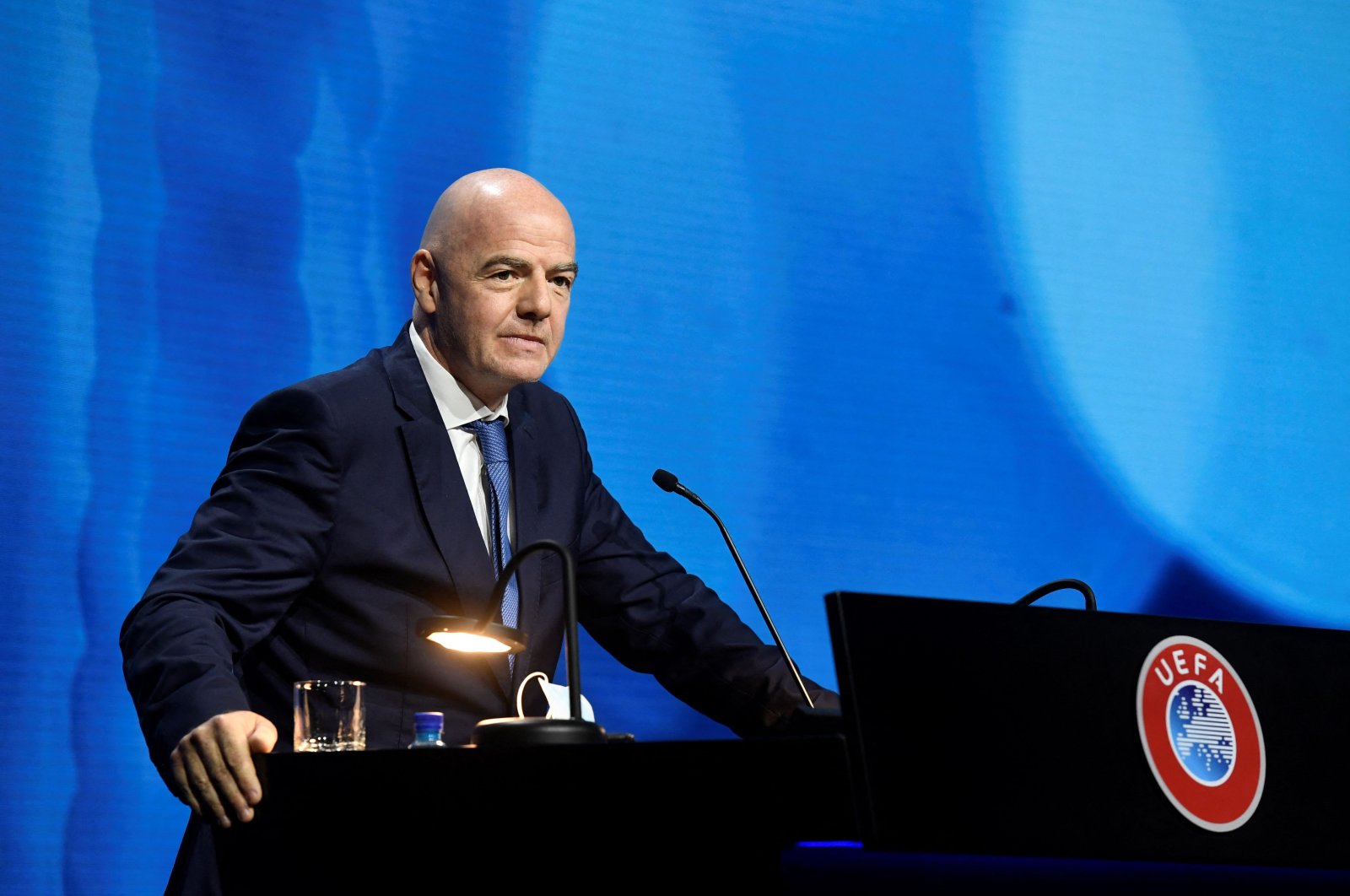 Either you're in or you're out. You can't be half in and half out. Think of it, this has to be absolutely, absolutely clear, said FIFA President Gianni Infantino

He warned that clubs involved in the European Super League could face "consequences," as the backlash grew against the deeply divisive plans.

Infantino lent his support to European football's governing body as it attempts to quash an initiative that threatens its prized Champions League and the health of domestic competitions such as England's Premier League.

“At FIFA, we can only and strongly disapprove the creation of the super league, of a super league which is a closed shop, which is a breakaway from the current institutions. No doubt whatsoever of FIFA’s disapproval. Full support to UEFA,” he said, according to The Guardian.

“It is my task and our task to protect the European sports model, club competitions, national teams. If they choose to go their own way, they must live with their choice. They are either in or out. They cannot be half in and half out. Think of it, this has to be absolutely, absolutely clear."

Twelve major clubs launched plans Monday for a new breakaway league which would drastically change the landscape of the sport.

UEFA has said the teams would be banned from domestic and other European competitions, including the Champions League.

Currently, teams have to qualify for the Champions League each year through their national competitions and face a lengthy group phase before reaching the high-profile latter stages.

The Super League would guarantee a spot for its founding members every year, removing the uncertainty of qualification and the accompanying risks to revenue.

The breakaway plan prompted a furious reaction from fans and officials, with UEFA president Aleksander Ceferin saying on Monday it was motivated by "greediness, selfishness and narcissism," and Liverpool manager Jurgen Klopp saying its closed nature was "not right."

On Tuesday, Ceferin implored club owners, particularly those of Premier League teams, to row back on the plans.

"There's still time to change your mind. Everyone makes mistakes," said the Slovenian. "English fans deserve to have you correct your mistake, they deserve respect."

Three more clubs are expected to sign up, including "at least two" from France, a source told AFP. Qatar-owned Paris Saint-Germain is a notable absentee, while Bayern Munich, the reigning European champion, has distanced themselves from the project.

Five more clubs will qualify annually for the 20-team, midweek competition, where two groups of 10 will precede two-legged quarter and semifinals and a one-off final. The competition is due for launch "as soon as is practicable."

It constitutes a serious threat to UEFA, which together with the English, Spanish and Italian football authorities said the clubs could be banned from domestic and European competition.

The British government also said it was considering invoking competition law to block the breakaway.

'Football has to change'

Backed by U.S. investment bank JP Morgan, the Super League is offering the founding clubs an initial pot of 3.5 billion euros ($4 billion) for infrastructure investment and to offset pandemic costs.

The clubs, most of them heavily indebted and saddled with enormous player salaries, are expected to receive a further 10 billion euros in "solidarity payments" over the life of the initial commitment – much more than the returns available in the Champions League.

Britain's culture secretary, Oliver Dowden, said the English clubs could find themselves subject to a formal review under British anti-trust law, which prevents the formation of monopolies or corporate cartels.

"We will put everything on the table to prevent this from happening," the minister said, vowing a "very robust response".

However, organizers of the Super League said they would file court motions to stop players being banned and "ensure the seamless establishment and operation" of the competition, according to a letter to Ceferin and Infantino that was seen by AFP.

Real Madrid president Florentino Perez, the head of the new ESL, said it was "impossible" that clubs would be thrown out of the Champions League, whose upcoming semi-finals feature Chelsea, Manchester City and Real Madrid.

"Madrid will not be kicked out of the Champions League, definitely not. Nor City, nor anyone else," he said, also insisting that players would still be able to represent their national teams.

"Football has to keep changing and adapting to the times. Football is losing interest. Something must be done," Perez said.

Liverpool midfielder James Milner became the first player of one of the clubs involved to speak openly against the project.

"I can only say my personal opinion, I don't like it and hopefully it doesn't happen," Milner said after Liverpool's Premier League draw with Leeds on Monday.

Fans of both clubs protested outside Elland Road before the match, while Leeds players wore shirts featuring the Champions League logo and the words "earn it" and "Football is for the fans" during the warm-up.

Liverpool manager Klopp was angered by Leeds staff leaving similar shirts in the away dressing room before kick-off.

The breakaway announcement came just hours before UEFA announced a new, 36-team format for the Champions League, which had been conceived to placate the continent's biggest clubs.