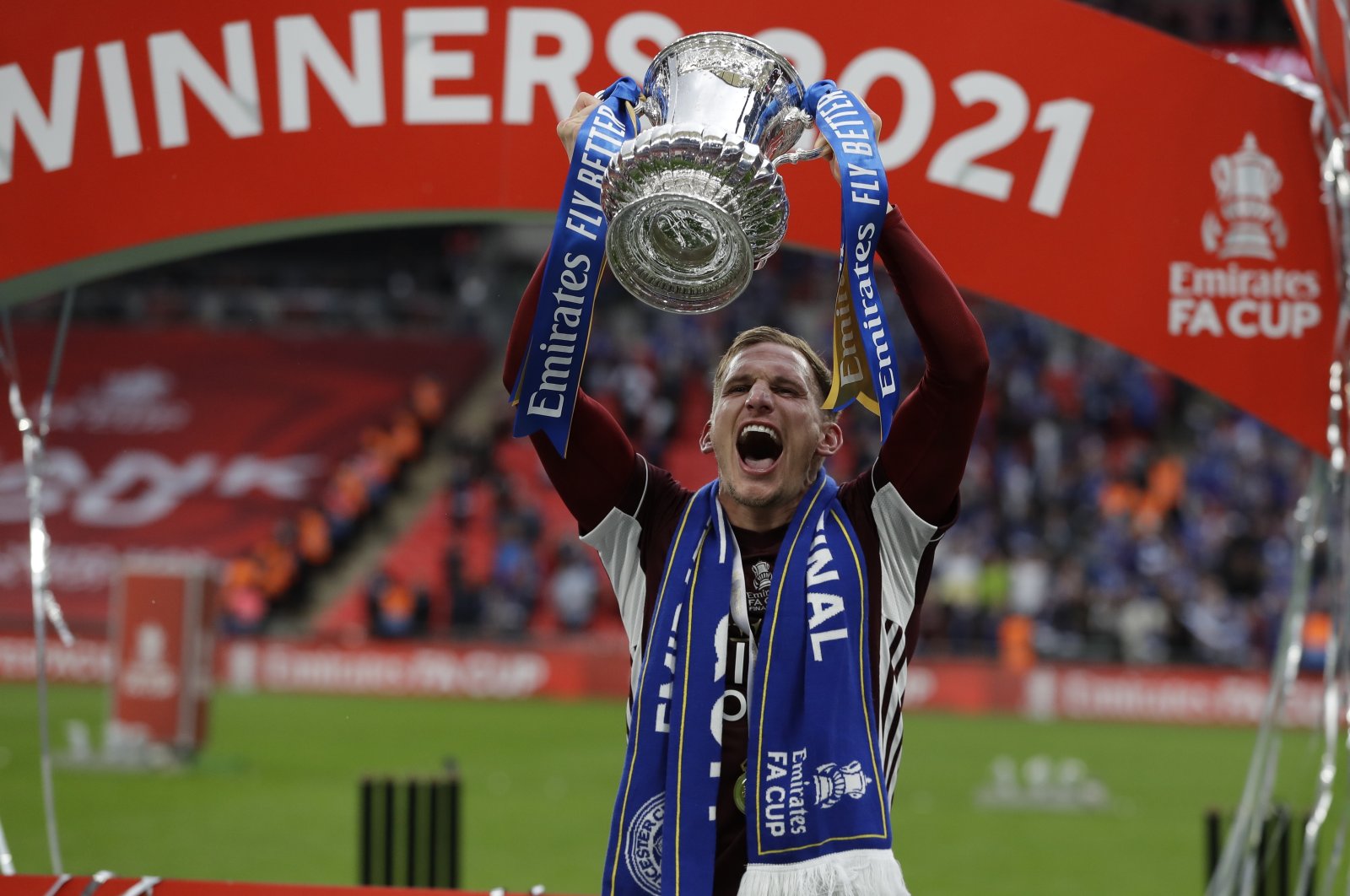 Leicester's Marc Albrighton celebrates with the trophy after winning the English FA Cup final between Chelsea FC and Leicester City at the Wembley Stadium in London, Britain, May 15, 2021. (EPA Photo)
by French Press Agency - AFP May 15, 2021 9:36 pm
RECOMMENDED

For the first time in the team's 137-year history, Leicester won the FA Cup on Saturday as Youri Tielemans's sensational strike defeated Chelsea 1-0 in front of 22,000 fans at Wembley.

The largest crowd at a sports event in England since the coronavirus pandemic hit 14 months ago was treated to a goal worthy to win any trophy as the Belgian midfielder blasted into the top corner in the 63rd minute.

Kasper Schmeichel produced a stunning save to deny Mason Mount late on and Chelsea also had a goal ruled out by a VAR review, deeming it offside.

Five years after the Foxes stunned the Premier League's giants to become champions, Leicester has now claimed English football's other prestigious trophy at the fifth time of asking.

Four times it had previously lost the final, but the last of those was 52 years ago.

A historic week for Brendan Rodgers's men could get even better as they are on the verge of sealing a place in next season's Champions League.

The sides meet again in three days' time at Stamford Bridge in a pivotal clash to decide who secures a top-four finish in the Premier League.

Chelsea needs a quick response after losing for just the fourth time in 27 games since Thomas Tuchel replaced the sacked Frank Lampard in January.

The Blues also have a Champions League final to look forward to against Manchester City in two weeks' time but could end the campaign without silverware or a place in Europe's premier club competition next season.

Chelsea's success under Tuchel has come thanks to an excellent defensive record, but its struggles at the other end were again exposed.

Tuchel's men dominated before halftime but labored to create clear-cut chances despite Leicester losing defensive lynchpin Jonny Evans to injury midway through the first half.

Timo Werner's wayward finishing has characterized his first season in England since joining from RB Leipzig for 47 million pounds ($66 million) and the German international had another day to forget in front of goal.

Tuchel turned away in disgust after Werner blazed high and wide from the edge of the box with the Leicester defense stretched midway through the first half.

Werner then came closest to breaking the deadlock before halftime as his header drifted just wide and evaded Cesar Azpilicueta as the Chelsea captain launched himself in at the far post.

The welcome return of noise echoing down from 6,000 fans of each side from both ends of the ground helped mask a general lack of quality on the field.

Another 10,000 local supporters, key workers and Football Association stakeholders were also in attendance as Wembley gears up to host Euro 2020 matches next month at 25% capacity.

One moment of magic proved decisive as Tielemans collected possession midway inside the Chelsea half and strode forward before unleashing an unstoppable strike into the top corner past Kepa Arrizabalaga.

Tuchel flexed the strength in depth of his squad in an attempt to find an equalizer as Callum Hudson-Odoi, Ben Chilwell, Kai Havertz, Olivier Giroud and Christian Pulisic were all introduced off the bench.

But they were denied by the brilliance of Schmeichel in the Leicester goal.

Chilwell, whose every touch was booed by the Leicester support, nearly came back to haunt his old club as his header was turned onto the post by the Dane.

Mount then could not believe his luck as his sweetly struck shot was turned behind by a brilliant stop from Schmeichel.

Even when the Leicester keeper was beaten, Chelsea was denied by a VAR review.

A Wes Morgan own goal looked set to send the game to extra-time, but Chilwell had strayed offside in the buildup.

Leicester players and fans celebrated the decision like a goal and were in raptures again moments later after seeing out a nervy finale.