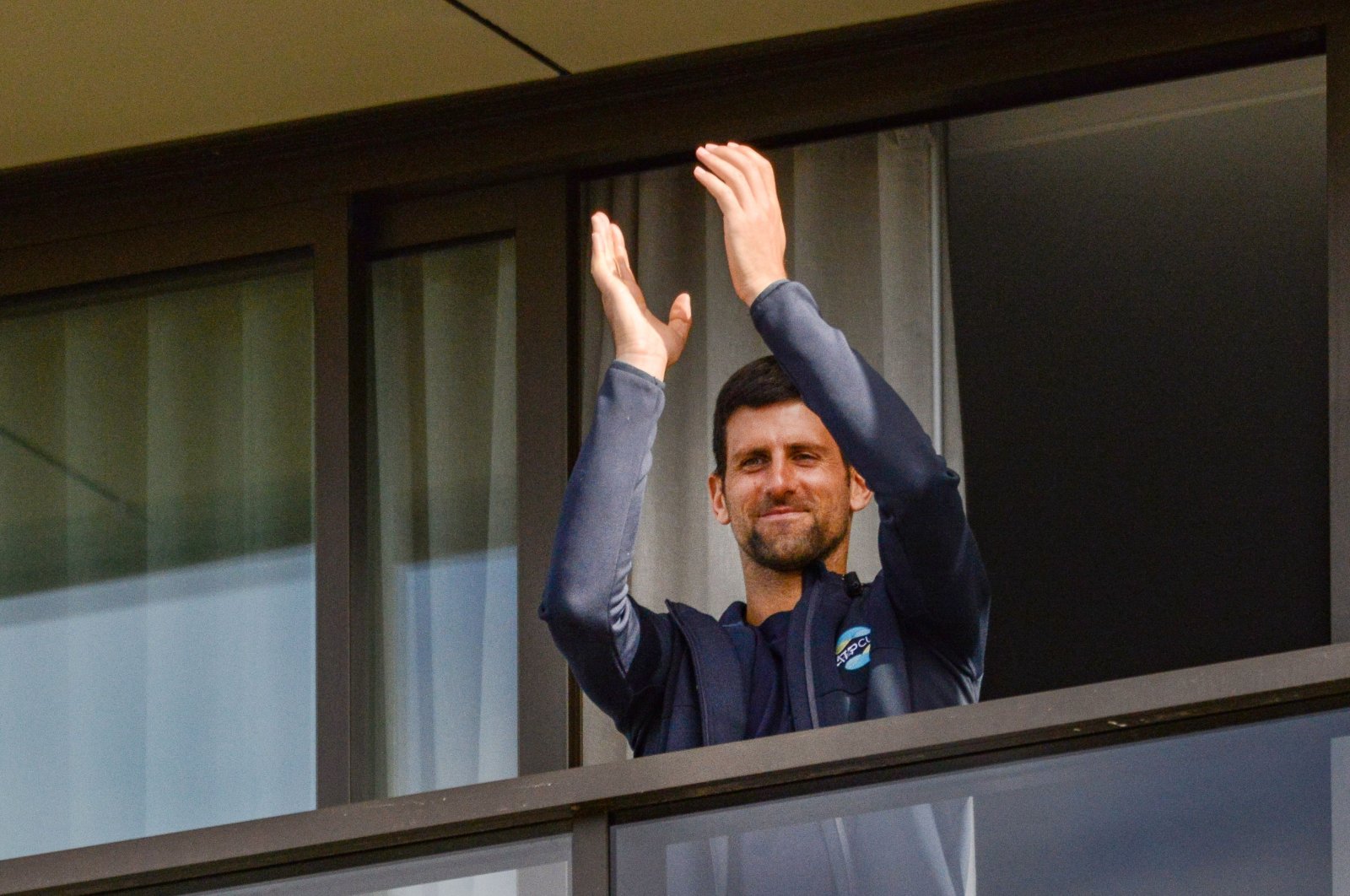 Men's world No. 1 tennis player Novak Djokovic of Serbia gestures from his hotel balcony on the last day of his mandatory two-week quarantine in Adelaide, Australia, Jan. 28, 2021. (Photo by Brenton Edwards via AFP)
by REUTERS Jan 28, 2021 12:17 pm

The first group of 960 players, coaches and officials were allowed to leave the mandatory 14-day quarantine Thursday, while Novak Djokovic and Serena Williams will be released Friday

Australian Open players were given the green light to begin exiting the country's precautionary COVID-19 quarantine on Thursday after spending two weeks strictly confined to a biosecurity hub.

The first group among the 960 players, coaches and officials isolating at three Melbourne hotels were allowed to leave starting at 6 p.m. local time (0700 GMT), with the rest expected to depart by Sunday, Victoria state health officials said.

Players isolating in South Australia state, including Novak Djokovic and Serena Williams, were also to be released ahead of an exhibition tournament in Adelaide on Friday.

Players will be free to move around the cities and surrounding regions so long as they abide by local social distancing restrictions.

Unlike the United States and European countries, which are battling to contain the virus, Australia has not had a case of community transmission for 11 straight days, and residents have regained most of their pre-COVID freedoms.

COVID-19 Quarantine Victoria (CQV) said it had not recorded any new COVID-19 infections among the Australian Open cohort on Thursday.

There remained a total of five active cases, who will need to spend longer in quarantine depending on when they tested positive.

Spain's Paula Badosa was the first player to reveal she had contracted the virus when she tested positive on her seventh day in quarantine. She was moved to a "health hotel" last Thursday to begin two more weeks of isolation and complained about the conditions to Spanish media.

Some players expressed confusion over their scheduled departure.

American Tennys Sandgren, who was among the 72 players put into a stricter quarantine after passengers on their flights to Australia tested positive, was unhappy he would not be able to check out of isolation until Friday.

"I just found out we're not going to be able to leave the room until midnight tomorrow which will put us out close to 15 days in this room," the former men's quarterfinalist said in a video posted on Instagram on Thursday.

Sandgren tested positive for COVID-19 two weeks ago before his flight from Los Angeles but said he was allowed to board following intervention from Australian Open tournament director Craig Tiley.

She posted a meme on Twitter saying, "Why??" and wrote: "When Australian Government orders u to stay another extra day just because."

A few of the top players in Adelaide, including home hero and women's world No. 1 Ash Barty, will play in a charity exhibition in Adelaide on Friday.

"It's going to be a really good day in Adelaide," said Barty, who plays Simona Halep in an evening match.

"It's the first day out of quarantine, the first match in front of a crowd for a long time, so I'm super excited," the Austrian said.