Big gap between Turkish cities in number of COVID-19 jabs 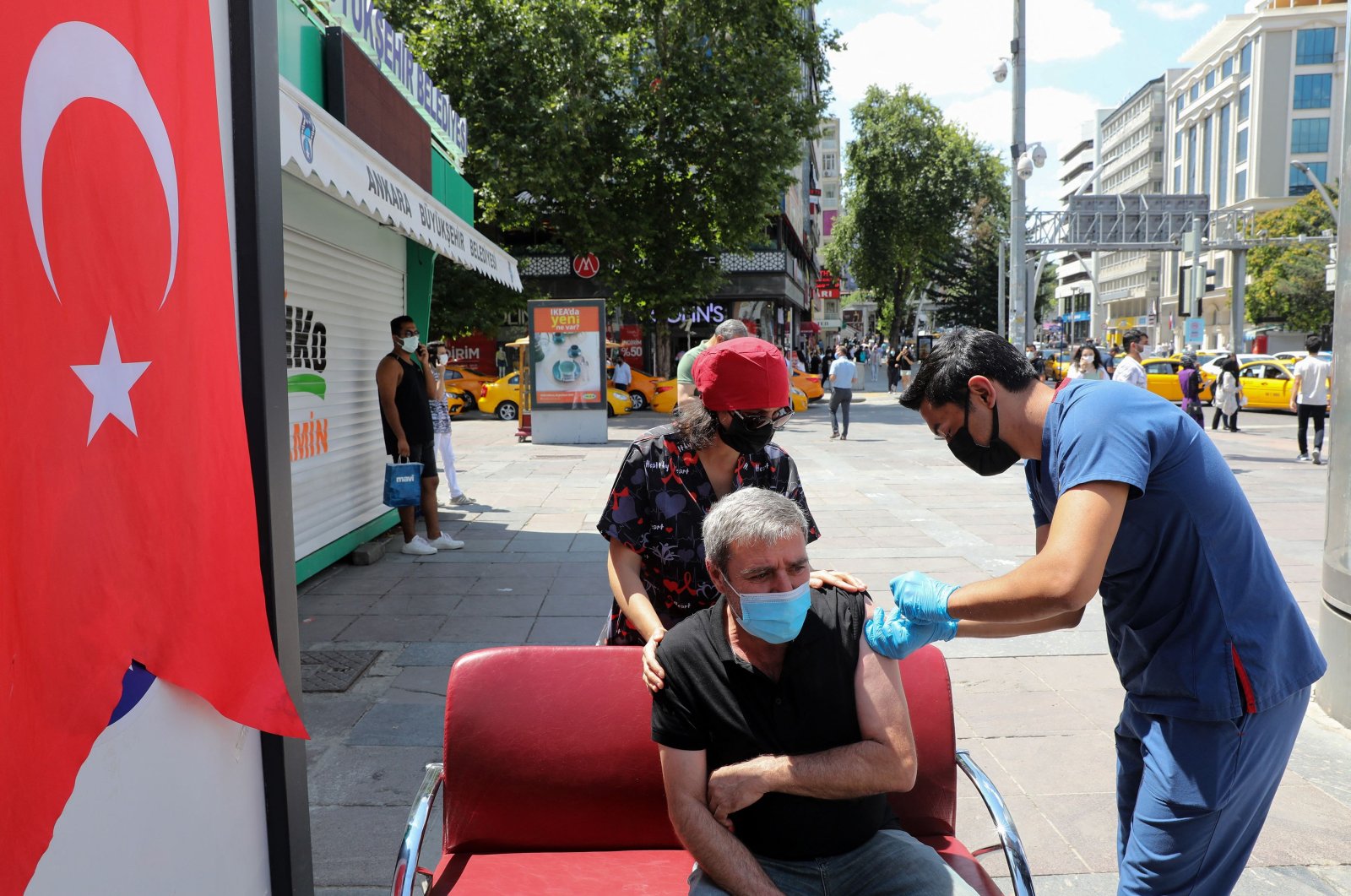 Facing a spike in daily infections, Turkey continues its battle against the COVID-19 pandemic unabated as the country has surpassed 75 million doses of vaccine administered so far and could top 80 million fairly soon, despite a gap between the country's east and west in vaccination numbers.

One of the main reasons for the rise in cases is the slowdown in vaccination numbers, especially in Turkey’s eastern provinces.

According to data, the vaccination ratio is at its highest at 88% of the population in southwestern Muğla province, while southeastern Şanlıurfa ranks last with 41.5%.

The country's current total of 75.8 million jabs – which includes people that have been fully vaccinated or who have only had the first dose – means it is getting closer to a full return to normal life even though the spike in cases remains concerning.

The number of daily infections in the country is around 25,000 per day, which marks the highest number since early May.

The country's vaccination program began in January with health care workers and, after a slow start, gained momentum earlier this summer. In a few weeks, the country managed to open vaccines to all age groups 18 and above. Figures released by the Health Ministry show that more than 41 million people have received their first doses while more than 28 million people are fully vaccinated, as of Sunday. Some 5.3 million people, particularly those taking the Sinovac vaccine, received their “booster” shots or third dose.

The vaccination program is essential to curb the pandemic according to authorities. Through jabs, the country aims to reach a mass immunity level of at least 70%. At the current pace, it is not a far-fetched goal. Nevertheless, vaccine hesitancy, prevailing especially in eastern regions, threatens the country’s gains against the pandemic. The Health Ministry has deployed mobile crews in several provinces with low vaccination rates, going door to door to people who refused vaccination, hoping to convince them and give them jabs on site.

Inoculation is not mandatory in the country, but the government is considering imposing certain restrictions on the unvaccinated. Health Minister Fahrettin Koca had announced Thursday that they may ask for weekly polymerase chain reaction (PCR) tests from people without two doses of vaccine, in order to greenlight their travel in buses and planes and attendance to events in seated venues, like cinemas and concert halls.

Daily coronavirus cases in Turkey fluctuated at around 24,000 to 25,000 this week. Experts say a surge in the cases is inevitable, as people tended to ditch rules like mandatory masks and social distancing after a normalization process began on July 1, lifting almost all pandemic-related restrictions, including curfews.

The fast-spreading delta variant is also a culprit in this new wave of infections. Experts are calling on the public to ensure that they receive their two doses of vaccine against the coronavirus in time, describing the inoculation as key for success in defeating the spread of the delta variant.

“We see a growth in delta cases, although it is slow. We have to achieve adequate immunity by vaccination, before the autumn sets in,” professor Nurettin Yiyit, a member of the Health Ministry’s Coronavirus Scientific Advisory Board, said last month. Every autumn, more people spend time indoors as temperatures drop, which heightens the risk of the disease, especially in places that are not properly ventilated.

After a lull last summer, Turkey saw a rise in the daily cases in autumn 2020, forcing authorities to impose restrictions. The number of delta cases is still low in Turkey according to the latest figures. The country also faces a threat from delta plus cases. The Health Ministry announced the first delta plus cases last month.

The country continues its intensive vaccination campaign to curb the spread of COVID-19, and all residents aged 18 and over are eligible for shots.

To date, over 63% of the adult population has received at least one vaccine dose.

A new decision by the Health Ministry may further boost the campaign by saving on precious vaccines. Though Turkey does not suffer from any problems accessing the two vaccines it approved, China’s Sinovac and the Pfizer-BioNTech COVID-19 vaccine, it still needs to ensure its stocks are not depleted as a precaution and so that it can offer “booster” doses.

The ministry canceled second dose appointments for people who had recovered from coronavirus and were administered the first dose of the Pfizer-BioNTech vaccine. Last month, the ministry pulled the timeframe of vaccine requirements for recovered coronavirus patients from six months following recovery to three months. Experts say one dose of the Pfizer-BioNTech vaccine is sufficient to develop an immune response in someone previously infected.

Now, vaccination aversion remains the biggest challenge for the country. Social media is awash with messages of anti-vaxxers and vaccine skeptics voicing their concerns over the jabs. Conspiracy theories such as “tracking chips” being used in vaccines, unproven allegations that jabs cause infertility and rumors that vaccinations make people "magnetic” proliferate. Officials repeatedly urge people to get vaccinated, while scientists look to assure the public that the vaccines are safe.

In the meantime, work is underway on locally made vaccines. Most are still in the early stages of development, but scientists hope to achieve results this year. Vaccines being developed in the country range from an inactive vaccine to an intra-nasal spray and a virus-like particle (VLP) vaccine. President Recep Tayyip Erdoğan told reporters that universities and pharmaceutical companies are working hard, and he expected “mass production” would start in September or October “based on what they pledged.”

The country has also started to inoculate volunteers with a Turkish-developed COVID-19 vaccine.