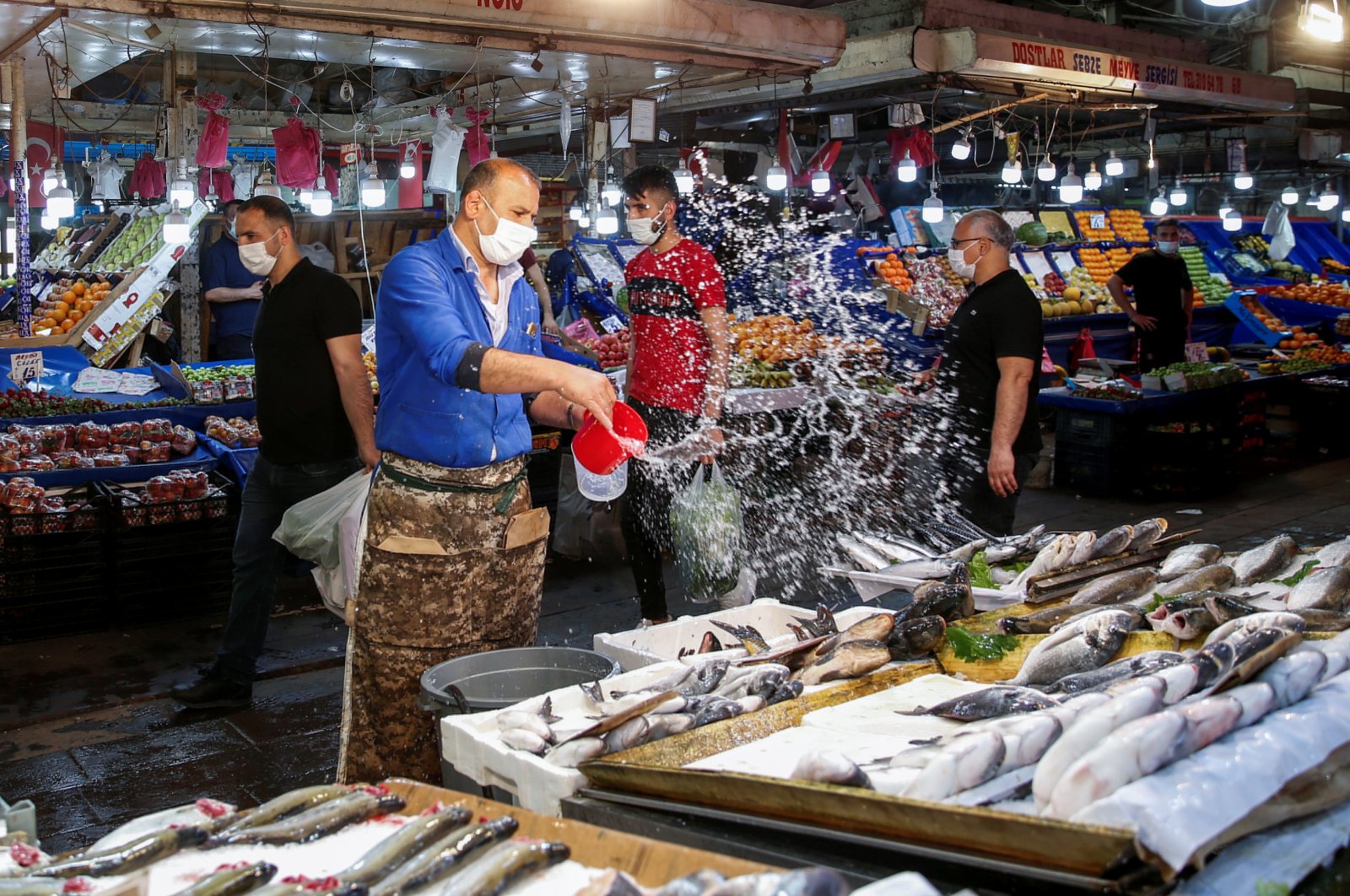 A vendor wears a protective mask at a fish and seafood stall at a local market during a nationwide "full closure" to prevent the spread of the coronavirus disease (COVID-19), in Ankara, Turkey May 7, 2021. (Reuters File Photo)
by Daily Sabah with Agencies Oct 17, 2021 2:42 pm

Seasonal flu, which has largely disappeared in last two years thanks to COVID-19 precautions, is feared to make a comeback. Turkish scientists warn that social distancing, mask wearing and other hygiene practices are crucial to avoid a “double pandemic”

As COVID-19 cases continue on an upward trend in Turkey, the pandemic may get even worse in the coming winter months amid the risk of a flu epidemic.

Coronavirus Scientific Advisory Board member professor Serap Şimşek Yavuz warned that several respiratory viruses, such as the Rhinovirus, have been detected much earlier this year.

“With the easing of COVID-19 restrictions, the flu epidemic may well make a comeback. This is our biggest concern,” she said.

“Because the immune system of the public will naturally be lower towards the flu virus, risk groups must have their flu jabs administered,” Yavuz added.

“People can have both COVID-19 and flu vaccines at the same time. There is no negative interaction between the two,” she emphasized.

The ratio of fully vaccinated people in Turkey is still at around 50%, and Yavuz underlined that vaccination uptake has slowed down recently.

“We need to have a more active vaccination campaign. If we want to stop the infections, we need to have at least 80% of people immune to COVID-19, be it recovery from infection or vaccination. Only then we can stop the spread,” she insisted. Yavuz called upon people still undecided – despite all scientific evidence – to go get their jabs as soon as possible.

Turkey has so far administered over 113.86 million doses of COVID-19 vaccines since it launched an immunization drive this past January, according to official figures released on Saturday.

More than 54.8 million people have gotten a first dose of a coronavirus vaccine, while around 47.2 million are fully vaccinated, the Health Ministry said.

Turkey has also given third booster shots to more than 10.8 million people.

As many as 357,167 virus tests were conducted over the past day, the data showed.

Turkish Health Minister Fahrettin Koca said on Twitter that the number of coronavirus cases among young people is on the rise.

"Contrary to expectations, the rate of vaccination among our university students is low," Koca added, urging them to get the jab.

Turkovac, previously known as ERUCOV-VAC before President Recep Tayyip Erdoğan renamed it, was developed in seven months by a team of scientists led by professor Aykut Özdarendeli. It started its Phase 1 trials in November 2020. Phase 2 trials began on Feb. 10, and as yet no side effects have been reported among volunteers.

Turkovac was developed by scientists at Kayseri's Erciyes University and started its Phase 3 human trials in June. The inactive vaccine is now at the emergency-use approval phase, and Health Minister Koca announced that its mass production will likely begin later this month pending approval.

As Turkovac is in its final rounds of testing, the vaccine’s developers also launched a comparison study between it and China's CoronaVac in Istanbul and the capital, Ankara. The study will examine the efficacy level of both vaccines after their third doses. Volunteers without a history of COVID-19, between ages of 18 and 59 and who have received two doses of CoronaVac have been admitted to the study of 220 people. Researchers aim to see which jab is safer and more efficient for the third dose. Volunteers will be monitored for their antibody levels and possible side effects in a double-blind study carried out over 168 days. The study runs parallel with another study where volunteers are divided into two groups: those injected with CoronaVac and those injected with Turkovac for first doses.

Çelik also underlined that even though the mRNA method is still relatively new in making vaccines, it creates more antibodies compared to inactive jabs.

“You all need to get coronavirus vaccines,” he said, calling upon the nation to get vaccinated as soon as possible.

“Nevertheless, I can say this clearly that mRNA vaccines create more antibodies. We cannot deny this. These vaccines provide a better antibody response,” Çelik added.

“With the inactive vaccines, you make the virus unable to lead to illness. For example, Sinovac and Turkovac vaccines are like this,” he said.

The country once ranked sixth in terms of vaccination in the world, but the drive has somewhat slowed down, now ranking Turkey eighth globally.

Since December 2019, the pandemic has claimed over 4.89 million lives in at least 192 countries and regions, with more than 240.21 million cases reported worldwide, according to the US' Johns Hopkins University.