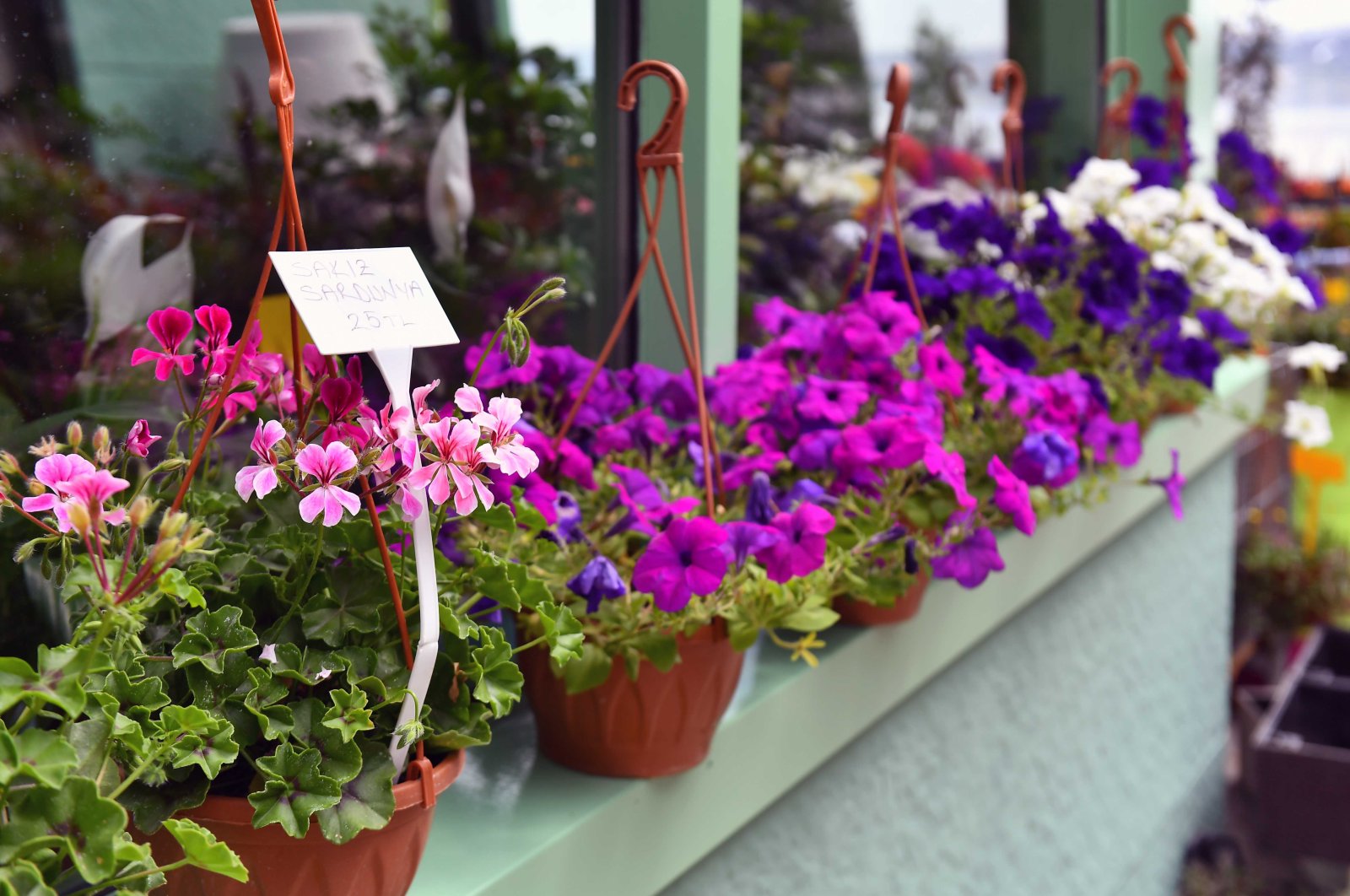 Throughout history, Turkish people have been using flowers and plants for medicinal, culinary and landscaping purposes

With Turkey’s hugely varied geographical landscape, which sits on two continents and is surrounded by four seas, it should come as no surprise that the country is home to more than 9,000 flower species, one-third of which are native. In Turkey, flowers and plants have been used for medicinal, culinary and landscaping purposes throughout history and the country is renowned for having popularized flowers like tulips and roses in Europe. There do happen to be certain special plants with healing properties and accompanying tales, while others are strikingly beautiful but dangerous.

The following list tells you all you need to know about Turkey's most popular plants:

Turkey is best known for its tulips, in Turkish “Lale,” and in their heyday in the Ottoman Empire, there was even an era devoted to the flowers. The “Tulip Era” was a relatively peaceful period for the empire in which the colorful bulbous tulips exported from Turkey to Holland and greater Europe became wildly popular. The tulip remained Turkey’s national flower and it adorns tiles, textiles and carpets as motifs. In the mountainous region of southeastern Turkey, you can come across the “inverted tulip,” which grow as clusters of bell-shaped colorful flowers that hang upside-down.

Frequently seen lining the streets and beaches along Turkey's southern coast, the Nerium oleander, referred to as “Zakkum” in Turkish, is a shrub or small tree that grows white, pink or red five-lobed flowers. It has historically been used as an ornamental and landscaping plant in the Mediterranean region. As beautiful as the flowers are, beware because the plant is actually poisonous, but its bitter taste is so unpalatable it serves as a repellent against consumption by people or animals. The oleander reaches its peak bloom in the summer, so it is important for tourists to be aware that ingesting the plant could lead to nausea, abdominal pain, confusion and an irregular heart rhythm, while the sap can cause skin irritation and eye inflammation. The bottom line is that interacting with this plant in any way, this includes its stems and branches, can lead to serious illness or even be fatal to humans and animals. In addition, using its branches as kindling for fires or skewers can also lead to irritation. This could be the reason why in the Quran it is referred to as a "tree that springs out of the bottom of hell." It's beautiful, so admire but do no touch.

The Turkish sweetgum is part of the Liquidambar orientalis genus native to the Eastern Mediterranean where they grow in flood plains, valleys and stream banks. Referred to in Turkish as “günlük” or “sığala ağacı,” which translates to frankincense/myrrh and marsh tree, there is a forest of Turkish sweetgums that serves as a nature reserve and arboretum for the preservation of the species located between Dalyan and Köyceğiz. There are also large areas in Marmaris and Burdur's Bucak under protection. These trees have a lifespan of 300 years and they can grow 35 to 40 meters in height (around 115 feet to around 131 feet). According to Greek Mythology, the tree was created by the power of Apollo who turned his love Leucothoe who had been buried alive into the tree known for its healing properties and perfumed scent. The sap is used to make a balsam referred to in Turkish as "sığala yağı" and in English as "storax." It is used in the perfume industry but was also used to embalm mummies and served as a love potion and oil used by Queen Cleopatra in Roman Baths. The preparation is a strenuous process that takes place from May to November and includes stripping and tapping the trunk to produce scrap, which is scraped off and infused in stages in boiling water.

“Sarı Kantaron,” in English St John’s wort, is a flowering plant that grows in abundance in Turkey’s Mount Ida and Aegean region. The small yet distinctive yellow flowers have served as a popular mood enhancer in tea and tablet format and as a healing oil to treat wounds. This herb’s mood-lifting properties have lead to its reputation as a "natural antidepressant," while oil made by crushing the flower petals and soaking them in oil is sold at farmers markets as a salve for wounds, scars and sunburns. According to legend, the oil was used by the Knights Hospitaller of the Order of St. John after battles in the crusades. Its dried flowers are consumed as a tea and can be found in abundance at spice shops and farmers' markets.

Milk thistle, in Turkish “deve dikeni,” is one of the most sought-after herbal supplements in the world due to its rare ability to protect the liver. The seeds contain silymarin, which is thought to have antioxidant and anti-inflammatory effects. Its blossom is a spectacular violet color, although there are also white variations, and they flourish in the wild in Turkey's Mediterranean and Black Sea regions.

Turkey has an entire town aptly named Safranbolu after the saffron that is grown there. Saffron is actually the orange-colored thread-like stigma found in the Crocus Sativa flower and it is known for being the world’s most expensive spice. This is due to its labor-intensive process of harvesting the three stigmas from each purple flower. According to sources, it can take up to 140,000 crocus flowers to obtain 1 kilogram (2.2 pounds) of saffron. It is also only produced in a number of places in the world, Safranbolu being one of them. A sight to behold, Safranbolu was added to the list of UNESCO World Heritage sites in 1994 due to its well-preserved Ottoman-era houses and architecture. Historically the town served as a saffron trade center and caravanserai. The spice is used frequently in Turkish and other international cuisines, particularly in rices and meat dishes, in Turkey there is even a dessert by the name of "zerde" that is centered on saffron. The spice has also been used as a natural die but its real strengths lie in its medicinal properties as it can be used as an antioxidant, anti-inflammatory, metabolism enhancer and weight loss aid. It has been used in Anatolia since the Hittites and sources say it was most likely exported during the Ottoman Empire.

Wild orchids are a wonderful sight to come across in Turkey, ranging from purple to even white in hues as little dangling flowers hanging off their stems. However, in Turkey, referred to as “salep,” it is the plant’s tubers and the powder ground from them that holds high significance both as a popular warm beverage and as a basis for ice cream. This labor-intensive process also renders the product expensive as it is said it takes up to 1,000 orchids to produce a single kilo of the powder. Furthermore, it takes up to eight years for the orchid’s tubers to grow enough to be harvested, a process that usually means the end to that plant’s life. Salep was a popular drink in the Ottoman Empire and continues to be widely consumed in winter. Any tourist who has been trapped in the ice cream show put on by the tell-tale fez-wearing tenders at ice cream stands, can be assured they are most likely about to try Turkey’s famous Kahramanmaraş ice cream, which is known for its pliability, in part thanks to the central ingredient of salep.

Turkey is a major world exporter of the beloved rose, in Turkish “gül,” which is also used regularly in dessert, as perfume and for cosmetic purposes. The coveted rosa damascena, otherwise known as the Damask or Anatolian Rose comes from Isparta, a city in western Turkey that is literally known as “The City of Roses.” A tiny village in Şanlıurfa by the name of Halfeti, which was also coined southeastern Turkey’s first Cittaslow city, is renowned for its endemic “black rose,” which blooms in such a dark red it takes on black hues.