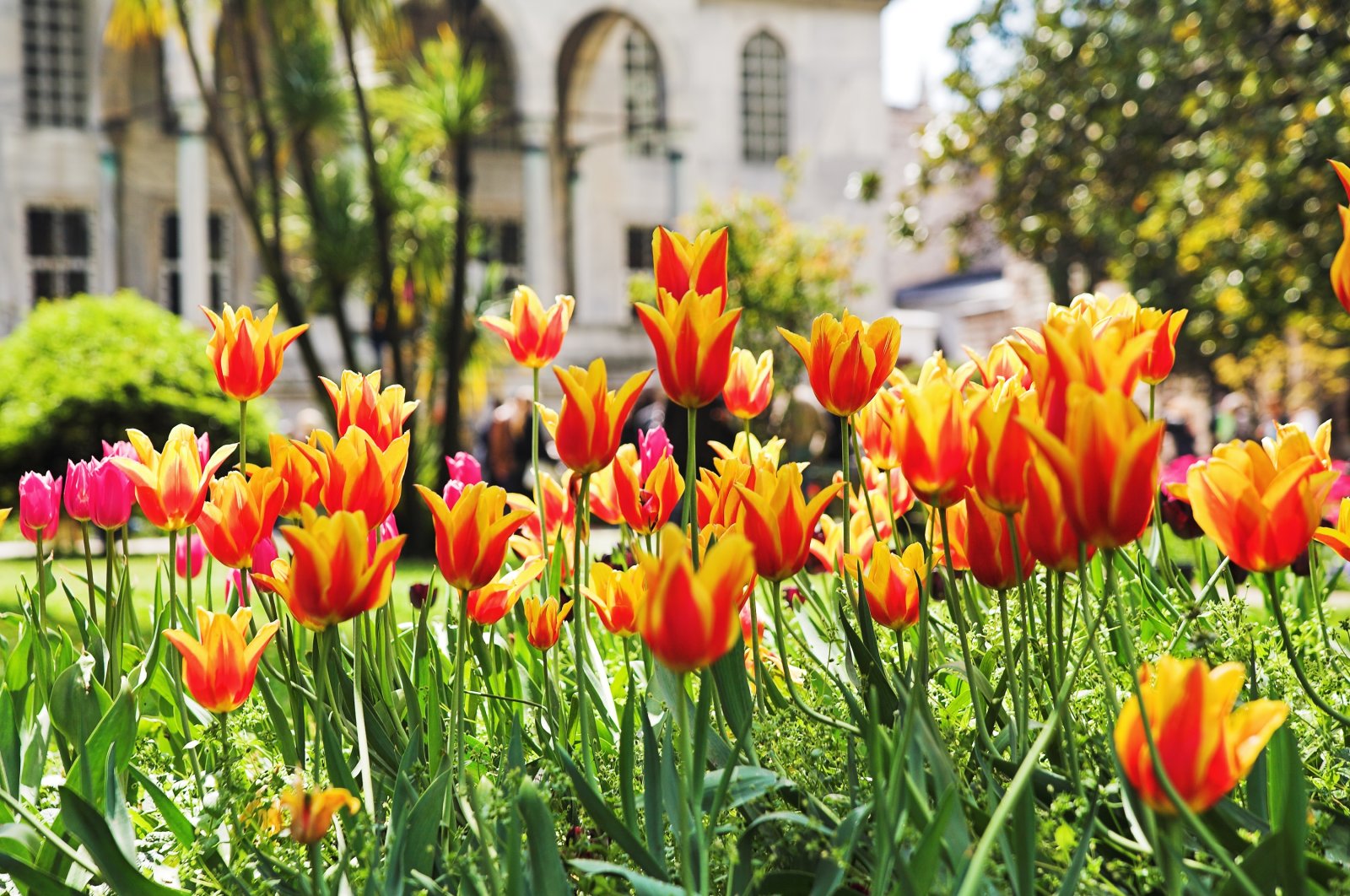 At the time of year when millions of tulips bloom throughout Istanbul's parks during its Tulip Festival, let's trace the roots of this favorite flower in Turkish culture, history and literature

There are many flowers associated with various countries in world history. Many flowers in nature, like lilies, roses and thistles, have influenced cultural codes. With the arrival of the spring months, these colorful plants burst into flowers and awaken a world of feeling and thought. Let's take a look at the history of tulips, one of the eye-catching flowers of spring, and how they are reflected in culture and art.

Since 2006, Istanbul has held its Tulip Festival every April. Tulip carpets made of living flowers are “rolled out” in Sultanahmet Square, while areas like the historical Emirgan Park, the 60th Anniversary Göztepe Park and Gülhane Park are adorned with hundreds of tulips. The municipalities of many other cities across the country also join in the floral festivities.

With the annual festival, art and cultural life is reinvigorated through a wave of tulip-themed exhibitions and various other events. However, the coronavirus pandemic prevented the festival last year, and this year's edition seems rather uninspired.

Tulips, which are in fact native to Anatolia, have spread around the world over the centuries and inspired many artists. Essentially wildflowers, tulips are bulbous and herbaceous plants from the lily family. While the flower was relatively unknown during the Roman and Byzantine periods, it started being used as an ornamental flower in Anatolia in the 12th century. The flower made its artistic debut in the artworks of the Seljuk Sultanate of Rum and continues to this day.

In Ottoman art, flowers were not limited to the house and garden, and were featured across all aspects of life. Tulips were one of the most commonly used flowers by Ottoman artists. Tulip motifs were used to decorate everything, ranging from marble, stones, architectural structures, clothes, fabrics, carpets and rugs to tombstones and even weapons like cannons and rifles.

The motifs were used in calligraphy, illuminated manuscripts and to decorate books and Ramadan mahyas (a special adornment with lights). The flowers were mentioned in songs, poems and idioms.

Interest in tulips has increased gradually since the 14th century. Ottoman Sultan Mehmed II, also known as Mehmed the Conqueror, was a good poet and wrote many poems under the pseudonym "Avni.” In these poems, he also mentioned tulips. Tursun Bey (1420-1491), the historian of Sultan Mehmed II’s era (1451-1481), wrote that after the conquest of Istanbul, the sultan gave importance not only to the buildings but also to the gardens when reconstructing the city, noting that he gave particular importance to flowers.

Every sultan after Sultan Mehmed II had shown an interest in tulips. During the period of Sultan Ahmet III (1718-1730), tulips came into fashion. Historians call this period of peace and tranquility the "tulip period.” It is referred to as the tulip period because of the tulip cultivating craze that swept all segments of society, from official authorities to the lowest echelons. Rumor has it that people were willing to pay a fortune for certain tulip bulbs.

This period is thought to be the most refined period of Ottoman culture and art. Many initiatives, including literature, miniature, scientific studies and industrial moves, were also attempted in this period. Momentum in miniature, painting and decorative arts reached its peak at this time.

For instance, Abdülcelil Levni, considered the greatest Ottoman miniature artist, lived in this period and brought a fresh and different take to miniature. Ahmet Nedim Efendi, one of the greatest poets of Turkish poetry, is also one of the prominent artists of the period. In Turkish classical music, new makam names “lale-gül” (tulip-rose) and “lale-ruh” (tulip-soul) were established. Makam is a system of melody types used in Turkish classical and folk music. Flemish painter Jean Baptiste Vanmour reflected these years through his paintings.

Additionally, closer ties were established with Europe during the era as there was no war. Turkish ambassadors visited Western countries and introduced them to the period’s refined Ottoman culture. The Western nobles were highly influenced by the culture and thus Turquerie, expressed as Turkish fashion, emerged.

Tulip age in the West

We do not know with certainty how tulips were brought from the Ottomans to Europe, or by whom.

Among the flowers that Ambassador Ogier Ghiselin de Busbecq, who was sent by the Austro-Hungarian Emperor Ferdinand I to Sultan Suleiman I, also known as Suleiman the Magnificent, brought to Europe from Istanbul are thought to be tulips.

Busbecq saw a field of tulips on the road while passing through Edirne on a horse-drawn vehicle in the spring of 1554, and likened their shape to a turban and wrote that the flower was called "tulipan." Tulipan is derived from the Persian word "dülbent/tülbent," which means turban and is also used in Turkish. Indeed, Turks have always called this flower “lale.” But the word tulip has become commonly used, inspired by Busbecq’s description of “flower in the form of a turban.”

French traveler and doctor Pierre Belon (1517-1564), who traveled to Eastern countries in 1546, was the first European writer to describe the tulip that had spread rapidly in Europe after Busbecq. Calling the tulip the "red lily" in his memoirs, Belon mentioned that many foreigners would come to Istanbul to buy the bulbs of the flower.

Europe's first tulips bloomed in the Augsburg botanical garden in Germany in April 1559 and were named "tulipa turcarum" (Turkish tulip) by the Swiss physician and botanist Conrad Gesner (1516-1565). The flower, which spread throughout Europe in a short time, attracted great attention, especially in the Netherlands. Just like in the Ottoman Empire, hysteria developed around the flowers, known as "Tulipomania." The classic novel “The Black Tulip” by Alexandre Dumas describes this period.

Despite tulips originating from Anatolia, the Netherlands and Hungary spring to mind when it comes to tulips today. Thanks to their strong distribution networks and well-established commercial structures, they are in the first place in tulip production. The former interest in these flowers is reviving with festivals in Turkey.

The orient is a world of symbols. There is a different meaning behind every word, look and action here. The heart was at the center of the Ottoman world of thought. Therefore, human relations were experienced more intensely in the empire.

In this part of the world, people liked to express their feelings indirectly, not explicitly. Art and human beings were intertwined. For example, a vizier was both a poet, a soldier and an artist. The illiterates spoke through poetry. There were plenty of expressions, proverbs, metaphors and similes. In this culture, two flowers stand out even more with their symbolic meanings. One of them is a rose, the other is a tulip. The rose symbolizes the Prophet Muhammad, and the tulip symbolizes Allah. Rumor has it that the rose was created from the light of the prophet. In the sources, the wives, children and friends of the prophet called "companions" unanimously say he always smells like a rose. Therefore, a very large body of literature about roses has been developed over the course of the history of Islam.

Tulip, on the other hand, is similar to the spelling of word "Allah" in Arabic. The tulip's pointed petals are linked to a mosque, its middle part is the dome and the leaves on both sides are minarets. In Persian, the word "tulip” is also written with the same letters as the word "Allah," and when read backward, it reads "hilal," meaning crescent. The crescent is the flag symbol of the Islamic world. In addition, tulips represent the oneness of Allah because they yield only one flower from a single stem and seed.

In Ottoman divan poetry, the cheek of the lover with its red color and the tears of the lover are compared to a tulip. The blackness in the middle of the flower is a wound in the bosom of the lover due to his admiration and jealousy of his beloved one’s cheeks. From another analogy, tulip and its blackness represent a cheek with a mole on it.

In the 13th century, Sufi philosopher Mevlana Jalaluddin Rumi thought about the hidden black color in the tulip, which resembles a joyous red from the outside, and considered its opening to be the worst of smiles. Many Sufis were fond of tulips. Seyyid Fehim Arvasi, one of the last period Ottoman sufis, had an inverted tulip symbolizing sadness planted in his tomb.

Many analogies have been made regarding the shape of the tulip. Poet Nedim said, “O heartwarming tulip! Do not be away from the flower garden. I cheer up with you; you are my glass of wine." In Divan literature, tulips are likened to wine in terms of their red color and to a wine glass in terms of their shape. In Nedim’s poem, a wordplay is also made with the similarities in the spelling of the words tulip and wine glass. Wine cheers people up because it affects the mind. Therefore, it is considered a source of joy. Seeing the tulip that looks like a wine glass in the garden, the poet is also cheered up and his heart is opened.