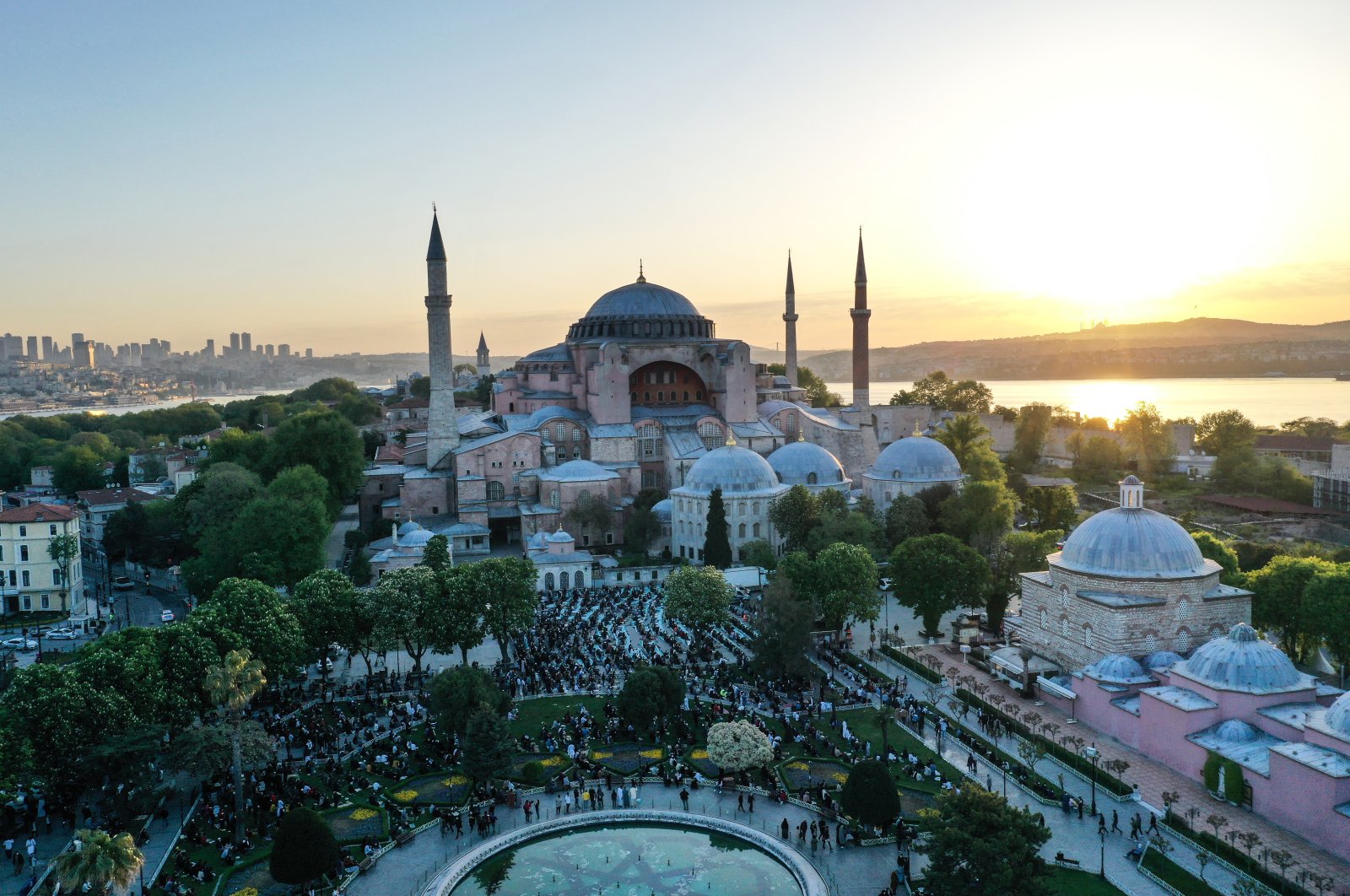 The Hagia Sophia Grand Mosque in the historic Sultanahmet district of Istanbul is seen during bayram prayers on the first day of Eid al-Fitr, which marks the end of the holy month of Ramadan, Istanbul, Turkey, May 13, 2021. (AA Photo)
by Anadolu Agency May 13, 2021 3:04 pm
RECOMMENDED

Muslims in Istanbul welcomed Ramadan Bayram, also known as the Eid al-Fitr, at the Hagia Sophia Grand Mosque Thursday as the first bayram prayers in decades were held inside the iconic structure.

Thousands of worshippers arrived at the mosque to attend the first bayram prayer in 87 years, but only a lucky couple of hundred devotees were admitted inside the mosque over COVID-19 precautions. The rest performed their prayers outside at the adjacent Sultanahmet Square.

The prayer was led by Ali Erbaş, head of Turkey's Presidency of Religious Affairs (Diyanet). Erbaş delivered the Eid sermon holding a sword in his hand, an age-old Ottoman tradition that signifies conquest.

"These holidays are being held during exceptional times that define us, unite our hearts, and reinforce our brotherhood," he said.

He offered special prayers for Palestinians who are facing the onslaught of Israeli forces.

"The attempt of Israel, which does not give up its aggressive attitude even during Ramadan, to occupy the holy city of Jerusalem and our first Qibla, Masjid Al-Aqsa, brings great sorrow and pain to all believers," Erbaş said.

He added that attacking Muslim worshippers "barbarically" violated the sanctity of the holy mosque and the memory of the prophets.

"Our innocent Palestinian brothers and sisters are being forcibly evicted from their homes and subjected to massacres," he said, noting that every holiday will pass with a heavy heart until Palestine and the Al-Aqsa are liberated.

Parliament Speaker Mustafa Şentop, who also performed the bayram prayer at Hagia Sophia, told reporters that the situation in Palestine and the Israeli aggression is overshadowing the joy of bayram.

Israel continues to target Gaza with heavy bombardment so far killing at least 83 Palestinians, including 17 children and seven women, according to health officials. At least 487 others have been injured, in addition to heavy damages to residential buildings across Gaza.

Tensions have been running high across the Palestinian territories after Israeli soldiers attacked last week Palestinians offering prayers inside Al-Aqsa during the Muslim holy month of Ramadan.

Palestinians have been protesting against a recent Israeli court ruling ordering the eviction of Palestinian families from the Sheikh Jarrah neighborhood of East Jerusalem – despite attacks by Israeli soldiers.

In the past, Hagia Sophia served as a cathedral for 916 years and 86 years as a museum. The landmark, which was added to UNESCO World Heritage List in 1985, served as a mosque for 500 years from Istanbul's conquest in 1453 to 1934, when it was declared a museum.

It was reverted back to its original status in July 2020 following legal procedures.

Besides being a mosque, the Hagia Sophia is also among Turkey's top tourism destinations and remains open for domestic and foreign visitors.