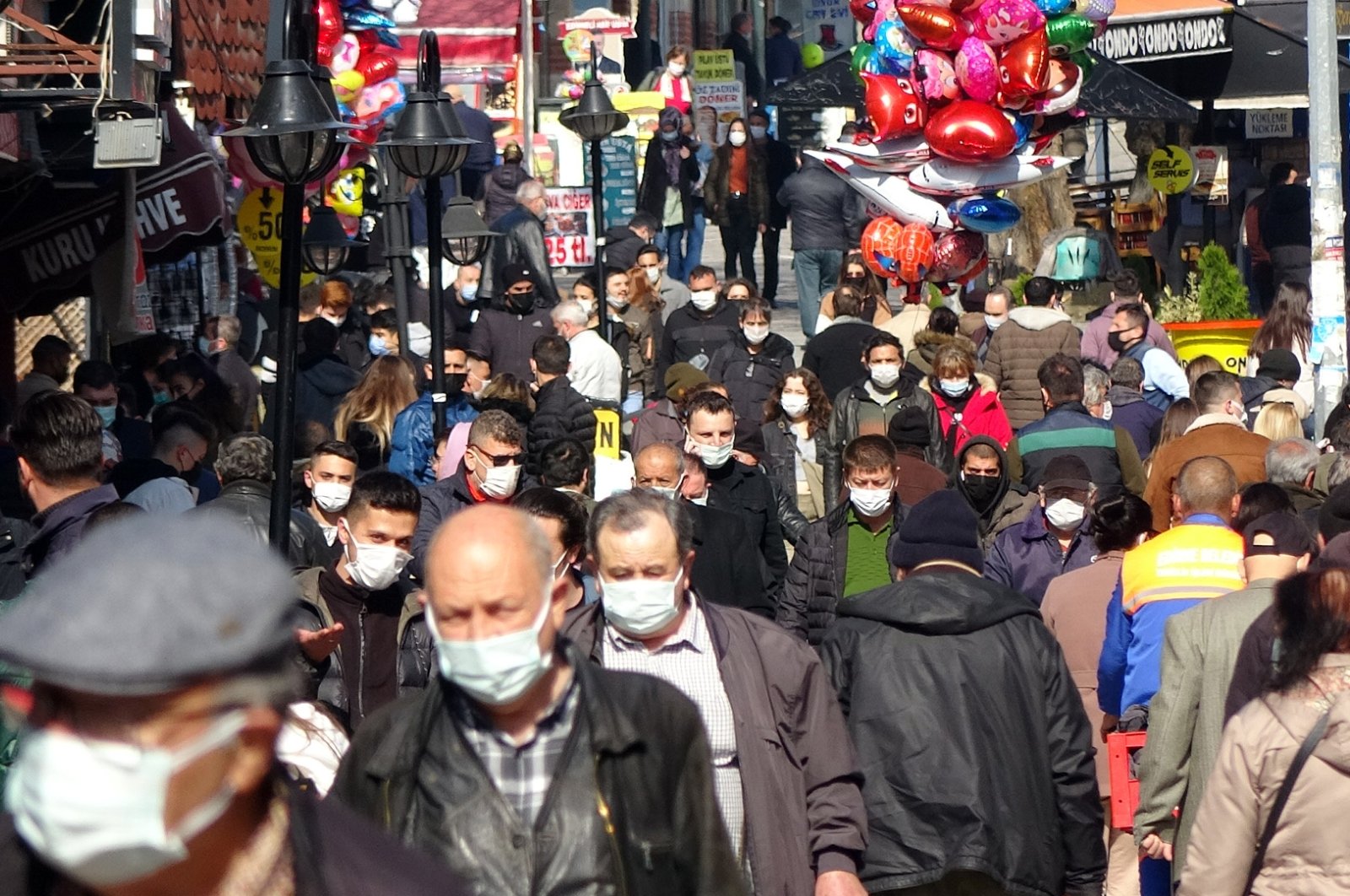 Days after Turkey rolled out a normalization process based on local data, provinces under high risk for the coronavirus outbreak, rush to curb the infections with their own measures

“Blue” means relief, “red” is trouble, “orange” is concerning and “yellow” is somewhere between good and bad. In this new color-coded era, millions check a map of the country issued by the Health Ministry every week. Since March 1, authorities relegated power to decide the fate of each 81 provinces to local public health boards. Colors symbolizing the risk level occasionally change while local authorities seek to convince the public to exert more caution.

In the end, it depends on public vigilance to curb the number of cases, and officials repeatedly call for adhering to wearing protective masks, social distancing and hygiene. When compliance falls short, they turn to more drastic measures. In Giresun for instance, a Black Sea province where around 282 cases are seen for each 100,000 people living there, the situation is grim. The “red” province with “very high risk” decided to implement more control on access to businesses this week. Any shop, workshop, factory and similar venues larger than 100 square meters are now obliged to ask for a Life Fits Into Home (HES) code for everyone entering those premises, be they staff or customers. The HES code, generated by a Health Ministry-run digital project, assigns a unique number to every citizen. The number allows checking whether the person bearing the number was infected.

The Giresun Governorate ordered the referral of people with COVID-19 who were identified through the HES code inquiry, to law enforcement. Those who test positive are required to quarantine, and violators are subject to fines.

The “normalization process” which means lifting restrictions like curfews and reopening businesses including restaurants and cafes, is only allowed and in a gradual way, in provinces with relatively low risk. Giresun still seems far from normalization, like its neighboring provinces in the region which dominate the list of the highest number of coronavirus cases in Turkey. Authorities stepped up inspections for compliance with rules while public venues are regularly disinfected. In busy streets, citizens are routinely stopped for HES code and body temperature checks. The public is also warned to stay indoors as long as possible. Giresun also suffers from a high rate of virus variants. Last month alone, 500 among 1,600 cases were virus variants, according to media reports. Giresun Governor Enver Ünlü told reporters last week that they expected more infections as many of the variants spread faster than the original coronavirus. “We will focus on people in self-isolation at home and increase their checks,” he said.

The situation also worsens in Izmir, the country’s third largest city, which was among the big cities that saw a drop in the cases. Provincial Governor Yavuz Selim Köşger warned on Tuesday that the number of cases increased by 50% between the last week of February and the first week of March, compared with the first weeks of last month. Izmir is among “high risk” provinces, and the latest figures show there are roughly 66 cases per 100,000 people. “If we continue ignoring rules, we can be among provinces with very high risk,” Köşger told Anadolu Agency (AA). “We had about 44 cases per 100,000 only back in February,” he lamented. With rising numbers, authorities increased inspections. Currently, 14,000 inspectors are in the field to check whether locals are careful about wearing masks and not causing crowding. “We are aware that the public is bored with restrictions, but feeling relaxed (amid normalization) can cause bigger problems. This is a controlled normalization which means restrictions are being lifted but on condition that people continue wearing masks and adhere to social distancing,” said Köşger, governor of the province where more than 4.5 million people live. He pointed out people sitting next to each other without wearing masks in public spaces like parks as one of the factors that heighten the risk of infections. “Every day, seven to eight people die of the coronavirus in Izmir,” he added. Still, the province fares well in terms of responding to the rise, he says, noting that the hospitals had sufficient capacity for new patients.

In the Thrace (Trakya) region in the country’s northwest, Edirne, located on the border with Europe, stands out as the only place in the red, or very high-risk, category. Public health authorities decided to ask for a HES code from people on busy streets in the province. There will be limited access to the three busiest streets in Edirne, with barriers put on roads leading there. People are allowed to enter those streets only after a HES inquiry. Under a new rule, one person is allowed “for every four square meters” on those streets to prevent crowding.

Kırklareli and Tekirdağ in Trakya are also at high risk, with about 116 and 111 cases per 100,000 people respectively, still relatively lower than Edirne where this number is around 180.

“Everyone should do what he or she can do against the outbreak. We have to follow the rules,” Ümit Akaylar, an Edirne resident, told AA. “People should stop visiting each other at home,” he says. Hakan Fındıklı, another local, says “red” is not good for Edirne. “Let’s give up old habits of coming together and standing too close to each other,” he said, addressing fellow residents of the province.

In Bursa, a northwestern industrial hub that was in the “yellow” category last month, people are worried about entering the high-risk category. But it is not surprising as streets and squares are brimming with people challenging social distancing rules or keeping at least one and a half meters from each other. “The weather got warmer and restrictions were relaxed. So, people started getting out more and forgot about crowding,” Ertuğrul Kocabaş, a local, told Demirören News Agency (DHA) on Tuesday. “This is people’s mistake, and it will be them suffering for it too,” he laments.

“It is a coronavirus party out there. People are outside all the time. I only go shopping for necessary things, but others don’t. If things continue like that, there will be more cases,” said Mehmet Vehbi Kamacı, another local.

The capital Ankara does better compared with other big cities, but there was still a rise, up to about 54 cases per 100,000 people in the first week of March, compared with around 39 in February. Associate professor Ümit Savaşçı, a clinical microbiology expert working at a hospital in the capital, says “scary days” may be ahead for the capital. “You can see how busy the city is, whether in traffic or restaurants,” he says. Still, he says, this is not the impact of the normalization process where people rushed to restaurants and cafes and took to the streets on Saturday when a two-day weekend lockdown was eased. “We will see the impact in 10 days probably,” he warned.