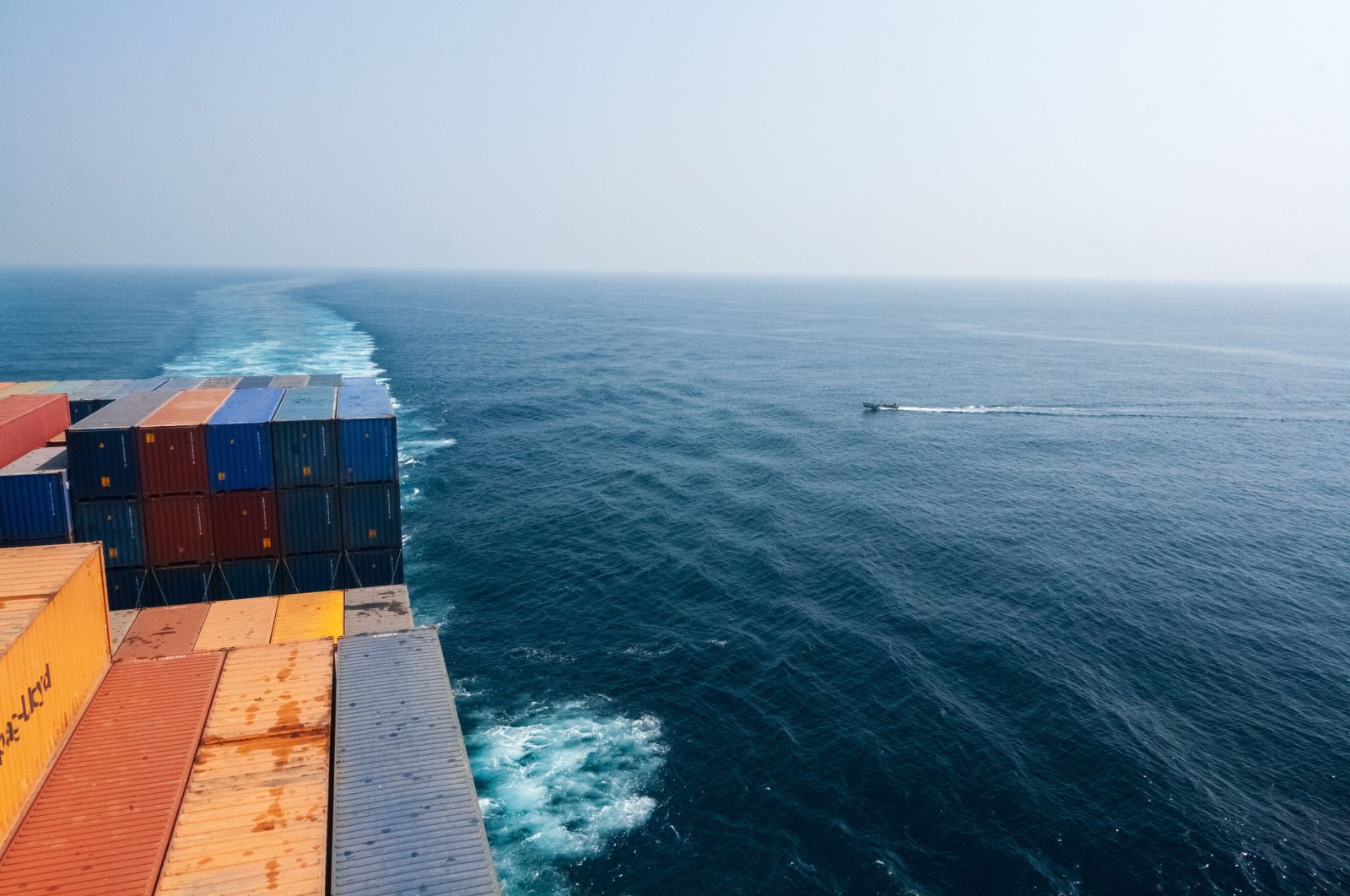 Illustration of a probable act of piracy on a cargo ship off the Horn of Africa off the coast of Somalia in the Gulf of Aden, Yemen, on Jan. 11, 2017. (File photo by Camille Delbos / Art In All of Us / Corbis via Getty Images)
by Daily Sabah with Agencies Jan 24, 2021 12:45 pm

The Liberian-flagged M/V Mozart was sailing from Lagos, Nigeria, to Cape Town in South Africa when it was attacked Saturday morning 100 nautical miles (185 kilometers) northwest of the island nation of Sao Tome and Principe.

Turkey’s Maritime Directorate said the crew initially locked themselves in a safe area, but the pirates forced entry after six hours. During the struggle, one crew member aboard died. It identified the victim as engineer Farman Ismayilov of Azerbaijan, the only non-Turkish crew member.

After kidnapping most of the crew, the pirates left the ship in the Gulf of Guinea with three sailors aboard, state-run Anadolu news agency said. According to reports, the pirates disabled most of the ship’s systems, leaving only the navigation system for the remaining crew to find their way to port. The vessel is now anchored off neighboring Gabon, and the body of a slain Azerbaijani sailor is due to be brought to shore, according to Turkish officials.

The Liberian-flagged cargo ship Mozart anchored at Port-Gentil at 11 a.m. (8 a.m. GMT), Transport and Infrastructure Minister Adil Karaismailoğlu said in a tweet later in the day.

"First of all, we need to ... get there, see the crew," and then retrieve the body, she added.

Maritime security consultancy Dryad Global described the attack as “an exceptional incident for both its severity and distance from shore.” Last year, boardings in the waters off West Africa rose to 18 from 13 in 2019, the London-based firm added.

Foreign Minister Mevlüt Çavuşoğlu also said he had spoken to the senior officer remaining on the Mozart, Furkan Yaren, and that the morale and physical condition of the sailors aboard were good.

“We are continuing coordinated negotiations for the release” of the abducted sailors, he said.

"These thugs, the pirates who kidnapped our citizens have not yet contacted us," Çavuşoğlu added.

"There have been attacks on our ships and other countries' ships before," he underlined.

They call after a certain time and make their demands. But all kinds of preparation and work have been done," the minister said.

Later, Çavuşoğlu also had a telephone call with his Azerbaijani counterpart, Jeyhun Bayramov, and expressed his condolences for the crew member who was killed in the attack.

The top diplomat also emphasized that he told Bayramov that the body of the slain sailor would be sent back home via Turkey.

"The necessary funeral procedures will be carried out," he added.

Çavuşoğlu addedd that he also spoke to Osman Levent Karsan, the operator of the company that owns the ship, and conveyed his condolences, emphasizing that necessary actions will be taken to rescue the crew as soon as possible and return them safely.

Turkish embassies in surrounding countries, including Nigeria, have been mobilized for the crew, diplomatic sources said.

President Recep Tayyip Erdoğan has also spoken to Yaren twice, The Communications Directorate said in a statement, adding that Erdoğan issued orders for the recovery of the kidnapped crew.

Erdoğan received information that the ship was moving toward Gabon with three crew members, it said.

Closely following the process, Erdoğan has instructed authorities regarding the rescue of the ship's personnel.

“The owners and operators of the M/V Mozart, which was hijacked at gunpoint in the Gulf of Guinea, have regretfully confirmed that one of its crew has been killed and others abducted,” Istanbul-based Boden Maritime said.

Company officials expressed their condolences and support for the crew's families, it said.

They called for a sensitive approach to the rescue for the sake of crew members and underlined they were trying to solve the problem as soon as possible in the safest way.

The Mozart was attacked by pirates early Saturday while one crew member was killed and 15 others kidnapped from the ship which had a total crew of 19.

Fifteen crew members moving from Lagos, Nigeria to Cape Town, South Africa were kidnapped, while three remained with the pirates, David Johnson, the head of the U.K.-based EOS Risk Group had said in the statement.

Mozart was attacked in the Gulf of Guinea, 160 kilometers (100 miles) off Sao Tome, he added.

A tape recording had been shared on Twitter and believed to feature the captain of the ship as he says: "I don't know where I'm going. The pirates dismantled all cables, nothing is working. Only the navigator works. They gave me a route, I'm moving accordingly."

In July 2019, 10 Turkish seamen were kidnapped off the coast of Nigeria. They were released less than a month later.

A total of 195 incidents of piracy and armed robbery were reported, up from 162 in 2019. Globally, the Gulf of Guinea, the Singapore Strait and Indonesian waters were particularly affected.

Out of 135 sailors abducted globally last year, 130 were recorded in the Gulf of Guinea – the highest ever number of crew members kidnapped in the area stretching thousands of kilometers from Senegal to Angola.