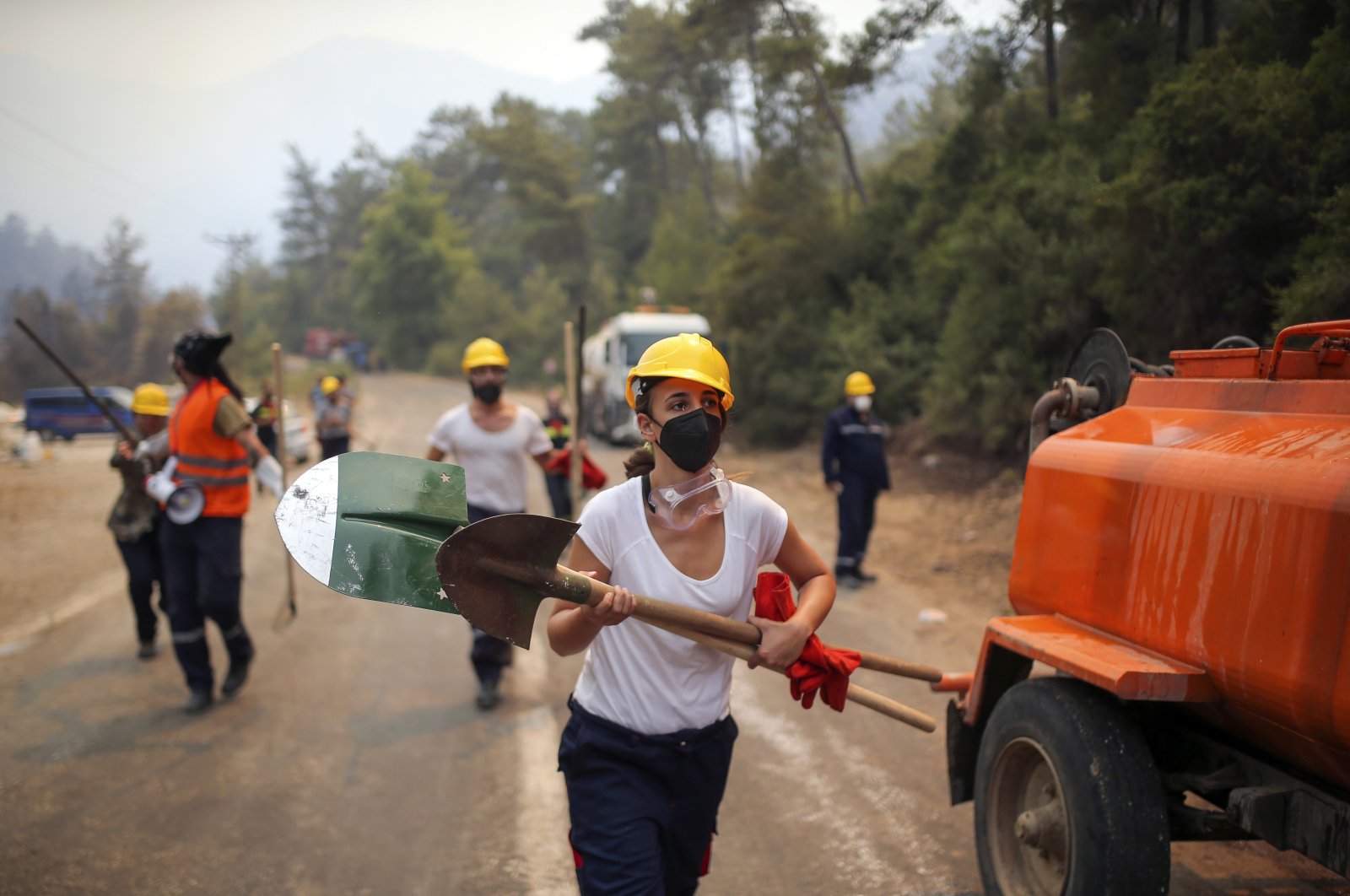 Volunteers run as they fight wildfires in Turgut village, near tourist resort of Marmaris, in Muğla, southwestern Turkey, Aug. 4, 2021. (AP PHOTO)
by Daily Sabah with AP Aug 06, 2021 10:46 am
RECOMMENDED

Thousands of firefighters from across the country joined efforts against forest fires. The sheer scale of fires ravaging forests also created a spirit of solidarity in the country. Some organized aid campaigns for survivors while others traveled to fire-hit areas to help.

Actor Tevfik Erman Kutlu was on a break from filming in Istanbul when the wildfires that have devastated swaths of southern Turkey first erupted on July 28. Desperate to play a part in efforts to put out the fires, he and five friends drove 725 kilometers (450 miles) to the coastal resort of Marmaris to lend a helping hand to combat the blazes. Once there, the friends formed a human chain helping to carry fire extinguishers, unfolded and rushed a firetruck’s hose to firefighters and even tackled a hillside fire themselves, dousing pressurized water on flames under the guidance of fire crews.

"Instead of sitting at home and watching videos of the fires on social media, I wanted to be of use,” the 41-year-old film and television actor currently starring in "Eşkiya Dünyaya Hükümdar Olmaz (The Bandits), a TV drama series about the mafia underworld broadcast by ATV, told The Associated Press (AP).

They are among the hundreds of volunteers who have joined efforts to contain blazes that have swept through forests in Turkey’s southern and southwestern coasts, fueled by a summer heatwave, low humidity and strong winds.

Blazes in Marmaris were largely contained by Friday, according to its mayor. Fires also raged in some districts of Antalya province, another tourism spot. Strong winds drove one of the fires toward the compound of the coal-fueled Kemerköy Power Plant near the town of Milas, in Muğla province late on Wednesday, forcing nearby residents to flee in navy vessels and cars.

It was contained on Thursday after raging for some 11 hours and officials said its main units were not damaged. In Turgut, the visibly tired volunteers were resting after assisting the crews, some lying on the ground, others helping each other with eye drops or nursing cuts and grazes.

Elsewhere other volunteers, including veterinarians, have helped injured farm or wild animals. "At first we were 15 volunteers,” said Nuriye Çağlar, a 59-year-old pensioner from Marmaris. "I don’t know how many we are now. Forty or 50?” Mehmet Kara, a 36-year-old tourism agent from Istanbul said: "There was an unbelievable effort, sacrifice up there by our friends. We fought the fires altogether, we cooperated.”

"We had people who were burned, who were poisoned. We saw all of this as fires raged and we did what we had to do. Now, the support teams have arrived and they’re doing what’s necessary. As you can see, our friends are fighting tooth and nail,” said Kara, who drove with Kutlu from Istanbul.

It’s not unusual for people in Turkey to mobilize during times of crisis, such as earthquakes. Many jump into cars to head to the afflicted regions, taking food, water, clothing or blankets. Turkey’s most famous search-and-rescue team, AKUT, is made up of trained volunteers. The group was founded in the 1990s by mountaineers who were frustrated by a failed mountain rescue operation by the authorities.

Kutlu, best known for his role in the popular Turkish drama series "Kurtlar Vadisi" (Valley of the Wolves) said he was motivated by his "devotion to the country.” He insisted this was not the time for recriminations."Right now there’s a fire. Our focus, our only focus, is stopping that fire," Kutlu said. "We’ll then ask for someone to be accountable. Who’s to blame, who’s not? This is not the time to be fighting over that.”