A year on, WHO struggles to cope with COVID-19 pandemic crisis 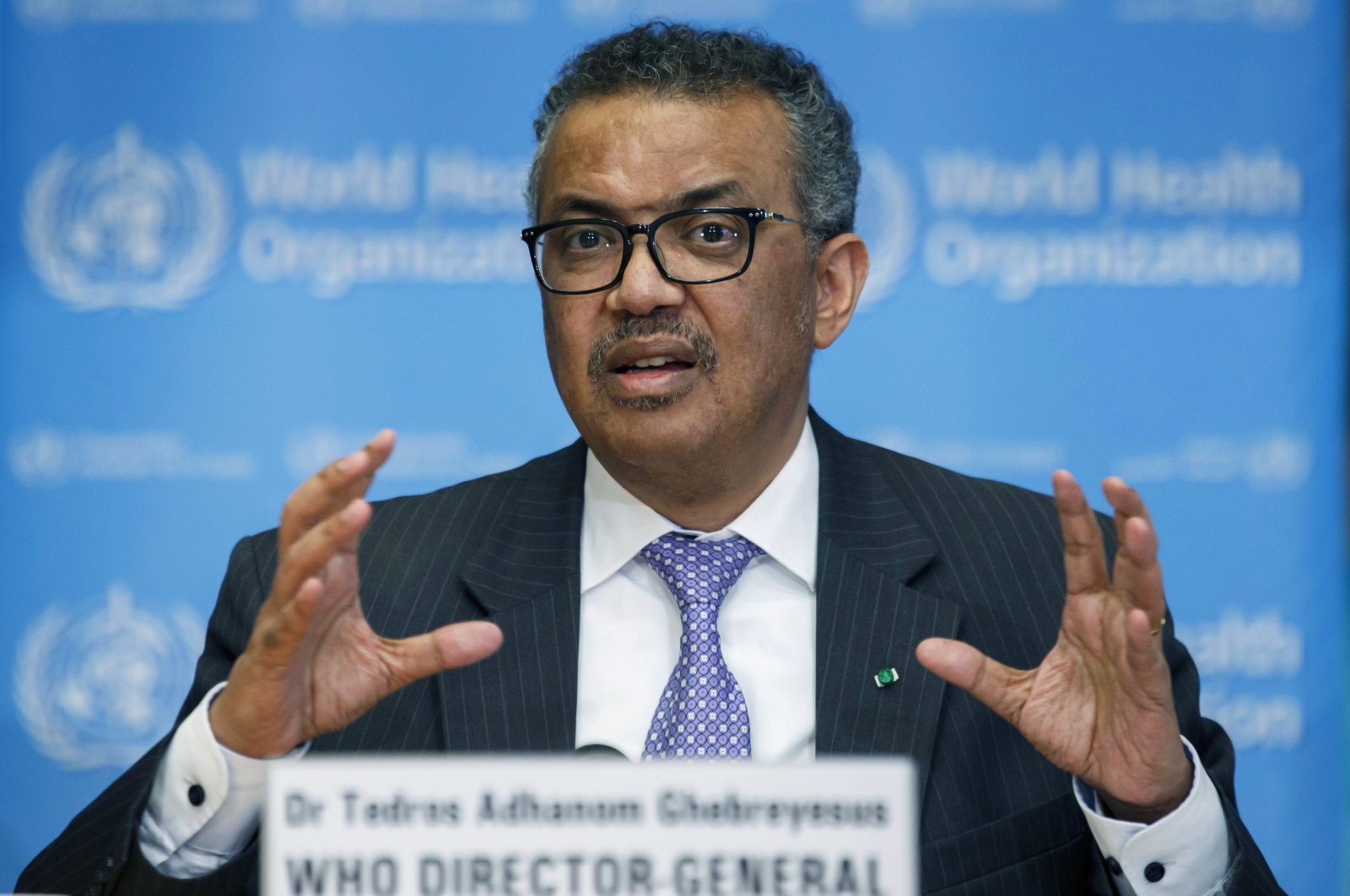 Tedros Adhanom Ghebreyesus, the director-general of the World Health Organization, speaks during a news conference, at the WHO headquarters in Geneva, Switzerland, March 9, 2020. (AP Photo)
by Agencies
Mar 11, 2021 10:28 am

The world marks a year since the World Health Organization declared the coronavirus a pandemic and though widespread vaccinations are encouraging, much of humanity still lives in dire conditions with no clear path to a normal life

When the World Health Organization (WHO) declared the coronavirus a pandemic one year ago Thursday, it did so only after weeks of resisting the term and maintaining that the highly infectious virus could still be stopped.

A year later, the U.N. agency is still struggling to keep on top of the evolving science of COVID-19, to persuade countries to abandon their nationalistic tendencies and help get vaccines where they’re needed most. The agency made some costly missteps along the way: It advised people against wearing masks for months and asserted that COVID-19 wasn’t widely spread in the air. It also declined to publicly call out countries – particularly China – for mistakes that senior WHO officials grumbled about privately.

That created some tricky politics that challenged WHO’s credibility and wedged it between two world powers, setting off vociferous Trump administration criticism that the agency is only now emerging from. President Joe Biden’s support for WHO may provide some much-needed breathing space, but the organization still faces a monumental task ahead as it tries to project some moral authority amid a universal scramble for vaccines that is leaving billions of people unprotected.

"WHO has been a bit behind, being cautious rather than precautionary,” said Gian Luca Burci, a former WHO legal counsel now at Geneva’s Graduate Institute. "At times of panic, of a crisis and so on, maybe being more out on a limb – taking a risk – would have been better.”

WHO waved its first big warning flag on Jan. 30, 2020, by calling the outbreak an international health emergency. But many countries ignored or overlooked the warning.

Only when WHO Director-General Tedros Adhanom Ghebreyesus declared a "pandemic” six weeks later, on March 11, 2020, did most governments take action, experts said. By then, it was too late, and the virus had reached every continent except Antarctica. About 4,600 deaths had been officially recorded around the world at the time, according to Agence France-Presse (AFP).

A WHO-led team that traveled to China in January to investigate the origins of COVID-19 was criticized for failing to dismiss China's fringe theory that the virus might be spread via tainted frozen seafood. That came after WHO repeatedly lauded China last year for its speedy, transparent response – even though recordings of private meetings obtained by The Associated Press (AP) showed that top officials were frustrated at the country's lack of cooperation.

"Everybody has been wondering why WHO was so praising of China back in January" 2020, Burci said, adding that the praise has come back "to haunt WHO big time.”

Some experts say WHO’s blunders came at a high price, and it remains too reliant on iron-clad science instead of taking calculated risks to keep people safer – whether on strategies like mask-wearing or whether COVID-19 is often spread through the air.

"Without a doubt, WHO’s failure to endorse masks earlier cost lives,” said Dr. Trish Greenhalgh, a professor of primary care health sciences at Oxford University who sits on several WHO expert committees. Not until June did WHO advise people to regularly wear masks, long after other health agencies and numerous countries did so. Greenhalgh said she was less interested in asking WHO to atone for past errors than revising its policies going forward.

In October, she wrote to the head of a key WHO committee on infection control, raising concerns about the lack of expertise among some members. She never received a response.

"This scandal is not just in the past. It’s in the present and escalating into the future,” Greenhalgh said. Raymond Tellier, an associate professor at Canada's McGill University who specializes in coronaviruses, said WHO’s continued reluctance to acknowledge how often COVID-19 is spread in the air could prove more dangerous with the arrival of new virus variants first identified in Britain and South Africa that are even more transmissible. "If WHO’s recommendations are not strong enough, we could see the pandemic go on much longer,” he said.

With several licensed vaccines, WHO is now working to ensure that people in the world’s poorest countries receive doses through the COVAX initiative, which is aimed at ensuring poor countries get COVID-19 vaccines.

But COVAX has only a fraction of the 2 billion vaccines it is hoping to deliver by the end of the year. Some countries that have waited months for shots have grown impatient, opting to sign their own private deals for quicker vaccine access.

Tedros has responded largely by appealing to countries to act in "solidarity,” warning that the world is on the brink of a "catastrophic moral failure” if vaccines are not distributed fairly. Although he has asked rich countries to share their doses immediately with developing countries and to not strike new deals that would jeopardize the vaccine supply for poorer countries, none have obliged.

Yet throughout the pandemic, WHO has repeatedly declined to censure rich countries for their flawed attempts to stop the virus. Internally, WHO officials described some of their biggest member countries' approaches to stemming COVID-19 as "an unfortunate laboratory to study the virus” and "macabre.”

More recently, Tedros seems to have found a slightly firmer voice – speaking truth to leaders like Germany’s president about the need for wealthy countries to share vaccines or criticizing China for dragging its heels in not quickly granting visas to the WHO-led investigative team.

Since first emerging in China at the end of 2019, the coronavirus has killed more than 2.6 million people and forced unprecedented curbs on movement that eviscerated economies.

The enormity of the challenge entering the second year of the pandemic was highlighted Wednesday in Brazil, where a surge fueled by more contagious new variants saw a record 2,286 deaths reported for the day.

While hospitals are faltering as a highly contagious coronavirus variant tears through the country, the president insists on unproven treatments and the only attempt to create a national plan to contain COVID-19 has just fallen short.

For the last week, Brazilian governors sought to do something President Jair Bolsonaro obstinately rejects: cobble together a proposal for states to help curb the nation’s deadliest COVID-19 outbreak yet.

The effort was expected to include a curfew, prohibition of crowded events and limits on the hours nonessential services can operate. The final product, presented Wednesday, was a one-page document that included general support for restricting activity but without any specific measures.

In Brazil's wealthiest state, Sao Paulo, at least 30 patients died this month while waiting for intensive care unit (ICU) beds, according to a tally published Wednesday by the news site G1. In southern Santa Catarina state, 419 people are waiting for transfer to ICU beds. In neighboring Rio Grande do Sul, ICU capacity is at 106%.

Over the president’s objections, the Supreme Court last year upheld cities and states' jurisdiction to impose restrictions on activity. Even so, Bolsonaro consistently condemned their moves, saying the economy needed to keep churning and that isolation would cause depression. Measures were relaxed toward the end of 2020, as COVID-19 cases and deaths ebbed, municipal election campaigns kicked off and home-bound Brazilians grew fatigued by quarantine.

The most recent surge has been driven by the P1 variant, which Brazil's health minister said last month is three times as transmissible as the original strain. It first became dominant in the Amazonian city Manaus and in January forced the airlift of hundreds of patients to other states. Brazil's failure to arrest the virus' spread since then is increasingly seen as a concern not just for Latin American neighbors, but also as a warning to the world, Ghebreyesus said in a March 5 press briefing.

"In the whole country, aggressive use of the public health measures, social measures, will be very, very crucial,” he said. "Without doing things to impact transmission or suppress the virus, I don’t think we will be able in Brazil to have the declining trend.”

Last week’s tally of more than 10,000 deaths was Brazil's highest since the pandemic began, and this week's toll is on track to be even greater.

Brazil's national council of state health secretaries last week called for the establishment of a national curfew and lockdown in regions that are approaching maximum hospital capacity. Bolsonaro again demurred. "I won’t decree it,” Bolsonaro said Monday at an event. "And you can be sure of one thing: My army will not go to the street to oblige the people to stay home.”

Restrictions can already be found just outside the presidential palace after the Federal District's governor, Ibaneis Rocha, implemented a curfew and partial lockdown. Rocha warned Tuesday that he could clamp down harder, sparing only pharmacies and hospitals, if people keep disregarding rules. Currently, 213 people in the district are on the waitlist for an ICU bed.

Bolsonaro told reporters Monday that the curfew is "an affront, inadmissible” and said that even the WHO believes lockdowns are inadequate because they disproportionately hurt the poor. While the WHO acknowledges "profound negative effects,” it says some countries have had no choice but to impose heavy-handed measures to slow transmission and that governments must make the most of the extra time provided to test and trace cases while caring for patients. Such nuance was lost on Bolsonaro.

His government continues its search for silver-bullet solutions that so far have served only to stoke false hope. Any idea appears to warrant consideration, except the ones from public health experts. Bolsonaro's government spent tens of millions producing and distributing malaria pills, which have shown no benefit in rigorous studies.

Still, Bolsonaro endorsed the drugs. He has also supported treatment with two drugs for fighting parasites, neither of which have shown effectiveness. He again touted their capacity to prevent hospitalizations during a Wednesday event in the presidential palace.

Bolsonaro also dispatched a committee to Israel this week to assess an unproven nasal spray that he has called "a miraculous product.” Fiocruz's Dalcolmo, whose younger sister is currently in an ICU, called the trip "really pathetic.”

Camila Romano, a researcher at the University of Sao Paulo’s Institute of Tropical Medicine, hopes a test her lab developed to identify worrisome variants, including P1, will help monitor and control their spread. She also wants to see stricter government measures, and citizens doing their part.

"Every day is a new surprise, a new variant, a city whose health system enters collapse,” Romano said. "We're now in the worst phase. Whether this will be the worst phase of all, unfortunately, we don’t know what's yet to come.”