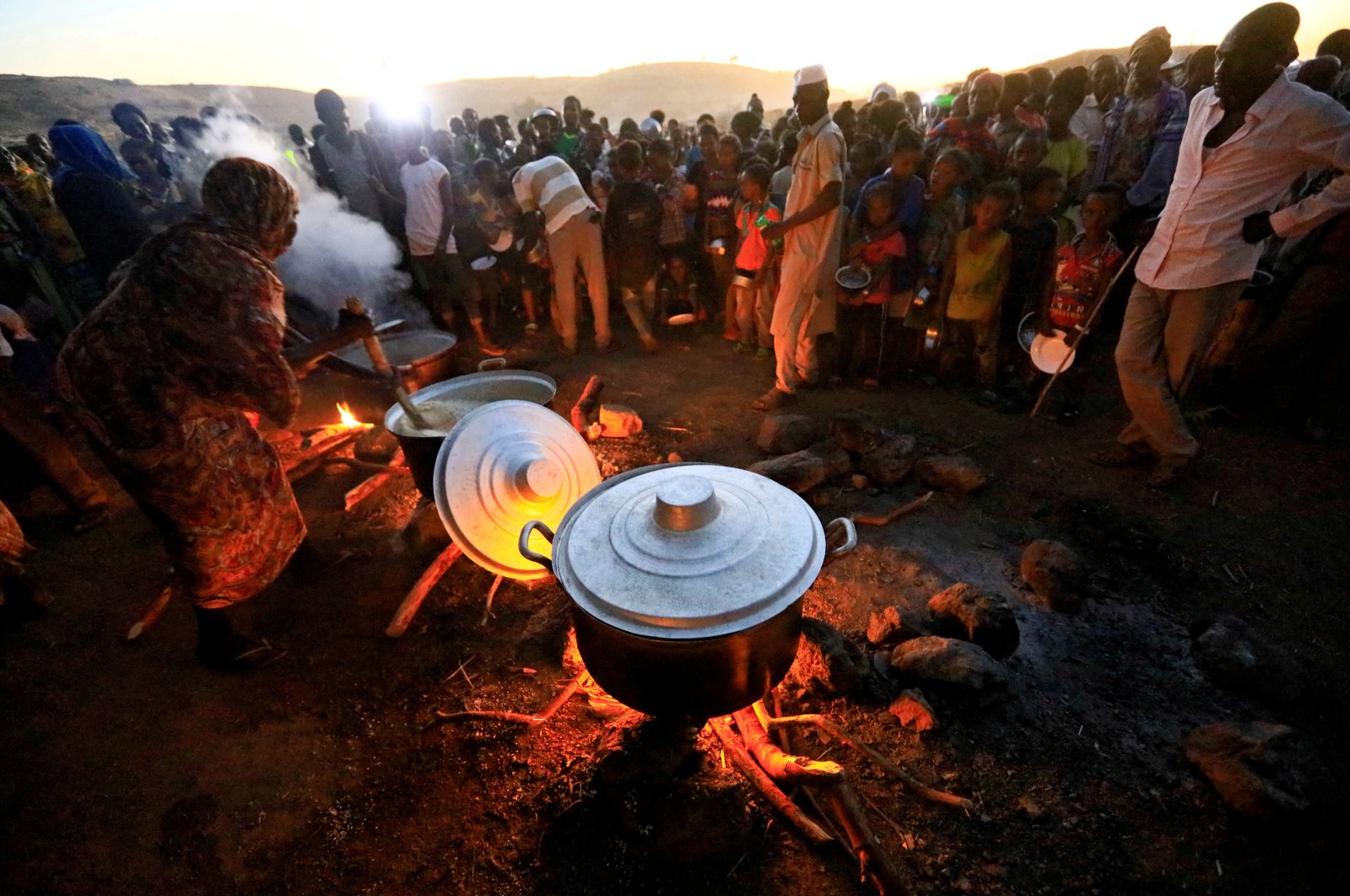 Ethiopian refugees fleeing from the fighting in Tigray region, wait for food at the Um Rakoba camp, on the Sudan-Ethiopia border, in al-Qadarif state, Sudan November 23, 2020. (Reuters Photo)
by French Press Agency - AFP May 26, 2021 1:02 pm
RECOMMENDED

The United Nations Security Council has been warned about looming famine in the war-torn region of Tigray in Ethiopia, as more than 20% of the population in the area is already facing emergency food insecurity.

In a briefing, Mark Lowcock, the U.N. under-secretary-general for humanitarian affairs and emergency relief coordinator said, "there is a serious risk of famine if assistance is not scaled up in the next two months" and warned the Security Council that urgent measures are needed to avoid the catastrophe.

Prime Minister Abiy Ahmed sent troops into Tigray in early November to disarm and detain leaders of the regional ruling party, the Tigray People's Liberation Front (TPLF). He said the move came in response to TPLF attacks on federal army camps. More than six months later, Lowcock said, the fighting and abuses continue in Tigray, where the specter of a famine has been hovering for several months.

"I urge members of the Security Council and other member states to take any steps possible to prevent a famine from occurring," he said. "Today, at least 20% of the population in that area face emergency food insecurity," he said, adding that "destruction and violence against civilians continue even now across Tigray."

"In the 6 1/2 months since the start of the conflict in Tigray in early November 2020 an estimated 2 million people have been displaced. Civilians are being killed and injured," he added. "Rape and other forms of abhorrent sexual violence are widespread and systematic. Public and private infrastructure and objects indispensable to the survival of civilians have been destroyed, including hospitals and agricultural land," he warned.

The U.N. official estimated that "over 90% of the harvest was lost due to looting, burning, or other destruction, and that 80% of the livestock in the region were looted or slaughtered."

"Despite improvements in March and the cooperation of authorities at the local level, humanitarian access on the whole has recently deteriorated," Lowcock wrote. "Humanitarian operations are being attacked, obstructed or delayed in delivering life-saving assistance. Eight aid workers have been killed in Tigray in the last six months."

Abiy's government has said it is committed to investigating human rights abuses and that it has granted "full and unhindered" access for aid workers. In a series of Twitter posts Tuesday night, the Ethiopian Foreign Ministry blamed the TPLF in part for aid disruptions.

"Remnants" of the group have "killed humanitarian workers, truck drivers & looted food & non-food items that were about to be delivered to the people who need support," it said.

The ministry also said the government had covered the bulk of food assistance delivery "but it still is a subject of attack by some corners who have been reluctant to deliver concrete support."