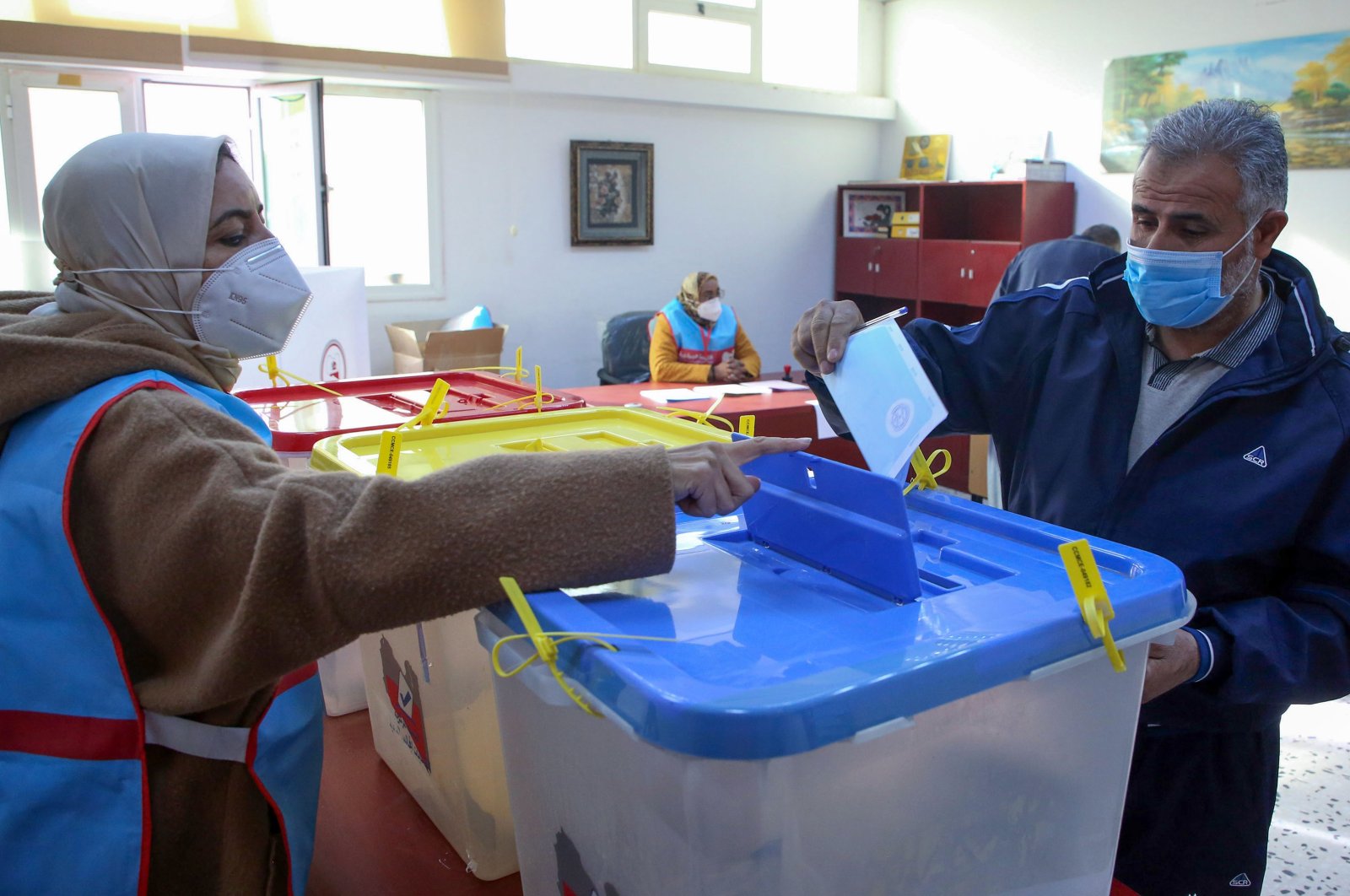 Libyans cast their ballots during the second round of municipal elections, at a voting center in the Andalus neighborhood of the capital Tripoli, Libya, Jan. 7, 2021. (AFP Photo)
by DAILY SABAH Jan 26, 2021 2:57 pm
RECOMMENDED

Aqila Saleh, the speaker of the eastern-based Tobruk parliament and known for his support of putschist Gen. Khalifa Haftar, has very little chance of becoming Libya’s new leader as part of the U.N.-led political process, Guma el-Gamaty, an academic and politician who heads the Taghyeer Party in Libya stated Tuesday.

“Libyan refused Saleh,” el-Gamaty stated speaking to Anadolu Agency (AA) and reiterated that Saleh declared warlord Haftar as the so-called commander in chief while supporting his offensive on the capital Tripoli on April 2019 that killed and displaced hundreds.

“I do not believe that Aqila Saleh will be Libyan president even temporarily because he will be close to Haftar, Egypt, the United Arab Emirates and Russia,” he added, stressing that he cannot be neutral and transparent.

“He might be harboring hostility toward Turkey and oppose the memorandums of understandings signed with Turkey,” he continued.

In recent months, there has been a flurry of international efforts to end Libya's nearly decadelong conflict.

Under an Oct. 23 agreement, Libya’s rival sides – namely the U.N.-recognized Government of National Accord (GNA) in the Libyan capital Tripoli and Haftar – reached a countrywide permanent cease-fire in Geneva, including a three-month deadline for the withdrawal of foreign troops and mercenaries.

Last week, delegates from the GNA and the rival parliament in eastern Libya said they reached an agreement on filling key state posts, including Libya's central bank governor, the head of an anti-corruption watchdog and an election commission, at talks in the Moroccan resort of Bouznika that will continue until Feb. 2.

El-Gamaty pointed out that the country conducting elections is “obligatory.”

“A new parliament that will unify Libya politically needs to be chosen,” he underlined, saying that the Tobruk House of Representatives (HoR) and the High Council of State in the capital Tripoli have long surpassed their duration of duty constitutionally.

Regarding the fact that the deadline for the departure of foreign mercenaries from Libya under the October cease-fire passed last week, el-Gamaty said that Russia was the main problem in this regard.

Saying that Russia has been active in Libya’s conflict with Russian Wagner mercenaries and those brought from Syria, the Libyan politician stated that the mercenaries controlled the field and not Haftar.

“Haftar is not competent in taking a decision to restart the war. Haftar currently has completely lost the military scene. He is not qualified to transfer armed forces from one place to another,” he said.

“This article under the cease-fire will be delayed much. Why does Russia not withdraw its mercenaries from Libya? It might want to see the outcome of the political solution and see if it can guarantee its economic and political interests,” he added.

Speaking on the new U.S. administration under Joe Biden, el-Gamaty said that Washington could pressure countries to withdraw their mercenaries.

“We know that Biden and some of his consultants criticize Turkey. Turkey is a strong, great, sovereign and independent country, yet, the new U.S. administration will want to impose some policies in issues such as relations with Russia on Turkey,” el-Gamaty said, indicating that the U.S. administration did not oppose Ankara’s role in Libya.

He reiterated that Turkey’s support to the U.N.-recognized government in Libya helped turn the tide in the war and prevented the capital from falling to Haftar’s forces.

As part of these agreements, the Turkish Armed Forces (TSK) has been training the Libyan Army. The training is being conducted with the aim of bringing the Libyan Army up to international standards and being held in the Tajoura Joint Land Training and Exercise Center in Libya.

According to the Turkish Defense Ministry, the TSK has trained around 1,300 Libyan soldiers within the scope of 18 different training programs.

“While the training of 1,100 soldiers in Libyan centers is continuing, around 1,000 soldiers that received training in centers and schools of the TSK have returned to their country and started their duties,” the ministry said in a written statement on Tuesday.

The programs include technical trainings on mortar, tank and air defense as well as reparation of vessels and basic maritime trainings.