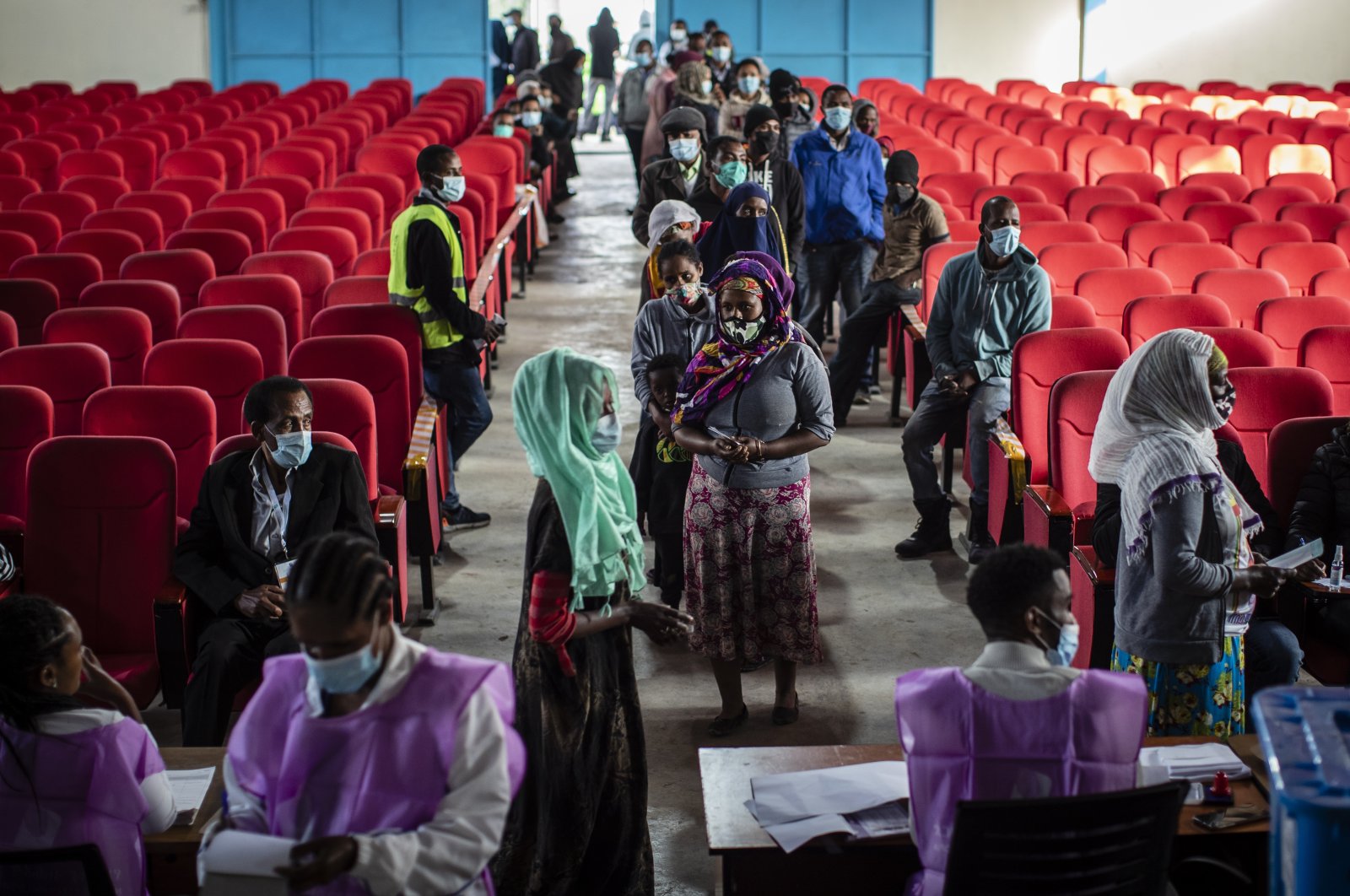 Ethiopians line up to cast their votes in the general election at a polling center in the capital Addis Ababa, Ethiopia, June 21, 2021. (AP Photo)
by ASSOCIATED PRESS Jun 21, 2021 11:36 am
RECOMMENDED

Ethiopians voted Monday in national and regional elections that have been overshadowed by the devastating COVID-19 pandemic and conflicts in the war-torn Tigray region as many view the polls as the greatest test yet for Prime Minister Abiy Ahmed.

The election, delayed from last year, is the centerpiece of a reform drive by Abiy, whose rise to power in 2018 seemed to signal a break with decades of authoritarian rule and led to him winning a Nobel Peace Prize the following year. He has described the poll as "the nation’s first attempt at free and fair elections.”

Long lines of voters were seen in some parts of the capital, Addis Ababa, while security was stepped up across Africa's second most populous country. Military vehicles were parked in key locations in the capital. More than 37 million Ethiopians were expected to vote. War and logistical issues meant ballots wouldn't be cast in more than 100 constituencies of the 547 across the country.

"We need a government that brings us peace, unity and that will stop the killing everywhere, and we also need to be pulled out from these ethnic divisions," voter Desalgn Shume said. Abiy’s ruling Prosperity Party, formed in 2019 by merging groups who made up the previous ruling coalition, is widely expected to cement its hold on power.

The party that wins a majority of seats in the House of Peoples’ Representatives will form the next government. Opposition groups have accused Ethiopia’s ruling party of harassment, manipulation and threats of violence that echo abuses of the past.

Some prominent opposition parties are boycotting the election, notably in the country's most populous region, Oromia. Others say they were prevented from campaigning in several parts of the country.

"My expectation is that (the election) would hopefully, with minor difficulties, be completed in a credible way,” opposition candidate Berhanu Nega with the Ethiopian Citizens for Social Justice party said while voting.

Ethiopia's election chief, Birtukan Midekssa, writing in The National Interest, acknowledged "serious challenges” but noted that more parties and candidates are contesting than ever before. "I call on the international community to support Ethiopia on its democratic journey, stressful and imperfect though it is,” she wrote in the U.S.-based magazine.

Abiy is also facing growing international criticism over the war in Ethiopia’s northern Tigray region, sparked in part because Tigray's now-fugitive leaders objected to Ethiopia postponing the election last year while citing COVID-19. No date has been set for voting in Tigray’s 38 constituencies.

Tigray’s former leaders, who are fighting Ethiopian forces and those from neighboring Eritrea, have reported fierce new combat in recent days. Ethiopia’s defense forces have called the fighting challenging because of the rough terrain. Thousands of civilians have been killed and famine has begun in what observers describe as a drawn-out guerrilla war.

Meanwhile, outbreaks of ethnic violence have killed hundreds of people in the Amhara, Oromia and Benishangul-Gumuz regions in recent months. One resident of the capital, who gave only his first name, Samuel, said he wouldn't be voting.

"Two or three years ago I would have voted for Abiy, but now there are a lot of troubles in our country,” he said. International concern has been growing about the election. The U.S. has said it is "gravely concerned about the environment under which these upcoming elections are to be held," and the European Union said it will not observe the vote after its requests to import communications equipment were denied.

In response, Ethiopia said external observers "are neither essential nor necessary to certify the credibility of an election,” although it has since welcomed observers deployed by the African Union.

The United Nations secretary-general has noted the "challenging” environment and warned against acts of violence.

"It is our duty to remain united and not the government’s,” one resident of the capital, Eskedar Teklegiorges, said over the weekend as hundreds of police officers paraded in a show of force ahead of the vote.

The next largest party, Ethiopian Citizens for Social Justice, was fielding 1,385 candidates. A total of 47 parties were contesting. "Last time we didn’t have a choice, but this is totally different,” voter Girmachew Asfaw said.