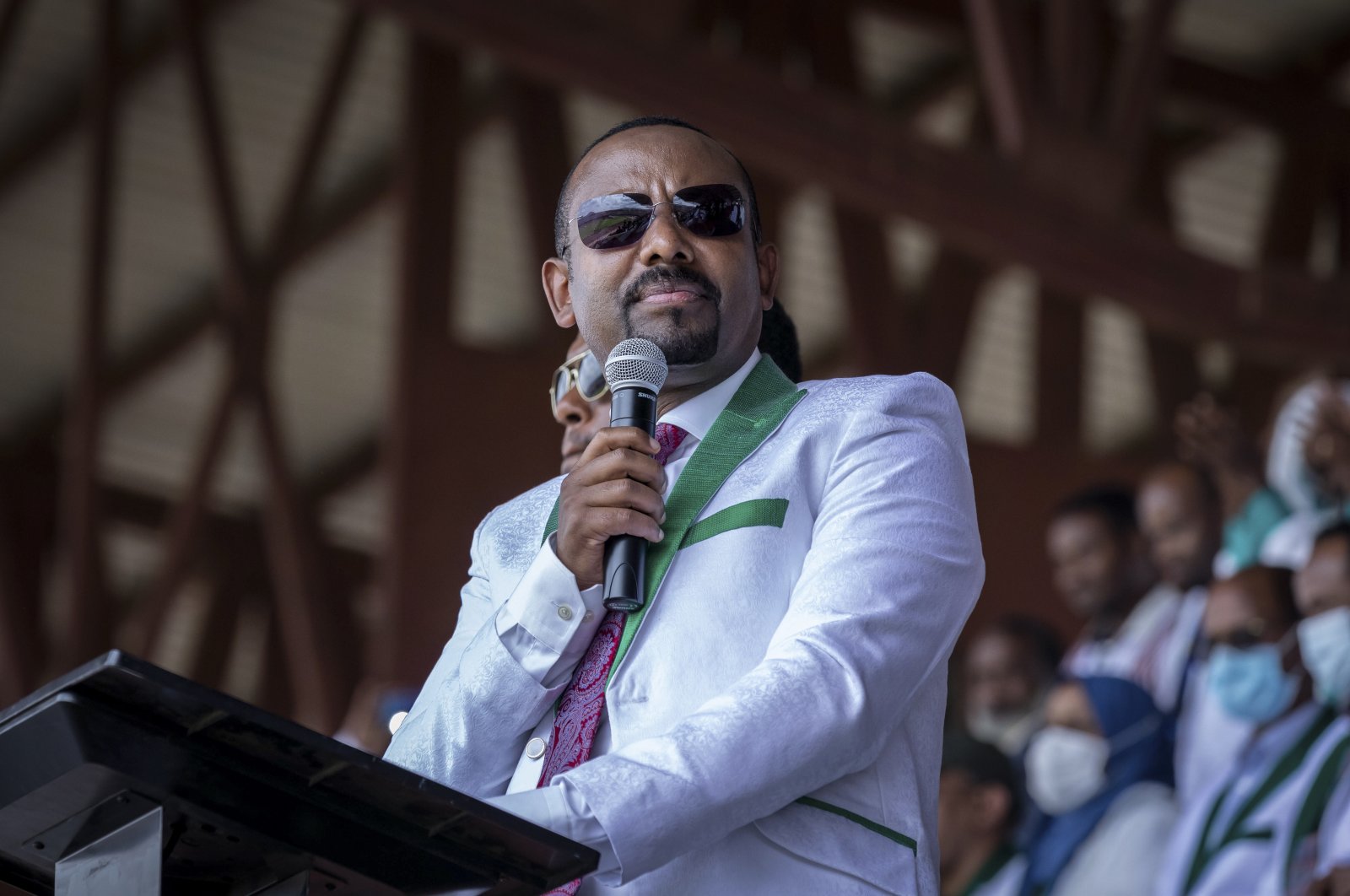 Ethiopia's Prime Minister Abiy Ahmed speaks at a final campaign rally at a stadium in the town of Jimma in the southwestern Oromia Region of Ethiopia, June 16, 2021. (AP Photo)
by Agencies
Oct 04, 2021 11:24 am

Ethiopian Prime Minister Abiy Ahmed has been sworn in for a second five-year term running a country in the grip of a nearly yearlong war.

"I, Abiy Ahmed Ali, today in the House of People's Representatives, accept the appointment as prime minister, as I pledge to undertake responsibly and with faith to the constitution the responsibility placed upon me by the people," he said while being sworn in by Supreme Court Chief Justice Meaza Ashenafi.

Abiy’s Prosperity Party was declared the winner of parliamentary elections earlier this year, in a vote criticized and at times boycotted by opposition parties, but described by some outside electoral observers as better run than those in the past.

Yet by the time voters cast their ballots, tens of thousands had been killed in the conflict in the northern Tigray region and hundreds of thousands faced famine-like conditions, according to the U.N., muddying the 2019 Nobel Peace Prize winner's once-glowing reputation.

Since then, fighting has spread to neighboring Afar and Amhara regions while Tigray has fallen under what the U.N. describes as a de facto humanitarian blockade, spurring fears of the mass starvation that turned Ethiopia into a byword for famine in the 1980s.

It is unclear whether Abiy's swearing-in will alter the course of the war, pitting government forces against the Tigray People's Liberation Front (TPLF) rebel group, which dominated national politics before he took power.

Abiy's office, which blames the rebels for starting the war last November with attacks on federal army camps, has said certain conciliatory measures, like declassifying the TPLF as a terrorist group, can only happen after a new government is formed.

"The position has been that any change in approach to the conflict with the forces from Tigray can only occur after the formation of a new government," said William Davison, senior Ethiopia analyst for the International Crisis Group (ICG), according to Agence France-Presse (AFP).

The 11-month war is weakening Ethiopia’s economy, once one of Africa’s fastest-growing, and threatening to isolate Abiy. Just three African heads of state – from Nigeria, Senegal and neighboring Somalia – were attending Monday’s ceremony.

Last week Ethiopia’s government faced condemnation from the United Nations, United States and several European nations after it expelled seven U.N. officials it accused of supporting the Tigray forces, who have been battling Ethiopian and allied forces. The officials left the country Sunday.

U.N. Secretary-General Antonio Guterres expressed "shock" over the decision and the U.N. has lodged a formal protest with Addis Ababa. Western powers feel "let down" by Abiy, a dynamic that will shape foreign relations during his second term, said Cameron Hudson, a senior fellow at the Atlantic Council's Africa Center.

"The West will likely now revert to a playbook it knows ... apply pressure where it can, engage where it must, and keep on the lookout for better alternatives," Hudson told AFP.

Abiy was appointed after several years of anti-government protests against the ruling TPLF-led coalition and promised to break with Ethiopia's authoritarian past, in part by holding the most democratic polls the country had ever seen.

The coalition, of which Abiy was a member, had claimed staggering majorities in the two previous elections, which observers said fell far short of international standards for fairness.

This year, some opposition parties, notably in Abiy's native Oromia region, opted to boycott the polls, complaining that their candidates had been arrested and their offices vandalized.

No voting occurred in Tigray, and races for 83 other federal parliamentary seats had to be delayed because of security or logistical issues.

Last week, authorities held elections for 47 of those seats, in the Somali, Harari and Southern Nations, Nationalities and Peoples' (SNNP) regions.

Those results, which will not have a significant bearing on the balance of power in parliament, are expected later this month.