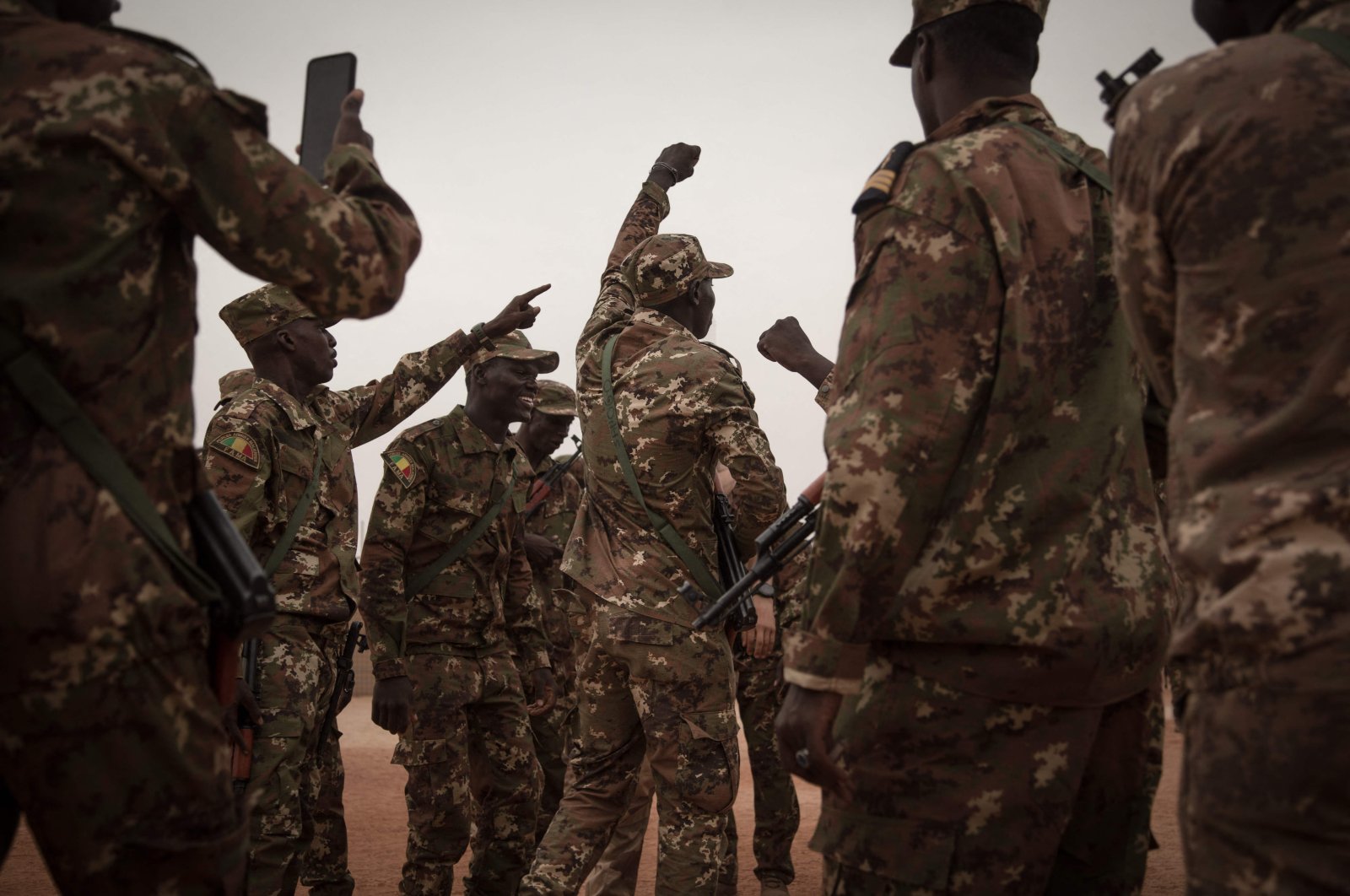 Malian soldiers dance after the handover ceremony of the Barkhane military base by the French army in Timbuktu, Mali, Dec. 14, 2021. (AFP Photo)
by Daily Sabah with AP Dec 15, 2021 11:00 am
RECOMMENDED

French forces left the city of Timbuktu late Tuesday, the latest sign that the former colonial power is drawing down its presence in northern Mali nearly nine years after driving extremists from power there in a military intervention.

The symbolic move comes amid fears about whether the Malian military can now step in and fend off the extremists, who have regrouped and expanded their reach even further southward since the 2013 offensive.

In a communique, the French military emphasized late Tuesday that the Malian military maintains "a strong garrison in Timbuktu,” in addition to nearly 2,200 U.N. peacekeepers who are permanently deployed there.

Residents told The Associated Press (AP) late Tuesday that the Malian military has occupied the former French military base.

The French military already has shut down its bases further north in Kidal and Tessalit but is maintaining its presence in Gao near a volatile border region where operations have been concentrated in recent years.

France announced earlier this year that it would be withdrawing more than 2,000 troops from the Sahel by early 2022, refocusing its military efforts on neutralizing extremist operations, and strengthening and training local armies.

The decision came amid mounting political instability in Mali, where Col. Assimi Goita carried out two coups in less than a year’s time before being sworn in as the country’s interim president. The international community has set a deadline for new democratic elections to be held by the end of February, though there are growing signs that will not happen.

On Sunday, the regional bloc known as Economic Community of West African States (ECOWAS) warned that Mali could face additional sanctions if more "concrete progress” is not made by Jan. 1 toward preparing for elections. The Community already has suspended Mali, and it slapped travel bans and asset freezes on members of the transitional government.

The junta has cited mounting insecurity throughout Mali as a reason why February’s deadline is not attainable.

The city of Timbuktu is significant for its role in the start of French military presence in Mali. On Feb. 2, 2013, in Timbuktu, former President François Hollande announced the start of France's military offensive in Mali. On Tuesday, the Malian flag replaced the French flag at a military base, where some 150 French soldiers remained in place, since France started its pull out.

The head of France’s Operation Barkhane campaign in Mali, General Etienne du Peyroux said that they “will be present in a different way."

“This is ultimately the aim of Operation Barkhane: To allow Mali to take its destiny into its own hands ... but always in partnership,” Peyroux said, according to Africanews.