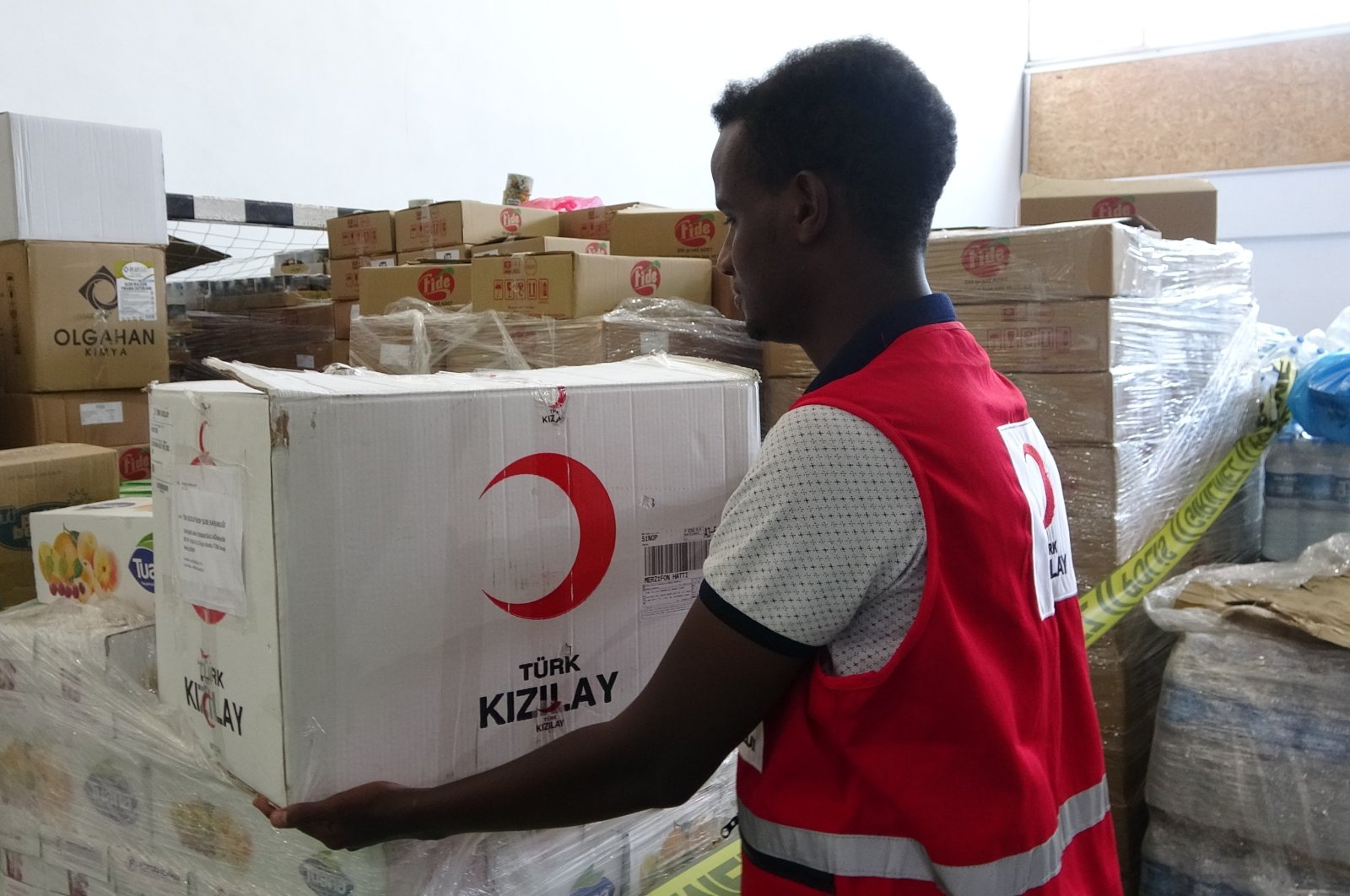 Turkey is continuing to make a name for itself on the African continent, especially with its charitable activities, business ties as well as its recent push to expand opportunities to learn the Turkish language and culture.

Turkey may be several thousand kilometers away from Africa, but the mere mention of the country's name brings a smile to many on the continent who have benefited from the generosity of its charities. The country's growing influence in Africa is not only aided by projects and policies implemented by the Turkish government through the Turkish Cooperation and Coordination Agency (TIKA), but also shaped by personal contributions made by the Turks, through various humanitarian organizations.

Many African countries have welcomed Turkey as a major international partner, which analysts have attributed to the fact it is a nation that is free of colonial history and exploitation.

Its model of combining diplomacy with a strong commitment that focuses on direct aid and mutually beneficial economic partnerships has been instrumental in winning local support and manifested real impact on the ground.

In 2005, it was granted observer status at the African Union and has since gained a new status as a new emerging economic and humanitarian power in Africa.

Its trade volume with Africa increased from around $5.4 billion in 2003 to around $26 billion in 2019, with $16 billion exports to Africa, according to data gleaned from the Turkish Statistical Institute, also known as TurkStat.

Forbes magazine reported in 2018 that trade between African nations and Turkey increased more than 600% in the last 15 years. Turkey increased its diplomatic presence on the continent to more than 40 embassies, and Turkish Airlines flies to over 50 African destinations. Turkey's interests in Africa rival those of France, which explains the recent tangled tussle from Paris to Ankara.

Various Turkish foundations including Foundation for Education and Solidarity (FES), Care Foundation, SENA Foundation, among others, work tirelessly in Uganda, going above and beyond to make sure their efforts help people to overcome the helplessness brought about by unemployment and economic inequalities. The major focus of these efforts is on education, health, agriculture, sanitation and infrastructure development.

The Turkish government through TIKA has several projects in Uganda, including newly-constructed classroom blocks at two schools, tailoring and fashion design at various locations and two radio stations, among others.

TIKA country representative to Uganda, Yahya Acu, told Anadolu Agency that he intends to respond to a request to establish a radio station in Western Uganda and connect with global communities.

Currently, radio is the leading source of information in Uganda, with more than 75% of the population relying on radio for news and information. This is because a radio is inexpensive and uses batteries that are affordable – many people have no reliable access to electricity that would allow them to regularly watch television, for instance.

Although other regions in Uganda have at least one radio station addressing Muslim-related issues, the entire Western region has no single radio doing the same.

Western Uganda Mufti AbdulMajid Kamara told Anadolu Agency (AA) that although charity sometimes gets misunderstood in a way that it is somehow demeaning to the recipient, we must recognize that at its heart it is a noble enterprise that plays a significant role in the bettering of human conditions.

"Charity comes in different shapes and sizes, but in whatever form it comes, acts of caring and kindness with no thought of recompense, help to enhance our shared quest for global solidarity and to live together in harmony and alleviate humanitarian crises and human suffering," he said.

"Now more than ever before, every abled individual needs to give more and give better, to relieve the increased suffering brought about by the COVID-19 crisis," said Saim Çelik, director for FES.

"Water has been our major focus recently as health officials have emphasized that washing one's hands regularly and properly is one of the most effective ways to prevent COVID-19. We have built several boreholes in different areas for people of all faiths to access free, clean water. When there is no clean water, people will have no choice but to rely on unsafe water or will not wash their hands, exposing themselves to COVID-19," he added.

According to the World Resources Institute, one in every three people across Africa is facing water scarcity.

"It is an indescribable feeling to support people in need," Akniyet Turganali, country representative for the Turkish Red Crescent (TRC) in South Sudan told AA.

He said work in the field could sometimes be hard or dangerous, but when they see the smile of children and the emotions of vulnerable people it gives them motivation and willingness to even work harder.

The TRC, which has been in war-affected South Sudan since 2017, works in close partnership with the South Sudan Red Cross serving thousands of vulnerable communities.

They often distribute food items, tents, and hygienic kits to thousands at camps for internally displaced people (IDPs) across the country, bringing joy to many helpless people.

"In April, TRC, gave food packages to hundreds of people during the Muslim holy month of Ramadan, in a drive carried out in collaboration with the Islamic Council of South Sudan and local development group MADA," Turganali said.

He said they provided 1,000 food parcels to centers for the blind, centers for the disabled, prisons, hospitals and the local community. The food packages included flour, beans, sugar, cooking oil and other items.

At one of their food distribution events, a young South Sudanese man is seen in a video waving the Turkish flag in appreciation. Another South Sudanese woman who identifies herself as only Joyce appreciates the assistance rendered to them by TRC.

Turganali told AA that the humanitarian aid group has mostly been implementing projects in the area of water, sanitation and hygiene promotion, though they are also engaged in support activities such as visiting orphanages and meeting essential needs of children there such as shoes, clothes, food items, household items, hygiene items among others.

He said TRC has also built latrines and shower units at the Nimule Hospital near the South Sudan-Uganda border to support COVID-19 treatment in the hospital.

"Having said this, I would like to highlight that TRC is always supporting South Sudan Red Cross to reach the most vulnerable people in the country," he added.

TRC has also dug wells to bring clean water to deprived communities in the country.

Turganali said TRC in collaboration with South Sudan Red Cross helped thousands of people who had been pushed out of their homes by floods in Bor County last year.

Turkiye Diyanet Vakfi (TDV) is one of the Turkish charities working in South Africa and often helps people in neighboring countries including Lesotho and Eswatini.

The foundation, which works in cooperation with local partners including Jamiatul Ulama South Africa, Muslim Judicial Council, AwqafSA, Darul Uloom Zakariyya and al-Qaasim Islamic Center, has been doing charity work in the country since 2013.

Ahmet Yilmaz, the social affairs counselor at the Turkish Embassy in Pretoria, told AA that during the Eid al-Adha, or the Feast of Sacrifice, this year, Diyanet distributed meat to more than 85,000 needy families in South Africa and Lesotho.

Yilmaz said they gave out meat between July 22 and Aug. 3, in nearly 100 locations across the country, including major South African cities such as Cape Town, Durban, Johannesburg and Pretoria.

The Diyanet Foundation, which has been carrying out meat distribution projects in South Africa for the past eight years, had its program this year headed by Yilmaz, who was appointed to the position in February.

Yilmaz said they also arranged a Ramadan food distribution program in cooperation with their South African partner organizations this year to deliver food packages to 800 families in Johannesburg, Pretoria and Cape Town.

"Whenever the holy month of Ramadan or Eid approach, I'm sure I will not go hungry. Our Turkish friends will provide us with food," Mujahid Ali, a 55-year-old father of four, told AA in Crosby, south of Johannesburg.

The South African Muslim community in the historic township of Soweto also praised and thanked the Turkish government and its people for assisting them in renovating a mosque in their community.

"On behalf of the community of Soweto, we are grateful and appreciate the help and support that the Turkish government has given us in renovating our mosque," Luqmaan Mogapi, head of communications at the Masjidul Umma in Soweto, told Anadolu Agency.

There are several Turkish organizations working in South Africa, in different fields, and not necessarily in the charity sector. These include TIKA, the Yunus Emre Institute (YEE), which promotes Turkish culture, and the Maarif foundation, an educational arm of the Turkish government, among others.

Although TIKA is not a charity organization but a development aid agency, it has helped people across Southern Africa during times of need.