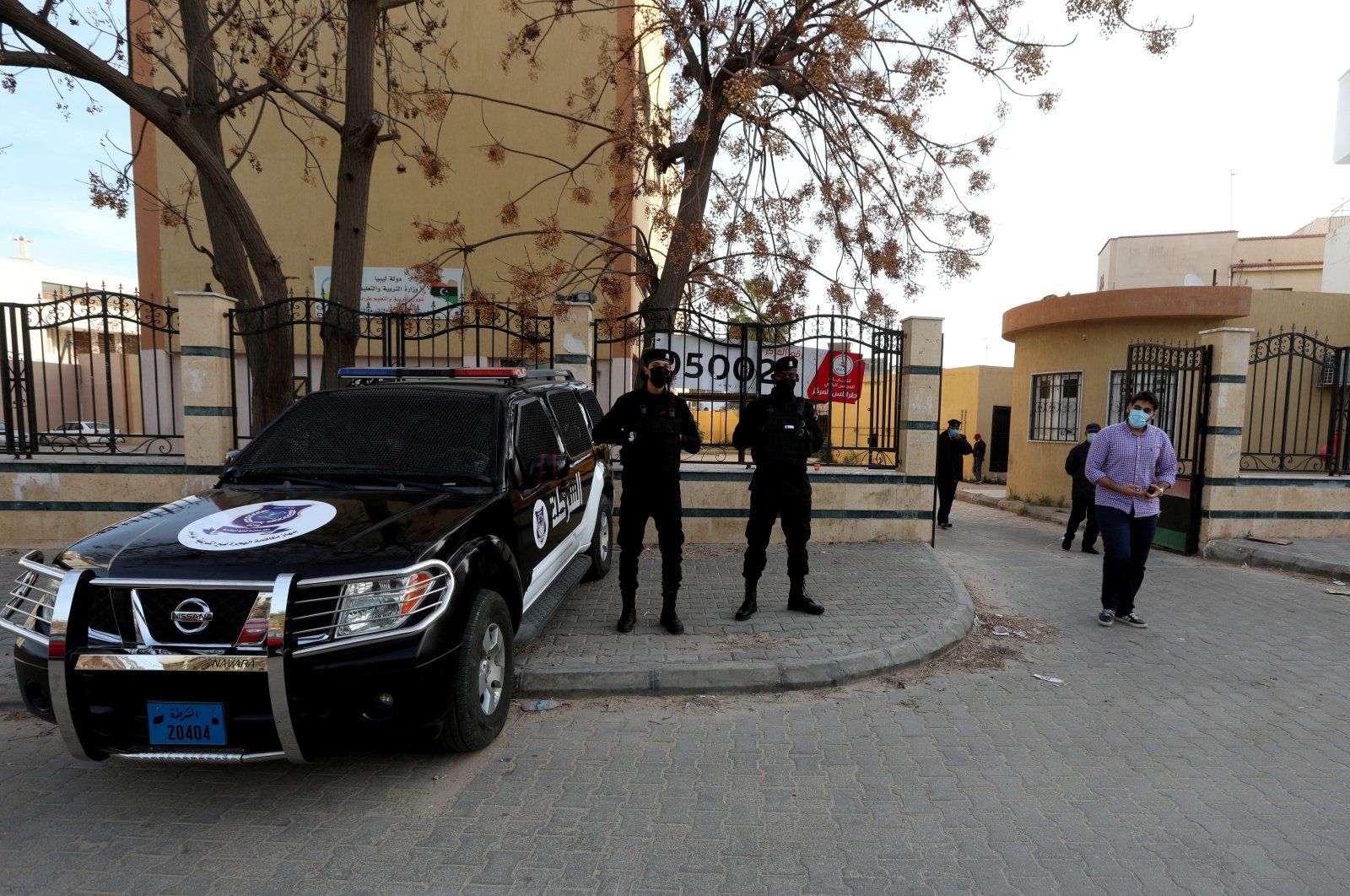 Security personnel stand guard near a polling station during the municipal elections in Tripoli, Libya, Feb. 6, 2021. (REUTERS Photo)
by DAILY SABAH WITH AGENCIES Dec 12, 2021 11:43 am
RECOMMENDED

Libya's election commission on Saturday delayed the publication of a final list of candidates for the presidential election scheduled to take place in less than two weeks.

It is just the latest twist in a United Nations-led effort targeting Dec. 24 presidential polls intended to help the oil-rich North African country move past a decade of violence.

The process has been undermined by bitter divisions over the legal basis for the elections, their dates, and who should be allowed to run, with a string of controversial figures stepping forward.

Analyst Jalel Harchaoui of the Global Initiative think tank said the "inevitable" consequence of the latest procedural delay was the postponement of polling day.

The first round of the presidential election "cannot take place on Dec. 24 because the candidates have the right to two weeks of official campaigning after the publication of the definitive list," Harchaoui told Agence France-Presse (AFP).

The election commission did not give a new date for issuing the list.

Rules governing the ballot – which would be the first time a Libyan head of state is chosen by universal suffrage – dictate that the commission should publish the list of candidates two weeks after final court rulings and appeals related to candidacies.

On Dec. 2 a Libyan court reinstated Seif al-Islam Gadhafi, a son of slain dictator Moammar Gadhafi, as a candidate.

A day earlier, an appeals court in Tripoli rejected petitions against the candidacy of interim Prime Minister Abdul Hamid Dbeibah, who heads the Tripoli-based unity government established in March and who is charged with leading the country to presidential and legislative elections.

The coordinator of the U.N. mission in Libya, Raisedon Zenenga, met with Emad al-Sayeh, the elections commission chief, on Saturday to discuss the "current state and trajectory of the electoral process," the U.N. mission said.

He commended the commission for the progress it had made on technical preparations but "stressed the importance of addressing emerging political and technical challenges that could disrupt progress."

Libya descended into chaos with the NATO-backed 2011 revolt that overthrew and killed Moammar Gadhafi.

A year of relative peace followed an October 2020 cease-fire between warring eastern and western camps, but analysts have warned that violence could easily flare-up again surrounding the elections.

A statement on the election commission's website said it must still adopt a series of judicial and legal measures "before proceeding to the publication of the definitive list of candidates and the start of their electoral campaign."

It added that the success of the electoral process cannot be borne solely by the elections commission "since the results will cast a shadow over the present and future of the country."

The commission said it is being careful not to limit its role to implementing the law, but ensuring that its functions extend to "correct interpretation of the law."

It is saying that it can't publish the list because it anticipates a judicial challenge that could shake the eligibility process, according to Harchaoui.

Also, the presence of foreign fighters and mercenaries in Libya still poses a threat to peace and stability in the country. Khalid al-Mishri, chairperson of the Libyan State Supreme Council, said Saturday that there are more than 7,000 mercenaries affiliated with the Russian security company Wagner in the country.

In April 2019, Haftar and his forces, backed by Egypt, Russia, France and the United Arab Emirates (UAE), launched an offensive to try and capture the capital, Tripoli. His 14-month long campaign collapsed, and the fall of Tripoli was prevented after Turkey stepped up its military support of the U.N.-backed government.

In 2019, Ankara signed a maritime delimitation agreement with Libya's Government of National Accord (GNA) over the Eastern Mediterranean that provided a legal framework to prevent any fait accompli by regional states. The two countries also signed a military cooperation accord. According to a deal with the legitimate government in Libya, Turkey sent troops to shore up the U.N.-recognized government in Tripoli while Russia and other countries, including France, supported the eastern-based illegitimate forces led by warlord Haftar.