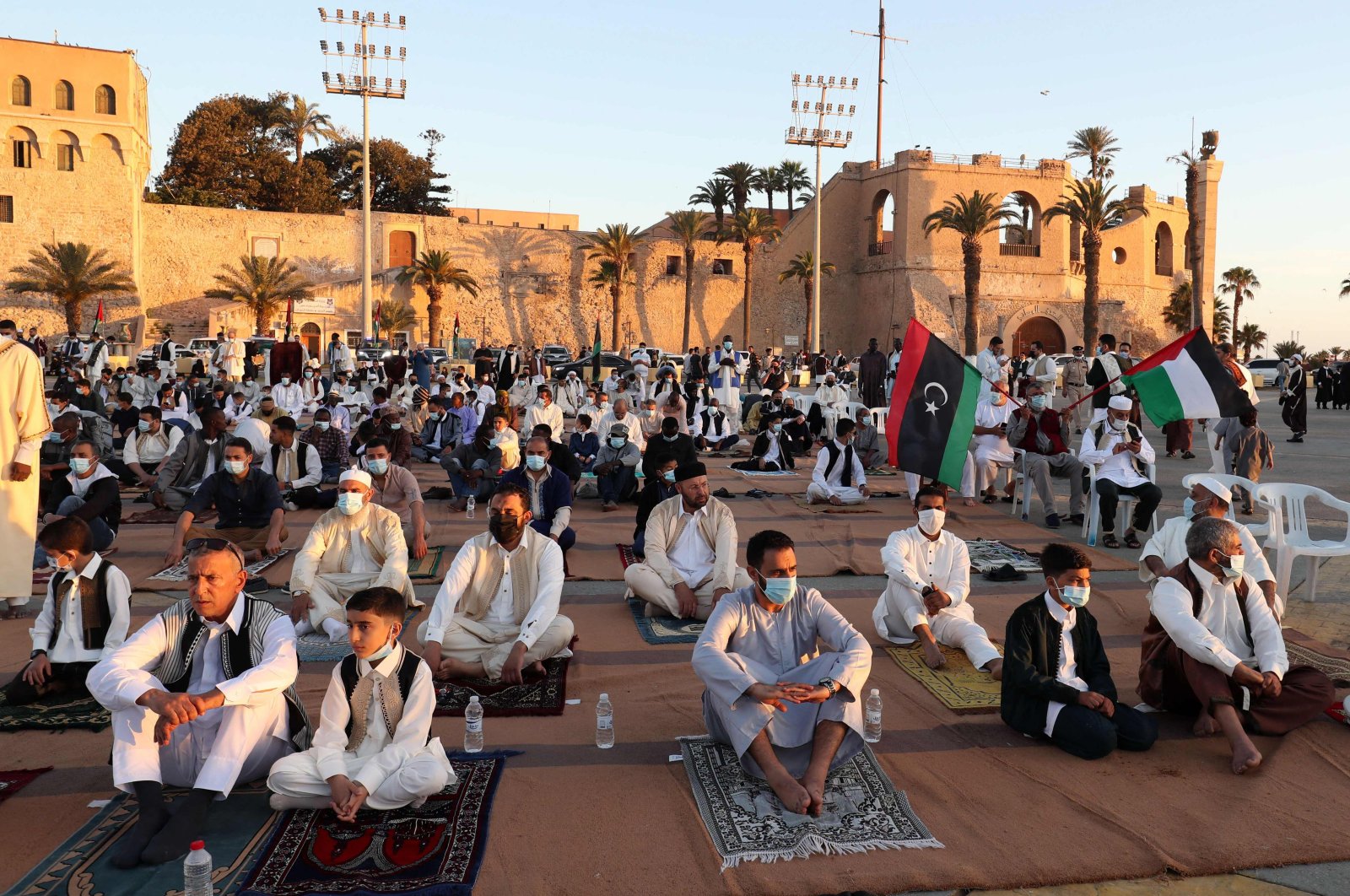 Libyan Muslim worshippers gather to perform the Eid al-Fitr prayers at Martyrs Square marking the end of the holy fasting month of Ramadan, at the capital Tripoli, Libya, May 13, 2021. (Photo by Mahmud Turkia via AFP)
by ASSOCIATED PRESS May 16, 2021 11:42 am
RECOMMENDED

The chief of the United Nations has reiterated his call for the withdrawal of foreign fighters and mercenaries in Libya and an end to violations of the U.N. arms embargo, saying these are “critical elements” for lasting peace in the North African country and the region.

Secretary-General Antonio Guterres said in a report to the U.N. Security Council obtained by The Associated Press (AP) that the smooth transfer of power to a new interim government, which took power in March, “brings renewed hope for the reunification of the country and its institutions and for a lasting peace.”

But he said progress must continue on the political, economic and security tracks to enable elections to go ahead Dec. 24.

Libya has been wracked by chaos since a NATO-backed uprising toppled longtime dictator Moammar Gadhafi in 2011, and split the oil-rich North African country between a U.N.-supported Government of National Accord (GNA) in the capital Tripoli, and rival authorities based in the country’s east, each backed by armed groups and foreign governments.

While Turkey had been the main backer of the GNA along with Qatar, illegitimate eastern-based forces loyal to putschist Gen. Khalifa Haftar were supported by Russia, France, Egypt and the United Arab Emirates (UAE).

In April 2019, east-based commander Haftar and his forces launched an offensive to try and capture Tripoli. His 14-month-long campaign collapsed after Turkey stepped up its military support of the U.N.-backed government. An October cease-fire agreement that included a demand for all foreign fighters and mercenaries to leave Libya within 90 days led to a deal for the transitional government and December elections.

The U.N. estimated in December that there were at least 20,000 foreign fighters and mercenaries in Libya, including Syrians, Russians, Sudanese and Chadians. But at an informal council meeting in late April, speakers said there were more than 20,000, including 13,000 Syrians and 11,000 Sudanese, according to diplomats.

Guterres said in the new report that while the cease-fire continues to hold, the U.N. political mission in Libya has received reports of fortifications and defensive positions being set up in central Libya on the key route between the strategic city of Sirte, the gateway to the country's major oil fields and export terminals, and Jufra.

“Despite the commitments made by the parties, air cargo activities reportedly continued with flights to various air bases in Libya’s western and eastern regions,” the secretary-general said. “Reports indicated that there was no reduction of foreign fighters or of their activities in central Libya.”

Guterres said the Government of National Unity must prioritize security sector reforms, including filling senior civilian and military appointments, producing a road map for reunifying the Libyan Army and addressing the proliferation of armed groups.

“Bringing one of the world’s largest uncontrolled stocks of arms and ammunition under state control is vital,” he said. “I reiterate my call on member states and Libyan national actors to put an end to violations of the arms embargo and to facilitate the withdrawal of foreign fighters and mercenaries from the country.”

Last month, the U.N. Security Council approved a resolution urging all foreign forces and mercenaries to leave Libya and authorizing a small U.N. team to monitor the cease-fire agreement. In an April 7 letter to the council, Guterres proposed an initial maximum of 60 monitors for a phased deployment as part of the U.N. mission, known as the United Nations Support Mission in Libya (UNSMIL).

In his new report, Guterres said that the monitors’ deployment to Libya is contingent on the U.N. General Assembly approving the resources to cover security, logistical, medical and operational requirements, which will be submitted “in the near future.”

He also raised the topic of human rights violations, especially the continuing detention of migrants and refugees. According to the International Organization for Migration’s most recent report, there are more than 571,000 migrants in Libya. And as of May 2, Guterres said over 4,300 migrants and refugees were being held in detention centers across the country.

Guterres called on Libyan authorities to release migrants and refugees from detention centers “on an urgent basis” and put in place measures to protect them from sexual violence.