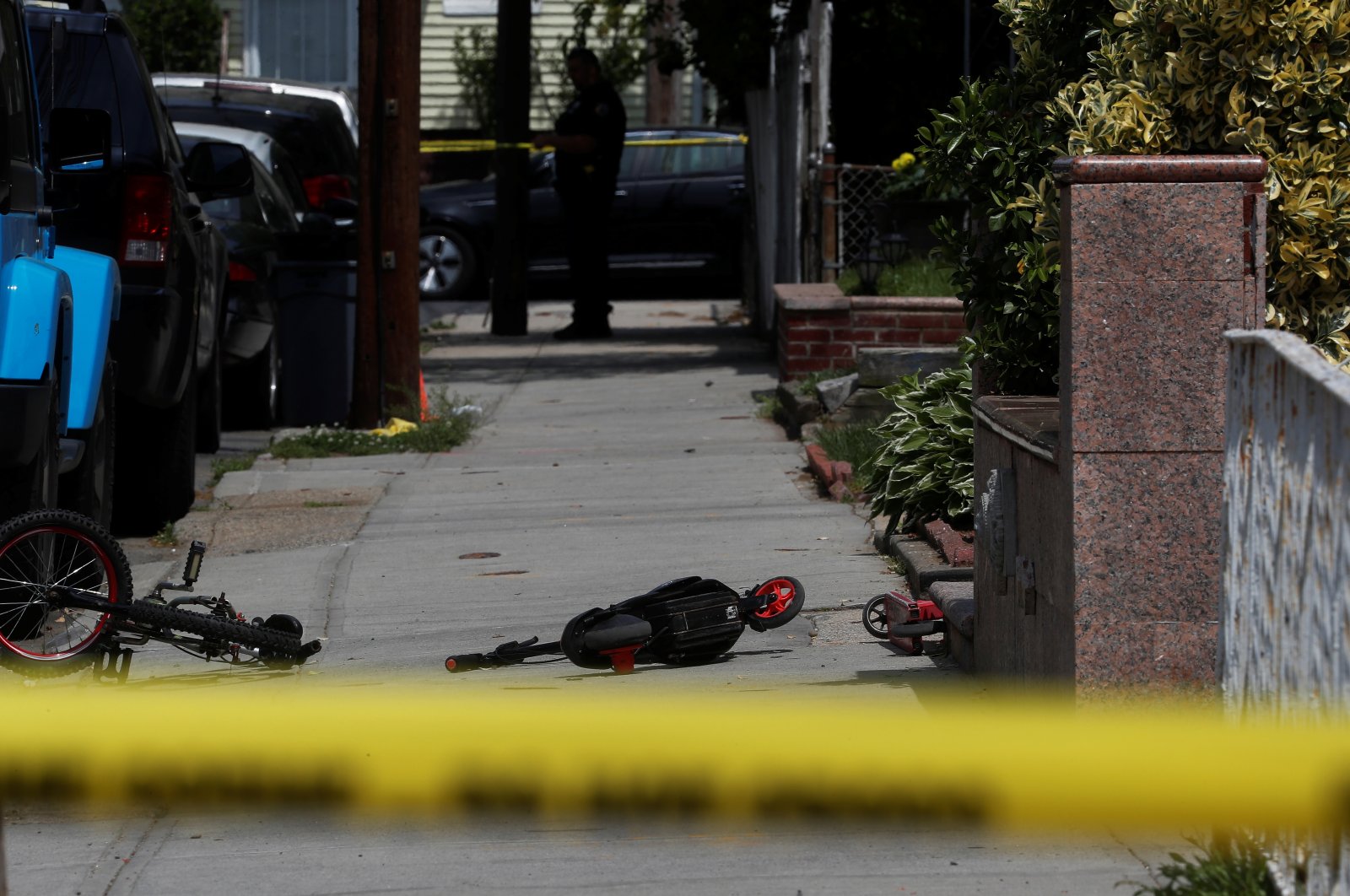 A New York police officer stands by police tape while small scooters and a bicycle lay on the sidewalk at a crime scene where three people were wounded, including an 8-year-old child, in a drive-by shooting in the Queens borough of New York City, the U.S., May 20, 2021. (Reuters Photo)
by French Press Agency - AFP
May 24, 2021 1:18 pm

A spate of shootings across the United States left a dozen people dead and about 50 injured over the weekend, just a month after President Joe Biden last month called the country's gun violence an "epidemic."

Shooting incidents included deaths in New Jersey, South Carolina, Georgia, Ohio and Minnesota. In total, the attacks claimed 12 lives and wounded at least 49 others. Two people died when gunfire broke out at a house party in Camden, New Jersey, Saturday night, and at least 12 people were injured, according to police.

In South Carolina, one 14-year-old girl was killed and 14 people wounded at a concert. Police in Atlanta, Georgia, found three gunshot victims early Sunday after responding to a call about shots fired. All three victims were pronounced dead at the scene, US media reported.

Three others were killed and eight injured outside a bar in Youngstown, Ohio, early Sunday morning, while a 16-year-old girl was killed and seven people injured in a park in Columbus.

A deadly shooting also occurred in Minneapolis, Minnesota, the night before supporters and relatives of George Floyd, the black man murdered by a white former police officer last spring, held a march Sunday on the first anniversary of his death.

One person was killed and eight injured, with one victim in critical condition. Minneapolis police told Agence France-Presse (AFP) that one suspect in the shooting had been arrested, while a second suspect had died.

The U.S. has suffered a series of mass shootings in recent months, including at a FedEx facility in Indianapolis, an office building in California, a grocery store in Boulder, Colorado – as well as a birthday party in the same city a few weeks later – and at several spas in Atlanta.

Biden has introduced six executive measures aimed at tamping down the crisis, including a proposed rule to halt "ghost guns," as firearms built from home kits are known, and boosting support for agencies involved in tackling community violence. In addition to mass shootings, gun violence in general – including less-publicized incidents often involving family members or acquaintances – has surged across the U.S. last year.

Gun sales jumped at the beginning of the COVID-19 pandemic. Overall, 2020 was one of the most violent years in the U.S. in decades. So far this year, there have been at least 200 mass shootings in the United States, according to the Gun Violence Archive.