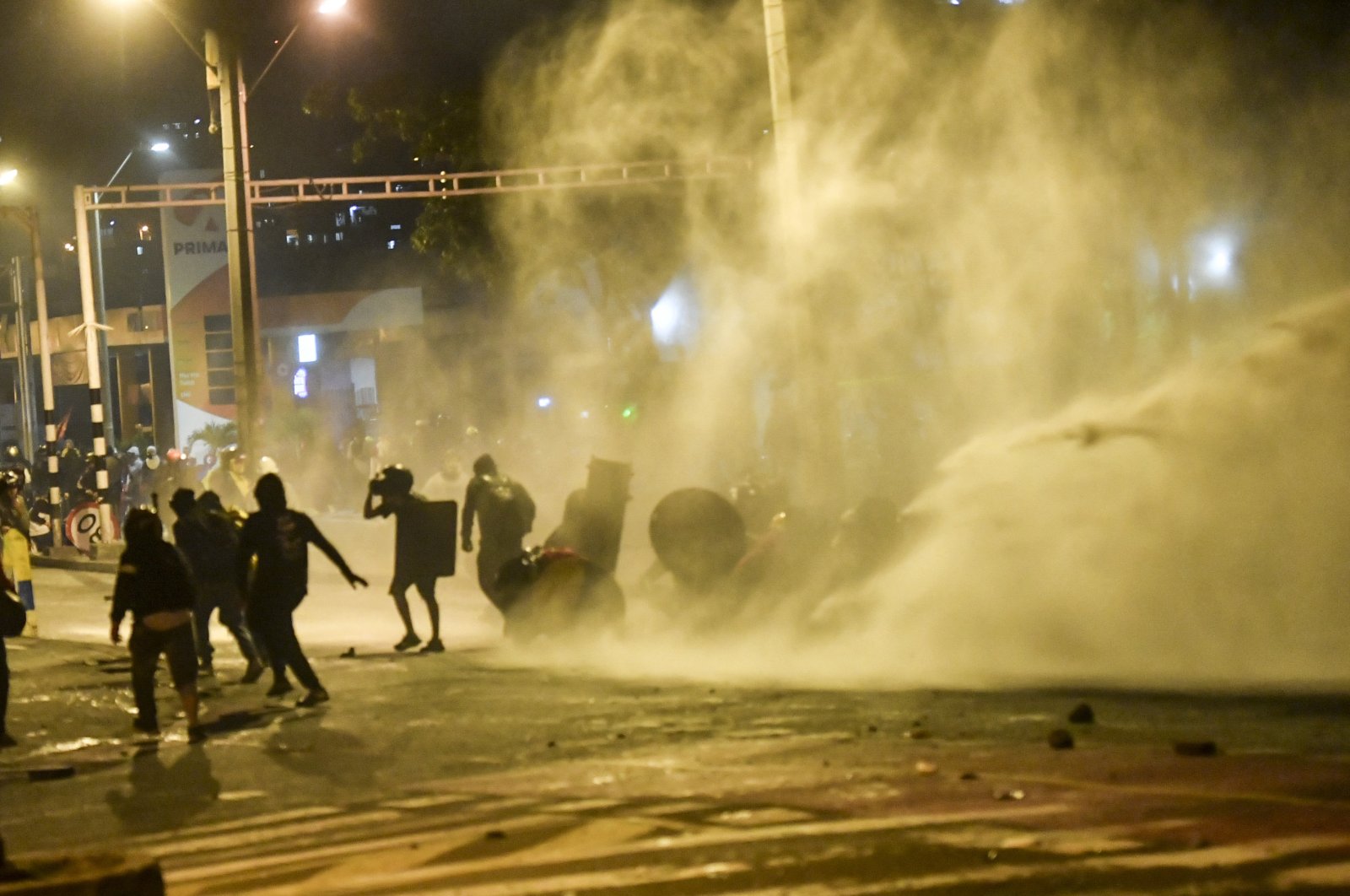 Demonstrators clash with riot police during a protest against the government of Colombian President Ivan Duque in Medellin, Colombia on June 9, 2021. (AFP Photo)
by French Press Agency - AFP Jun 10, 2021 11:18 am
RECOMMENDED

Anti-government protests renewed across Colombia Wednesday with thousands of people taking to the streets to demand an end to police repression and more favorable policies from President Ivan Duque to mitigate the economic impact of the COVID-19 pandemic.

Dozens of people have been killed in protests that erupted around the country on April 28, initially against a tax hike that would have mostly affected the middle classes, but which have morphed into a major anti-government movement.

The protests Wednesday were peaceful and colorful during the day but after nightfall deteriorated into clashes with police in the capital Bogota, Medellin in the northwest and other cities around the country.

The demonstrators demanded an end to police repression and more supportive public policies to alleviate the economic impact of the COVID-19 pandemic, which has plunged more than 40of the country's 50 million inhabitants into poverty.

"We need opportunities, and for education, health, to be a right and not a privilege," said 15-year-old high school student Sofia Perico, who came to protest with her family in front of a hotel in central Bogota where a delegation of the Inter-American Commission on Human Rights (IACHR) was holding meetings to evaluate the social turmoil. "We want a change in social policy, in economic policy ... the people simply cannot take it any longer," said teacher Dernir Galvis, another demonstrator.

The crisis has seen almost daily demonstrations and roadblocks over the past six weeks, affecting, in particular the southwest of the country, and violent clashes with the police. The June 6-10 visit by the IACHR comes after international criticism of police's violent repression of the anti-government protests.

In Bogota, a group of indigenous people tried to topple statues of Christopher Columbus and Queen Isabella on an avenue leading to El Dorado International Airport.

"We are here today to denounce these crimes against humanity that were committed more than 500 years ago, and which continue to be committed today. The ways of governing and repressing the people remain the same," Edgar Velasco, 36, told Agence France-Presse (AFP).

Presenting a report on the protests, the rights group said it had "documented multiple killings by police, as well as beatings, sexual abuse, and arbitrary detention of demonstrators and bystanders." "These brutal abuses are not isolated incidents by rogue officers, but rather the result of systemic shortcomings of the Colombian police," said Jose Miguel Vivanco, Americas director at HRW. "Comprehensive reform that clearly separates the police from the military and ensures adequate oversight and accountability is needed to ensure that these violations don't occur again."

HRW said it had received credible reports of 68 protest deaths and had confirmed 34. These included two police officers, one criminal investigator, and 31 demonstrators or bystanders. At least 20 of them appear to have been killed by police, with 16 of them killed by firearms. Conservative President Duque on Sunday announced efforts to "modernize" the police but has drawn criticism over the limited scope of the promised reforms.

Government delegates and protest leaders have held talks aimed at defusing the crisis, so far in vain.