Simple question still not so for Republicans: 'Did Biden win?' 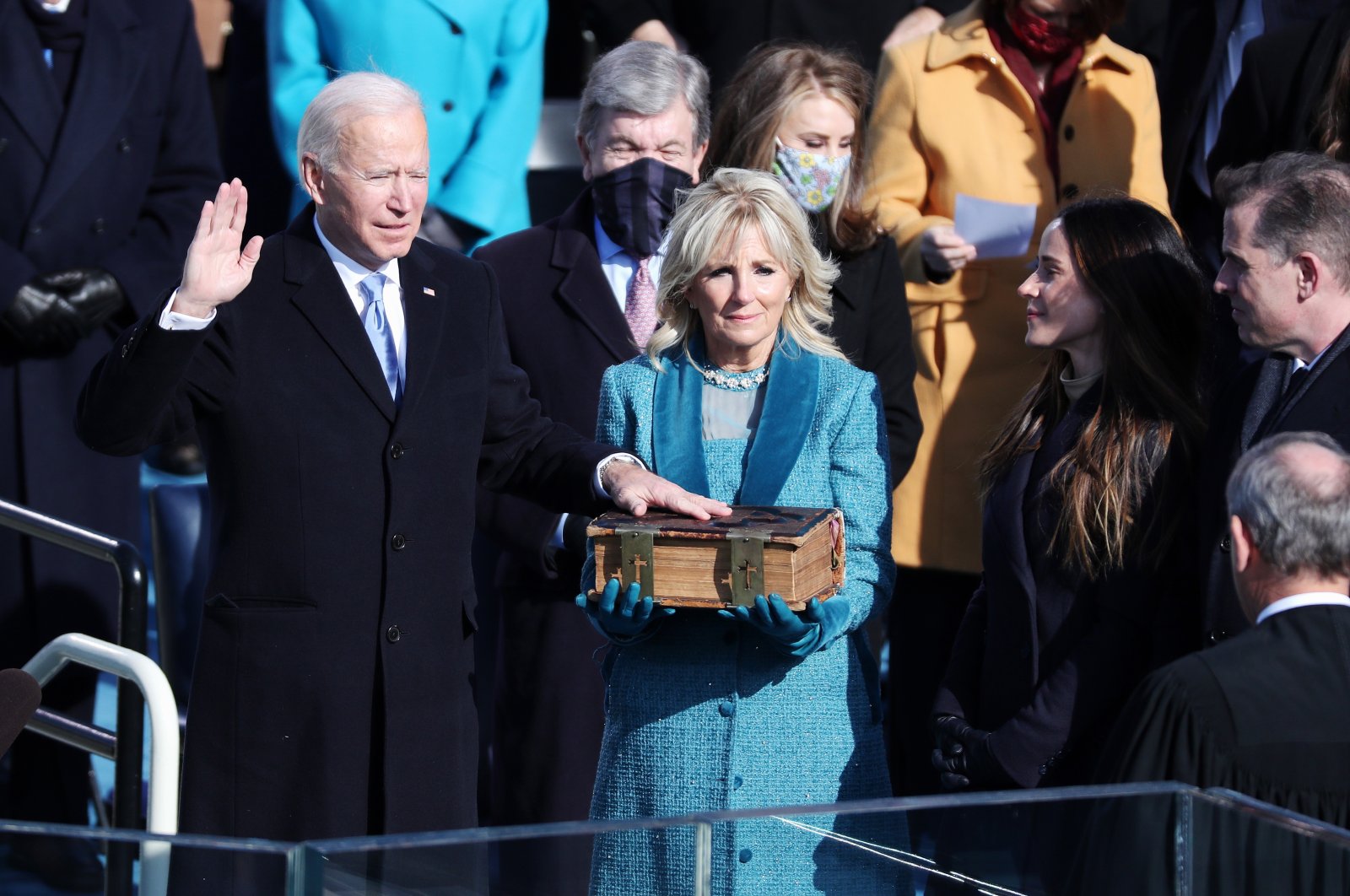 Joe Biden (L) stands with his wife Jill Biden (C) as he is given the oath of office by U.S. Supreme Court Chief Justice John Roberts during the presidential inauguration ceremony on the West Front of the U.S. Capitol in Washington, D.C., U.S., Jan. 20, 2021. (EPA Photo)
by ASSOCIATED PRESS Dec 18, 2021 1:53 pm
RECOMMENDED

Far be it for a politician to ever give a simple answer to the simplest of questions, but some Republicans are sinking to new lows as they search for any alternative to providing a simple "yes" or "no" to the question that will surely be front and center of debates heading into the 2022 election cycle. "Did Joe Biden win?"

Eleven months after the Democrat’s inauguration, Republican lawmakers and candidates across the country are squirming and stumbling rather than acknowledging the fact of Biden's victory in the 2020 presidential election. In debates and interviews, they offer circular statements or vague answers when asked whether they believe Biden won.

In Minnesota this week, five GOP candidates for governor came up with 1,400 other words when asked by conservative radio host Hugh Hewitt for an answer. That's 1,395 words too many for those counting at home.

On NBC's “Meet the Press” on Sunday, GOP Sen. Roger Marshall of Kansas would only concede: “Joe Biden was sworn into office.”

The hazy statements are one measure of election denialism within the Republican Party. Former President Donald Trump's lies about a stolen election have so taken hold among GOP voters that many of the party's candidates either believe them or fear the political repercussions of refuting Trump. That sets up a surreal dynamic for next year's elections, where the toughest question posed to GOP candidates – particularly in primaries – may be one with a one-word answer that they're reluctant to give.

Biden received more than 81 million votes to Trump’s 74 million, according to the tally of the Federal Election Commission. The tightest margin was in Arizona, where Biden won by 10,457 votes. More importantly, he won 306 votes in the Electoral College, more than the 270 required to become president. Trump got 232.

Even a GOP-led “audit” of votes in Arizona’s largest county came up with a Biden win. Dozens of state and federal courts, as well as the Trump administration's Justice Department, have dismissed claims of widespread voter fraud.

When The Associated Press (AP) set out to count every fraud claim in the states disputed by Trump, it found fewer than 475 potential cases – 15 hundredths of 1% of Biden's winning margin in those states.

The doubt has been fueled by Trump, who has argued without evidence that the election was “rigged" and has urged his supporters to reject the outcome. He's set out to oust fellow Republicans who voted to certify the results.

Kansas' Marshall was among five senators who voted against certifying the electoral votes for Arizona and Pennsylvania in January, the day a mob of Trump supporters stormed the U.S. Capitol in a violent effort to prevent the final step that sealed Biden's win.

While Marshall hangs his answer on process, other Republicans go further. Arizona Republican Rep. Andy Biggs, who was part of a group of GOP congressmen who pushed false claims, recently answered a question from a colleague about who won by saying flatly, "We don't know.”

“There’s the problem,” Rep. Jamie Raskin, a Maryland Democrat, replied at a hearing of the House Oversight Committee. “Donald Trump refused to accept the results, and unfortunately we have one of the world’s great political parties which has followed him off of the ledge of this electoral lunacy, and it’s dangerous for democracy.”

There are some Republicans who clearly, without squirming, acknowledge Biden’s win. Senate Majority Leader Mitch McConnell is among them, along with Utah Sen. Mitt Romney, who was the GOP's 2012 presidential nominee, and Nebraska Sen. Ben Sasse, for instance. Republican National Committee chairperson Ronna McDaniel uttered the words last month.

“Painfully, Joe Biden won the election, and it’s very painful to watch. He’s the president. We know that,” McDaniel told Washington reporters at a breakfast hosted by The Christian Science Monitor.

But it's clear not all Republicans know. In October, the second-ranking House Republican, Steve Scalise of Louisiana, repeatedly stopped short of disavowing Trump’s claims of fraud, asserting without evidence that “a number” of states “didn't follow” their election laws.

On Friday, Josh Mandel, a GOP candidate for Senate in Ohio, called for more investigations into the vote in battleground states. “I think Trump won,” he said in an interview on Hewitt's radio show.

“It is an important question and needs to be framed, I think, as I did. I expect it will be often asked and answered (or not) of many candidates in the year ahead,” Hewitt tweeted after the Minnesota debate.

The answers demonstrate the pressure for Republican primary candidates to appeal to, or at least not offend, the vocal Trump wing of the party, strategists say.

“In today’s grim Republican Party, the was-the-election-legit question has become a litmus test for whether you are truly loyal to the Republican Trumpist tribe or not,” said Mike Murphy, a veteran Republican strategist and Trump critic.

It took a while – that is, winning the Republican nomination for Virginia governor – for Glenn Youngkin to get there. In May, he said in an interview, “I mean, the reality is, and I have said this before, Joe Biden was legitimately elected our president."

But in February, though he stopped short of saying Biden “stole" the election, he was equally hesitant to declare Biden had been “legitimately elected," according to the nonpartisan political watchdog group Politifact.

Other candidates have moved in the other direction – away from the facts. In Ohio, where Republicans are vying for the nomination for an open Senate seat, candidate Bernie Moreno began airing an ad this week where he is quoted as saying, “President Trump says the election was stolen, and he’s right.”

Yet, just days after the election last year, Moreno urged conservatives on Twitter to “accept the results of the 140+ million votes cast,” and tweeted a congratulatory note to Biden for a “hard fought victory.”

On Wednesday, the discomfort for Republicans played out in full view from the debate stage in suburban Minneapolis.

Her answer: “He was certified by Congress as having won the Electoral College."