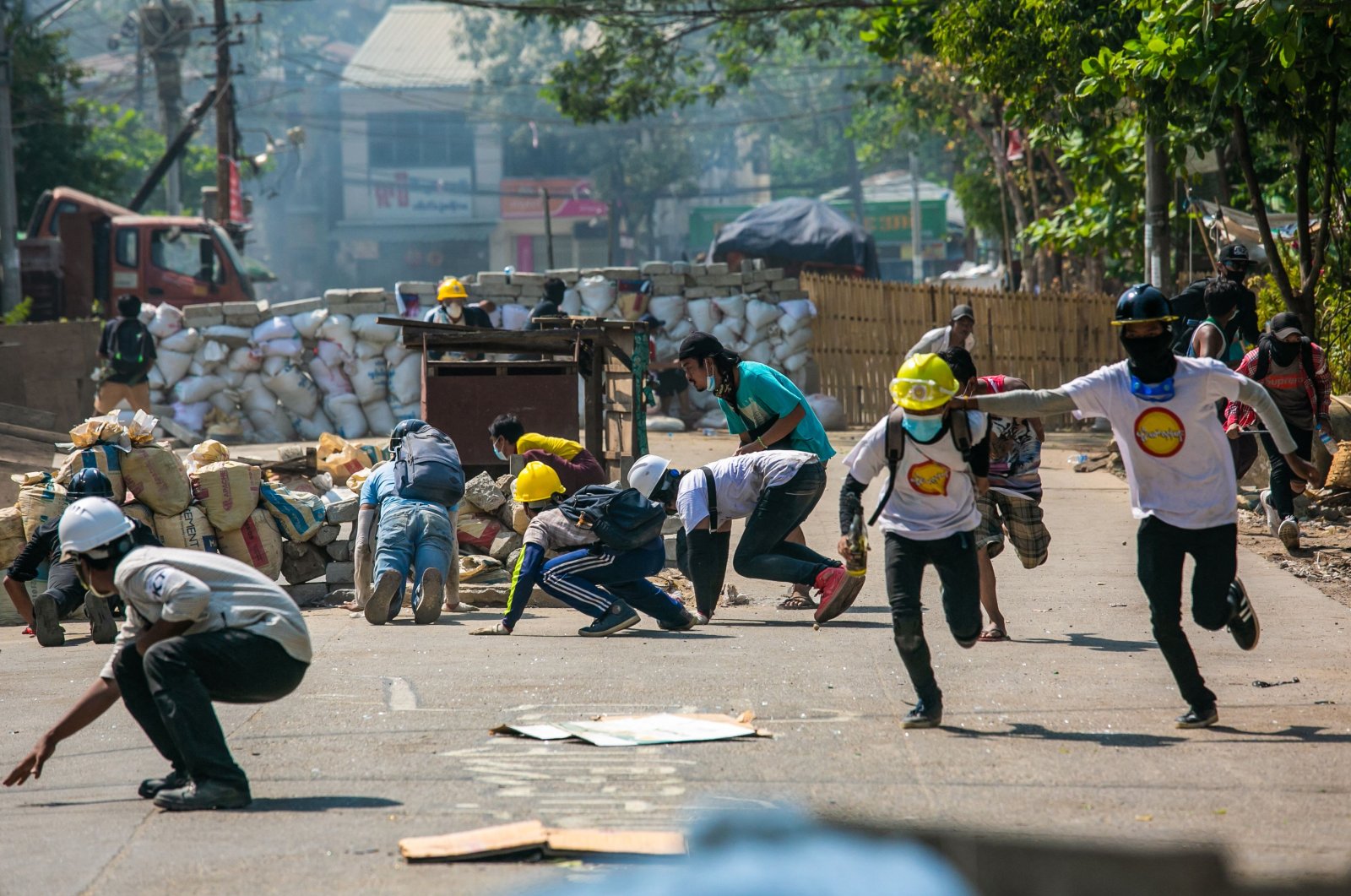 Protesters run during a crackdown by security forces on a demonstration against the military coup in Yangon's Thaketa township on March 19, 2021. (AFP Photo)
by Agencies Mar 20, 2021 11:46 am
RECOMMENDED

Asian nations and United Nations agencies issued harsh statements on Saturday against the Myanmar military's ongoing campaign of brutal repression against the anti-coup movement and protests.

A young man was shot and killed in one of the most turbulent neighborhoods of the main city of Yangon, a resident and media reported, taking the death toll since the Feb. 1 coup to 238, according to a tally by the Assistance Association for Political Prisoners activist group.

The bloodshed has not quelled public abhorrence for the return of military rule and anger over the ouster of the elected government and the detention of its leader, Aung San Suu Kyi. But some activists say they have had to adapt tactics.

"We protest where there are no police or military, then when we hear they're coming, we disperse quickly," campaigner Kyaw Min Htike told Reuters from Dawei in the south before he and others staged a brief rally outside the town center.

"I don't want to lose a single one of my comrades but we'll protest any way we can until our revolution prevails."

Some groups gather at night with candles and placards, then melt away after taking photographs. People also stage "unmanned" protests, with rows of placards with messages like "We will never stop until we get democracy" set up on a street.

On Saturday, dozens of demonstrators gathered in the second-biggest city of Mandalay. Several were injured when a vehicle drove into them and when police fired rubber bullets, a city news portal reported. It was not clear why the vehicle hit the protesters.

Residents of Mandalay helped striking railway workers move out of their state-supplied housing Saturday after the authorities said they would have to leave if they kept supporting the protest movement. People carried the workers' furniture and other household items to trucks, vans and pickup trucks.

There were small protests in other towns, including Kyaukme and Hsipaw in the northeast, Kawlin in the north, Hpa-an and Myawaddy in the east, Labutta in the Irrawaddy river delta, Myeik in the south and the central town of Yay Oo, according to news portals and social media images.

Hundreds marched in the town of Monywa and burned a copy of the 2008 constitution, which was drafted under military supervision and limits the powers of elected civilians, the Irrawaddy news portal reported.

U.N. Secretary-General Antonio Guterres on Friday condemned what he called the military's continuing brutal violence. A "firm, unified international response" was urgently needed, his spokesman quoted him as saying.

U.N. rapporteur Tom Andrews called for sanctions in response to the generals' "ruthless" attacks on people. "The world must respond by cutting their access to money and weapons. Now," he wrote on Twitter.

The U.S. House of Representatives approved legislation condemning the coup, and lawmakers decried the increasingly harsh tactics against the demonstrators.

Authorities have tightened restrictions on internet services, making information increasingly difficult to verify, and have clamped down on private media.

Facebook has banned all pages linked to the military over guidelines on inciting violence. On Saturday, Twitter said it had suspended the information ministry's page under the company's "platform manipulation and spam policy." The ministry has been posting news daily.

Western countries have repeatedly condemned the coup and the violence. Asian neighbors, who have for years abided by a code of not criticizing each other's problems, have also begun speaking out.

Indonesian President Joko Widodo, in some of the strongest comments yet by a regional leader, said he would ask Brunei, the chair of the Association of Southeast Asian Nations (ASEAN), to call an urgent meeting.

"Indonesia urges that the use of violence in Myanmar be stopped immediately so that there are no more victims," Jokowi said in a virtual address on Friday.

Malaysian Prime Minister Muhyiddin Yassin said he was appalled by the persistent use of lethal violence against unarmed civilians.

"We ... cannot afford to see our brotherly nation of Myanmar become so destabilized at the hands of a selected few, who seek to promote their own vested interests," he said.

Philippine Foreign Minister Teodoro Locsin said that ASEAN had to act. Singapore has also spoken out against the violence and the coup that triggered it.

But the military has shown no sign of being swayed and has defended its takeover, which derailed a slow transition to democracy in a country that was under strict military rule from a 1962 coup until the generals initiated reforms a decade ago.

The junta says a Nov. 8 election won by Suu Kyi's National League for Democracy (NLD) was fraudulent and its claims were ignored by the electoral commission. It has promised a new election but not set a date.

Suu Kyi, 75, faces accusations of bribery and other crimes that could see her banned from politics and jailed if convicted.

Her lawyer says the charges are trumped up. The Nobel peace laureate, who has campaigned for democracy in Myanmar for three decades, is being held at an undisclosed location.

Internet access has been severely restricted, private newspapers have been barred from publishing, and protesters, journalists and politicians have been arrested in large numbers.

The independent Assistance Association for Political Prisoners has verified 235 deaths and has said the actual total – including ones where verification has been difficult – "is likely much higher.” It said it has confirmed that 2,330 people have been arrested or charged since the coup, with 1,980 still detained or remaining charged.

The U.N. agencies UNICEF and UNESCO, along with the private humanitarian group Save the Children, on Friday issued a statement criticizing the occupation of education facilities across Myanmar by security forces as a serious violation of children’s rights.

It said security forces have reportedly occupied more than 60 schools and university campuses in 13 states and regions.

"It will exacerbate the learning crisis for almost 12 million children and youth in Myanmar, which was already under tremendous pressure as a result of the COVID-19 pandemic and ensuing widespread school closures,” said the statement. "Save the Children, UNESCO and UNICEF call on security forces to vacate occupied premises immediately and ensure that schools and educational facilities are not used by military or security personnel.

"Schools must be not used by security forces under any circumstances," it declared.