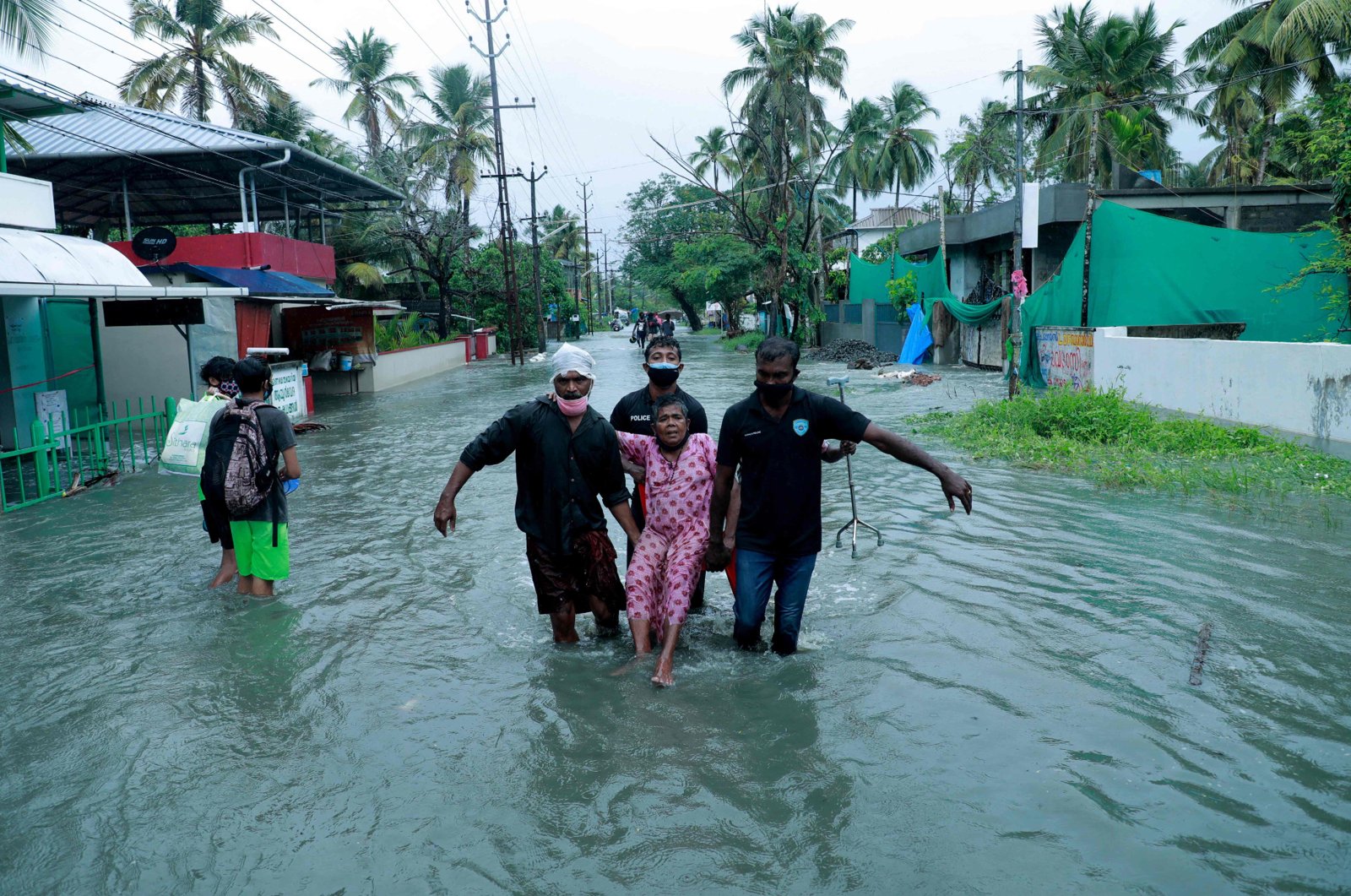 Police and rescue personnel evacuate a local resident through a flooded street in a coastal area after heavy rains under the influence of cyclone 'Tauktae' in Kochi, India, May 14, 2021. (AFP Photo)
by Agencies May 16, 2021 12:51 pm
RECOMMENDED

At least six people have been killed amid a severe cyclone that is roaring in the Arabian Sea off southwestern India with winds of up to 140 kilometers per hour (87 miles per hour), Indian officials said Sunday.

Tropical storm Tauktae, the season’s first major storm which has caused large areas to be inundated, houses destroyed and trees and electricity poles uprooted, has moved northwards past Kerala and Karnataka states and is currently located northwest of Goa.

It is expected to keep moving northwestwards and make a landfall on the coast of Gujarat state in the early hours of Tuesday according to a forecast by the Indian Meteorological Department.

The forecast warned of heavy damage along coastal Gujarat and said gusting wind speeds could reach 175 kilometres per hour (108.74 miles per hour).

Two persons have died in Kerala and four in Karnataka, the Indian Express newspaper reported.

Hundreds of thousands of people in these regions and adjacent Maharashtra, Gujarat and the federally administered territories of Daman and Diu have been moved to temporary relief shelters despite the risks associated with a fast-spreading second wave of the coronavirus in India.

Regions vulnerable to the cyclone needed to ensure power back-ups and stocks of essential medicines and oxygen especially at hospitals treating COVID-19 patients in case transport was disrupted, Prime Minister Narendra Modi said during a meeting with state officials on Saturday. More than 100 rescue teams of the National Disaster Response Force have been deployed all along the coast.

India and the region is no stranger to devastating cyclones, but changing climate patterns have caused them to become more intense, rather than more frequent.

Last cyclone season, K.J. Ramesh, the former chief of India’s weather agency, said the increased ferocity of the storms is caused by the temperature of the sea’s surface. Warm ocean water is where storms get their energy, and the amount of heat trapped in the top 700 meters (2,300 feet) of the seas has increased.